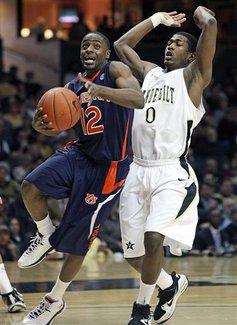 It’s time. Now. This week, next week. Jeff Lebo and his Auburn Tigers will either salvage something out of this season and Lebo will mount an argument that he should keep his job into 2010-2011, or they will not and he will not. Judgment, as they say, is about to be passed.

I’m well aware that for many Auburn fans–most, probably–that judgment came down against Sam Houston St. or Troy, with the now 1-4 SEC start after yet another total second-half collapse on the road last Saturday in Nashville more confirmation than anything. But for anyone looking to Auburn’s performance against its SEC peers as the deciding factor, nothing has, in fact, been decided just yet.

Oh, I know the second-half debacles in Knoxville and against the ‘Dores were truly debacletacular. I know that the near-miss against Kentucky that could have given the season some kind of signature moment–as John Caylor reminds us–hurts and hurts badly. I know that the easy home capitulation to South Carolina just isn’t the sort of thing that teams on their way to the postseason do.

But the bottom line is that going 1-4 against that particular five-game slate was just about as good as Auburn was ever going to do. W’s vs. the ‘Cats or at Tennessee or in Vandy’s Memorial Gym funhouse were never going to happen. (Or, at the very least, were damn sure unlikely.) Between the home date with the ‘Cocks and the road date at hapless LSU, Auburn could hope for a split or even a sweep, but also was in perfectly legitimate danger of getting swept themselves. Carolina’s just better, and the LSU game was on the road against a team that was every bit as desperate as Auburn. A win against Vandy would have been super-duper, but since we’re talking about a team that has to take its wins where it can get them, it’s the LSU game that was the must-win. And credit to Lebo and his players: they won it. (You see what happens, Auburn, when DeWayne Reed doesn’t double the number of shots of anyone else? You see?)

But now they have to keep winning. 1-4 was fine. (Sort of.) Wins where we can get them, right? Well, here come a bunch that can be gotten: vs. Ole Miss on Thursday, vs. Alabama Saturday, at Arkansas Feb. 6, vs. Georgia Feb. 10. Three home games. Three games against other teams in the SEC’s bottom half. 4-0 is possible, 3-1 a necessity. Anything worse, and we’re talking 3-6 with just seven games left (three of them roadies at top-half teams) to get back to .500 and an NIT berth. Even at 2-2: it’s over.

How does Auburn avoid that fate? By sticking with the share-the-ball approach that worked against both LSU and Vandy on offense, but more importantly, by playing 40 minutes of defense for the love of God. The ‘Dores finished up having scored 1.19 points a possession. LSU–LSU!–scored 1.15 as it took Auburn’s best offensive performance of the season (1.24 PPP, thanks to 33 free throws and a 10-of-22 outing from three-point land) to win by 4. I don’t go in for total points much, but it doesn’t matter how fast you play: when you’ve given up 80 points in four of your last five college basketball games, you’re just not playing good defense.

(Two quick player notes: as much as I’ve ragged on on him of late, Reed can be a productive player if he’ll just hit his damn free throws … and he’s now gone 20-of-27 over his last four games. That’s a trend, hopefully. Second, a big shout-out for Frankie Sullivan’s incredible performance against LSU: 15 points on just 5 shots (4-4 FT, 3-4 3’s), 4 boards, 2 steals, 3 assists, 0 turnovers, and to top it off the game-changing three with 1:10 left. Bad-ass.)

Two more games against ranked opponents in the ever-brutal SEC, and the second one should probably be shrugged off; a road date against a good team coming off of a crushing last-second loss with Keke Carrier still limited was never going to end well. 25 turnovers to 9 assists wasn’t going to help much, either.

The loss to Vandy stings, though; the Tigers jumped out in front, led by 7 at the break, and by 4 with 8 minutes left … before the ‘Dores exploded for an eight-point lead. Auburn then shaved seven of those points off the lead and had the final shot … only to not even get a shot off worth mentioning in the official recap. It’s not often a team both blows a lead and has a valiant comeback fall short in the same game, but it happened here, and that it happened against the same freaking Vanderbilt team that Fortner’s seemed to have such a problem getting over the hump with … well, I don’t blame the Tigers for not having a lot in the emotional tank for Kentucky.

As for the how of the loss, it’s pretty simple: Vandy shot 8-of-18 from deep (44 percent) and Auburn shot 3-of-13 (23 percent). There ya go. Auburn did everything else better–rebounds, interior shooting, free throws earned, you name it–but in a one-point game, the difference in three-point shooting enough.

Of course, maybe those outside shots would have been more open if Carrier had been able to play her usual 20-25 minutes instead of 3, after a hamstring injury. As has been the case throughout the season, even in defeat there’s reasons for optimism: no Carrier, a hot bunch of ‘Dores, a collective 3-of-12 effort from deep for Alli Smalley and Blanche Alverson … and still, Auburn took one of the country’s best (and best-coached) teams to the buzzer. Morgan Toles, the freshman point guard? 6 boards (!), 3 steals, 6 assists, 3 turnovers. Previously injured sophomore bench performers Chantel Hilliard, Parrisha Simmons, and Morgan Jennings? A combined 8-of-16 from the field for 19 points and 10 boards.

As we know: this team’ll be OK.