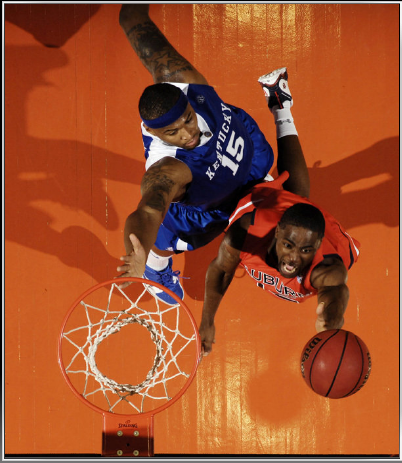 At least Auburn didn’t quit. That’s what I left Beard-Eves telling myself. By God they were outgunned and outmanned, but Reed and Knox and Hargrove and the rest didn’t quit. No sir.

Which is refreshing. Because it would have been really easy to surrender to a Kentucky team that seemed to get every call in the first half. It was like watching an Alabama football game. Kentucky is basketball royalty. They are undefeated and supposed to beat the Auburn’s of the college basketball world. I understand all this.

And referees are human. They are sports savvy and know what is what when it comes to athletics, but the unstated undercurrent of the sports world invades their unconscious mind. That’s how the Alabama offensive line can go 34 consecutive (or whatever obscene number) quarters without a holding call: human error.

My point is that Auburn had a chance (no thanks to the refs). And the reason they had that chance is because, for the first time I’ve seen this season, there was some sort of plan. Well, in the second half at least.

Knox was involved in the low post. Reed started passing out to the perimeter after driving into the lane. Sullivan hit threes. Andre Malone was active defensively and played solid minutes while Sullivan sat with foul trouble.

Contrast that with the first half when Reed, who took 25… twenty-freaking-five shots, was getting repeatedly rejected in his attempts at dribble drives. Knox and Lett looked lost in the paint, both on offense and defense. And the offensive strategy seemed to be let Reed drive into the paint and throw up ridiculous shots.

Halftime adjustments were made. Lebo can coach. I don’t think that’s ever been in question. Just everything not involving Xs and Os.

So there is hope for the 2009-2010 Fighting Jeff Lebos. At least a little hope. This team is not going to make the NCAA tournament or the NIT, barring Herculean efforts in SEC play.

And things aren’t looking too bright and shiny next season either, with the loss of Reed, Knox, Waller, Lett and Hargrove. That’s four starters and Auburn’s only two post players.

The ship is sinking and the lifeboats are missing.

In happier football news, loads of recruits were on hand to watch. Cam Newton made an appearance. He and Malzahn had a quick chat. All seems to be well on that front.

Luper and Roof were also present with their respective families. Roof and Malzahn ducked out early in the second half. Malzahn spent most of the game texting. (Yes, I was staring at him.)

Also present was Tennessee Titans’ head coach Jeff Fisher. He sat in the recruiting section and fell asleep. Or died. All I know is he didn’t move for 10-15 minutes. And when I looked back the last time he was gone. It was creepy.