I’ll start with this: I’m rooting for Texas. I made a statement earlier to the contrary, but with the BCS embarrassment campaign scuttled by TCU and Cincy’s gag jobs and the possibility of Nick Saban hoisting the crystal football drawing nearer and nearer, I’ve realized there’s no chance I’m going to watch the guys in the crimson jerseys take the field and think “that’s the team I want to win.” Hook ’em, I say, and say with vigor.

Here’s the problem: I still have an awfully hard time seeing the Tide get hooked tonight. Texas is and was a fraud, a team whose reputation has been built on a string of offensive tomato cans and Colt McCoy’s statistics from 2008. Even if they weren’t, every piece of evidence we’ve got suggests that SEC teams that reach this point are ready for whatever gets thrown at them: the league is 13-5 in BCS games and a perfect 5-0 in title games, with an average championship margin of 13 points. Don’t get your hopes up, Auburn fans.

But as horrible as some of the consequences of an Alabama win tonight are to contemplate, I’m here to tell you that there’s some positives, too–big ones, even. Blasphemy, I know, even here at TWER, and I’m well aware it’s far easier for me to say it typing five hours north of Phoenix rather than 30 minutes east of T-town. Still: I think it’s true.

Why? A countdown of the top five reasons:

5. Pro defections. Rolando McClain is gone with a capital-G no matter what happens tonight, but with the Tide having already accomplished everything they could accomplish, a win would conceivably help push Kareem Jackson out the door as well.

Unfortunately those are pretty much the only two early-departure candidates for the Tide this year, but there’ll be a bushelful next spring–Mark Ingram, Julio Jones, Barrett Jones, Marquis Maze, Mark Barron, Marcell Dareus, maybe another couple of guys. If ‘Bama trips up tonight and stumbles somewhere along the line next year, it’s going to be a lot easier for Saban to convince those guys to stick around for their senior year and take another shot at climbing the mountain.

4. I know this sounds crazy, but I really think it might be a net recruiting plus for Auburn. Hear me out: in-state, Alabama’s already as powerful as they’re ever going to get. They’ve already got the bandwagon filled to capacity, the most committed recruiter on the planet in charge, and of course the same historical advantages they’ve had since the Bear showed up. The kids that want to stand on top of the pedestal someone else built know where to go, and the kids who think it’d be more fun to knock them off of it and build their own know where they ought to go.

So how, if it’s possible at all, can the Tide improve their recruiting? By going national, which a win tonight will help them do. And even if it sounds awful from an Auburn perspective for the Tide to go out cherry-picking top-notch players from across the country, it’s not, because recruiting is a zero-sum game. When Alabama pulls a top recruit from, say, North Carolina, that’s one less slot for an in-state stud–and Auburn’s the program best-positioned to benefit from that.

In fact, we’re already seeing this in action. I didn’t mention North Carolina by accident–that’s where 2010 OLB recruit Alfy Hill is from. Hill was the commitment that seemed to tip Craig Sanders’ concerns about the crowded Tide depth chart from “there” to “more than just there,” and even if that was just one factor amongst many in Sanders’ decision to flip to Chizik and Co., it was one that surely didn’t hurt Auburn. If the Tide win tonight, we could be in for more of the same down the road.

2. Coaching defections. I don’t know how much of a sense of obligation Saban’s current crew feels towards getting the Tide all the way to the summit … but whatever sense there is, I think you can bank on it being fulfilled if they take home this year’s title. Say you’re Kirby Smart–you’ve just won a national title, your defense is already as good as it’s probably ever going to get, but you also know that you’re working for a coachbot that’s going to push you every bit as ruthlessly as he has already. Are you really not even going to listen to what your alma mater has to offer you? Are you really not going to even consider working for Richt instead and building your own D from something approaching scratch, without having Saban looking over your shoulder? (There’s a reason Smart had the opportunity to say “I’m going to be at Alabama next year” and passed like whoah.)

Not to mention that earning a national title makes each and every member of the Tide’s staff even more valuable to other programs looking to pick them off. Who’s the bigger commodity, Jim McElwain, Alabama offensive coordinator, or Jim McElwain, the coordinator who helped guide Alabama to a national championship? Which will play better to boosters and fans for Program X? Right.

1. There will simply be nowhere for Alabama to go but down. This is my favorite, and the biggest reason I’m not going to shed any tears if the Tide pulls it out this evening. Think about what happens if the Tide fail–yes, the schadenfreude will be rich and full*, and at the very least this guy 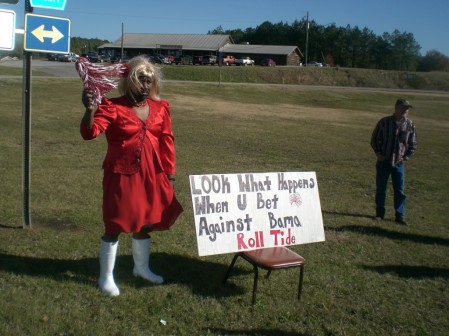 will probably find his life a little bit easier. But while we (and the Vol fans and Rebel fans and Gator fans and oh, pretty much everyone in the SEC) get our little spot of meaningless fun, everyone at Alabama–players, the Coachbot, assistants, even boosters–walks away

2. more determined than ever to put it all together and bring the title home next year.

Contrast that with what happens in the event of a victory, which Pat Riley (via Bill Simmons) memorably christened the “Disease of More.” I’ve already described how it might affect the Tide personnel-wise, but the Disease of More would go well beyond that: maybe practices just aren’t quite as sharp as they have been this year, maybe there’s one or two offseason workouts that aren’t as well-attended as they could be, maybe Player X decides screw it, I’m staying up ’til 2 a.m. the Friday night before a game playing Halo, because that little collective edge the team had in 2009 is gone.

Would the Disease of More affect the Coachbot himself? Probably not, but the tape of the first quarter of the Iron Bowl or the Tulane game from 2008 or even the UL-Monroe game from 2007 is all the evidence you need that even if he’s not, his players remain all too human. Or, hell, look at the last time Saban won a national title: his 2004 LSU team–Jamarcus Russell, Marcus Spears, Corey Webster, Jimbo and Muschamp as his coordinators–won their opener against Oregon St. on missed Beaver extra points, lost to Auburn two weeks later, then got crushed 45-16 in Athens two weeks after that. They were good, but they weren’t the kind of good they were before.

And if Alabama wins tonight, the same thing will happen to them. There’s a reason it’s so difficult to repeat a feat like winning a national championship. Just ask this year’s Florida–sure, they had a good year. An outstanding year by nearly any one else’s standards. But they should have been even better; the assemblage of talent they had on that team was mind-boggling. But they weren’t better. They were just good. And yessir, I’m ready for Alabama to get back to that.

Am I ready enough that I’d give up a Texas win tonight? No. The above list is, when all is said and done, just a silver lining to the giant black cloud that would be a Tide title and the unbearable endless “got 13?” shenanigans … a cloud I have no doubt is going to envelop us by the end of the evening.

But as silver linings go, you have to admit: it’s not bad. It could sure as hell be worse.