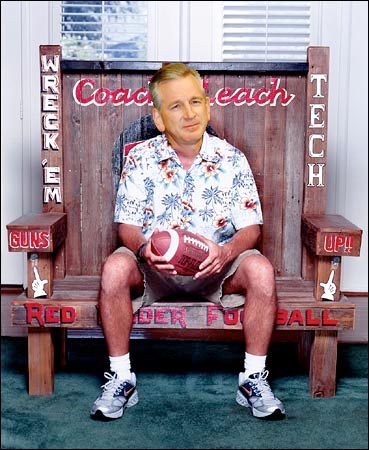 Texas media outlets and ESPN are throwing around Tubs’ name this morning as a possible replacement at Texas Tech for closet-punishment lovin’ Mike Leach.

Chuck Carlton of The Dallas Morning News breaks down his top five candidates, placing Tuberville’s odds of landing the spot at 10-1.

Kirk Bohls at Austin, Texas’ The Statesman has a column header that says “Nobody wins in the Mike Leach mess.” Uhhh … Tubs would be a winner. A big winner if he landed the job. Bohls ends his column by adding:

If I were on Tech’s search committee, I’d approach SMU’s June Jones, former Auburn coach Tommy Tuberville, and Sumlin and even look at Texas offensive coordinator Greg Davis, who has a sharp mind, can milk the most out of all sorts of quarterbacks and is the most decent, stand-up and professional coach at Texas.

Tech could do a lot worse.

Unfortunately, that’s exactly what we might see in the future.