*** I’m decreasingly one to link to Finebaum, but I caught Dye’s segment yesterday. And it was good.

You couldn’t look at the ballgame and see it any other way.

*** Sports Illustrated reporter/columnist and Auburn alum Selena Roberts definitely has some haters in the Auburn Family. But I did not consider myself one and in fact have defended her on occasion … but maybe I should change my mind.

From her article on Mark Ingram (you know, the cover story Jerry mentioned last week):

“[N]either of them [Joe Namath and Kenny Stabler] won a Heisman,” reminds Taylor Watson, Tide historian and curator of the Bear Bryant museum in Tuscaloosa. “Alabama has a long list of great players, but no one has ever won it. People here walk a fine line. We like to say how we’re only about winning and not Heisman trophies, but that talk might be different if Alabama had one.”

It’s a delicious topic to chew on for the patrons at Tuscaloosa’s Dreamland Bar-B-Que. They might not trade one of Alabama’s 12 national titles for a stiff-arming statue, but deep in their houndstooth souls, they crave the validation for historic significance.

*** Don’t fight that feeling: Auburn commit DJ Howard (“I close my eyes when I’m there, and even when I’m not there, and envision if I’d be comfortable. I came to the conclusion that I will be”) is still being courted – as a running back rather than an athlete, per his druthers – by Auburn with a lake. — [JDH – 9:20 a.m.]

*** GOT SIX?: Only because I saw a Got 12’er last night (and in belated response to Got 17?)… obviously it was sometime after 1979, but when exactly did the shirts change? 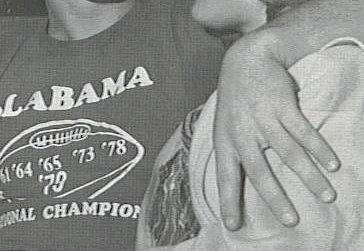