The good people of the SEC Power Poll have gotten together to name an All-SEC team for 2009 … and since I’m one of those good people, I’m helping out with the announcements by introducing the SECPP’s All-SEC defensive line.

But first, if you’re interested, you can click over to TeamSpeedKills to see the full list of announced honorees, to TSK for the TE selection, to Alligator Army for QBs, to Hey Jenny Slater for WRs, to RollBamaRoll for RBs, to Leftover Hot Dog for LBs, and to Gate 21 for both DBs and to see the rest of us put to shame in terms of graphic presentation.

As for the DL… 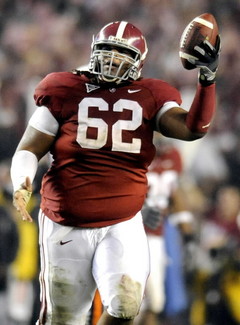 DT Terrence Cody, Alabama (unanimous selection). We can be honest: Cody’s individual numbers aren’t all that impressive. 25 total tackles, no sacks, 6 tackles-for-loss; he doesn’t rank in the league’s top 40 in any measurable statistic aside from blocked field goals. (He had two. You might remember them.) But for a run-stuffing colossus whose role isn’t to make the plays but to occupy whole swaths of the opposing offensive line and make sure that other members of Alabama’s defense can make plays, here’s the numbers that count: 79.23 rushing yards allowed per-game (2nd nationally, 1st SEC), 2.82 rushing yards allowed per-carry (8th nationally, 1st SEC), 11 points allowed per-game (1st nationally, 1st SEC). When you’re the player that kind of defense has been built around, you don’t need any more numbers than those.

DE Antonio Coleman, Auburn (10 votes). Here’s the scary part about Coleman’s 15.5 tackles-for-loss and 9 sacks, both SEC-leading totals: they could have easily been higher. Coleman (as Auburn fans know) spent most of the season battling a tendon injury in his wrist and playing with an unwieldy cast on his right forearm. As for what could have been had Coleman remained healthy throughout 2009, ask Bradley Sowell, the Ole Miss tackle who Coleman abused to the tune of two sacks and four TFLs to almost singlehandedly stall the Rebels’ second-half comeback. As for what Auburn’s defense could have been if Coleman had been more seriously injured or had left for the NFL after his junior season … kindly don’t ask anyone about that, thanks. 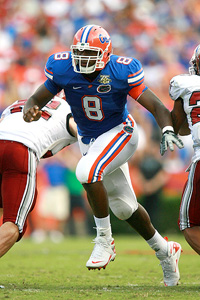 It’s beyond a shame (if also fair) that what many Florida fans will think of first when they think of Dunlap’s career will be his ill-timed DUI before this year’s SEC championship. Because Dunlap has otherwise given the Gators plenty of other, fonder memories to remember him by: 7.5 sacks this season, 9 tackles-for-loss, the MVP performance in last January’s BCS title game, and his reputation as one of the most feared and NFL-ready defenders in the SEC–a reputation that helped bookend DE Jermaine Cunningham earn 6 sacks of his own and the Gators finish the season 4th in the nation in total defense. 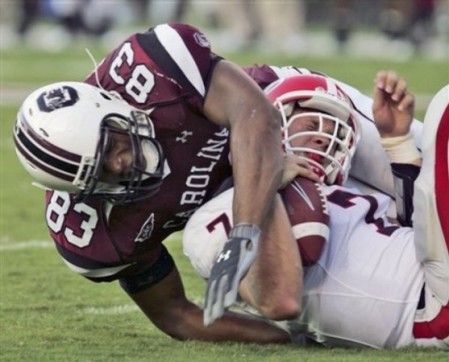 To stand out in this year’s crowd of SEC defensive ends took some doing, and that’s what both Houston and Matthews did. Houston did his part and then some for Willie Martinez’s beleaguered unit, tying Dunlap for second in the league with 7.5 sacks and registering 14.5 tackles-for-loss, all just as a sophomore. Matthews finished just behind on the sack chart with 7 to go with 10 TFLs, 44 tackles, three forced fumbles, and a major role in making one of the SEC’s youngest defenses also one of its most explosive.

3 votes: Malcolm Sheppard, DT, Arkansas. In an up-and-down year on the Hog defense, Sheppard’s tireless effort in the middle of the Arkansas defensive line were a rare constant. No SEC defensive tackle had more TFLs than Sheppard’s 10.

2 votes: Dan Williams, DT, Tennessee. The senior paired with Wes Brown to give the Vols one of the most consistently productive tackle pairings in the league–and a solid foundation to lean on even when injuries ravaged the Tennessee linebacking corps.

1 vote: Pernell McPhee, DE, Miss. St.; Jermaine Cunningham, DE, Florida; Marcel Dareus, DE/DT, Alabama; Jerrell Powe, DT, Ole Miss; Corey Peters, DT, Kentucky. Powe and Peters were anchors for the surprisingly stout run defenses at Ole Miss and Kentucky, respectively; McPhee lived up to the hype and then some as a first-year JUCO DE in Starkville, emerging as the Bulldogs’ most dangerous defensive player; Cunningham paired with Dunlap to give Florida the most threatening pair of ends in the SEC and quite likely the nation; and for this blogger’s money, no player of Dareus’s size in the league rushed the passer or penetrated the backfield with more consistency than ‘Bama’s super sophomore.

For the record: the WBE All-SEC ballot