Big day. Beaver has your run-down on today’s expected recruiting developments. The real drama is with Ken Adams and especially Roszell Gayden; the latter would give Auburn four offensive line commitments, three four-star prospects, and a hell of a foundation to start building the 2011 line around. Fingers crossed. Until there’s some movement on this front, though, we might as well talk about …

That Heisman thing. So Ingram won it. You know I don’t think he was particularly deserving, and like every Auburn fan I’d have preferred the Tide have stayed Heismanless just for the sake of pure, unadulterated pettiness. But I’m nowhere near as bothered that Ingram won as that Suh didn’t … and in fact somehow managed to finish fourth immediately behind the same player who he straight-up mauled in classic Discovery Channel predator-prey fashion in the Big 12 title game. Heisman voters are seriously teh stoopidz, but not for picking Ingram over Gerhart; if you’re dead-set on voting for a skill-position player because Suh’s stat don’t impress you that much–nevermind that he outproduced the entire Tide defensive line and was about as productive as Texas’s and Florida’s–Ingram’s as good a choice as any. Gerhart had the more impressive season (26 TDs?), but Ingram’s probably the better back. You could flip a coin, and the final margin indicated that’s more-or-less what the Heisman voters did.

Actually, flipping a coin would have been preferable in some cases. Via TNIAAM, take the Syracuse Post-Standard’s Bud Poliquin, who despite being a Heisman voter has some pretty shrewd insight into the problems with the system:

I ask how valid can so many of those votes cast by so many of the voters possibly be? How often do you believe college football beat writers actually sat down and watched, oh, Toby Gerhart run or Ndamukong Suh tackle or Colt McCoy throw or Mark Ingram prance or Tim Tebow scramble?

And I mean “live,” and not on some show featuring taped highlights and all those babbling Corsos?

Do you get my drift here? The Heisman Trophy is pretty much a wonderful thing, but the body of deciders includes too many who are swayed by the packaging and even by the pre-packaging . . . who bow to the hype machines . . . who never seem to consider that the “most outstanding college football player” in all the land might play for a mediocre club whose overall talent load won’t allow that athlete to fully flower.

I hear ya, man. Glad to see someone who has a say in this thing admit they’re not going to follow along with the media sheep-train, that they’re thinking outside the box, that they’re throwing away the “pre-packaging.” So who’d you vote for, Bud?

Anyway, for the record, my 1-2-3 official ballot read like this: Tebow-Ingram-McCoy. 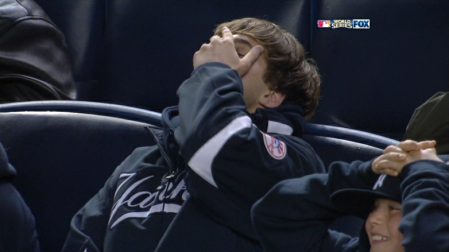 Even bloggers couldn’t get their act together; they went with Gerhart by the slimmest of margins.

There’s some good news here if you are of the a) Tide-hating b) jinx-trusting persuasions; teams featuring Heisman winners really have sucked the proverbial hind teat in their bowl games, particularly in title games, where they’ve gone a chilling 1-6 against the spread.

So it’s really too bad Texas is so horrible that even this kind of jinx won’t matter.

(As an aside, in answering the currently popular Auburnland question “Are you going to be rooting for Alabama in the title game?”, I think I’m going to end up answering yes. Sometimes these things change when the game actually starts, but the blatant injustice of Texas getting the no-questions-asked nod over TCU is so great that I’m hoping the ‘Horns get annihilated–preferably with TCU drilling Boise at the same time, for maximum “whoa, maybe the BCS screwed this up after all” outrage. Even with all the insufferability an Alabama win would create, I want a four-team playoff badly enough that I’d deal.)

Reminder. You’ve got until Saturday to join the TWER Bowl Pick-a-palooza at Yahoo!; sign-up instructions still available here. Winner gets a two-day supply of pride.

BlAUgosphere. PPL’s Kevin has taken to Sir Charles’s “they still shoulda hired Gill” comments with a little less understanding than I did:

[M]y issue is with Barkley. For bringing up this dead-horse issue again and for being hypocritical. This quote in particular stands out:

“Let’s not kid ourselves. As far as name recognition, Auburn is at a decided disadvantage. Not just in the state. In the SEC.”

You know who could change that perception? How about you Charles Barkley? You’ve got a national television audience every night on TNT. You never refrain from giving an opinion (good or bad) or ANY subject. I’m sure there are contributions Barkley may have given behind the scenes to Auburn. However, there are two sides to that coin. Outside from some face time during Auburn’s 2004 Undefeated run, you’ve been noticeably silent about Auburn football. It should stay that way. I will gladly listen to Barkley when it comes to hiring a Basketball coach. However, when it comes to football? Never. Does North Carolina care what Michael Jordan think about Butch Davis? Nope.

Elsewhere, it’s not Auburn-related, but any of you music/movie geeks out there will enjoy JRS’s best-of-the-decade albums and films lists.

Etc. Brian Cook’s year-end wrap-up of his This Week in Schadenfreude column is a must-read … presenting the Morgan Freeman Chain of Command … Chris Low at least gives Darn Bates his props.

You’ve probably figured this out, but the chart is via the Auburner.