Snubbed again. So not long after the AP showed Darvin Adams the back of its hand with its All-SEC selections, the SEC coaches went public with their All-SEC teams … and once again, the only receiver to finish in the SEC’s top 5 in receptions, receiving yards, yards-per-reception, and touchdowns was nowhere to be seen.

Which makes me think Adams must have somehow seen this coming and that fury is what he unleashed on Mark Barron in that “Lott Shots”-nominated hit from the Iron Bowl:

As Jeremy noted earlier this week, Adams does at least have that victory going for him … as well as the fact he’s got two more years plus the Outback Bowl to show these thick-headed voters why they were so wrong about him.

Elsewhere on the coaches’ team, Antonio Coleman earned first-team honors as expected and Lee Ziemba and Walt McFadden placed on the second team. That Ben Tate didn’t find a spot on the second team is disappointing, but at least the players that took those spots ahead of him (Dexter McCluster and Montario Hardesty) did have outstanding seasons. The same can’t be said for Adams.

Bowl stuff. Info has trickled out this week about Auburn’s Outback Bowl date with Northwestern:

— The game will be called by the same team of Dave Pasch, Bob Griese, and Chris Spielman that called Auburn’s Week 6 loss to Arkansas. Since an old Big 10 hand like Griese should have an easier time pronouncing “Northwestern” than he did “Arkansas,” we should be OK. (It could be so much worse: Fox is cruelly dragging the great-but-well-past-it Pat Summerall for another disaster at the Cotton Bowl.)

— Auburn will be designated the home team and will, presumably, be wearing navy. The best part about this: substantially less purple girly-ing up the football field*.

— Courtesy of the Outback folks, the Tigers are going to get some serious swag for their bowl-claiming efforts this year, as Andrew Gribble reports. (If any players want to share some of that Best Buy money with their humble Auburn Blogger, that would be sweet. I still need to get my hands on that new(ish) Phoenix album.)

— Auburn has been installed by Vegas as an 8-point favorite, which, I mean, I’m confident, but holy cow. Northwestern’s a good team. I don’t like that at all, to be honest with you.

Congrats. Dr. Ed Dyas was inducted into the College Football Hall of Fame this week, and while I have to wonder what the hell took so long, it’s still much, much better late than never. Dyas is the 12th Auburn player to receive the honor, having finished fourth in the 1960 Heisman balloting to wrap up an All-American career as a fullback, linebacker, and kicker.

BlAUgosphere. Honestly, I’m going to have to start some sort of fund next year to make sure Kevin and Plainsman Parking Lot is operational during next football season, because stuff like this: 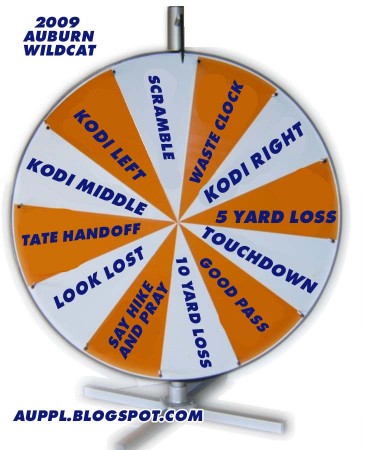 is too damn good to get it as rarely as we do. The above is part of the second part of a top-notch two-part series on what Auburn football has to do in 2010. Check it.

I can’t say I agree with every point made in this WarBlogle post regarding the differences in demeanor between Auburn’s coaches and the Tide’s coachbot–I could care less about the language our coaches use, frankly–but I did think this contrast was pretty damn shrewd:

In last year’s Iron Bowl, when the game was well in hand, CBS’s sideline reporter informed the analysts, and the nation, that Saban was on the sideline yelling at his players to continue to score, and then asked his players “Don’t you know how much I f—ing hate these guys?!!”.

Word. Also: Jay looks at Tubby’s harder-than-expected search for employment and towards the bottom of the post, Joe Auburn finds a couple of cool wallpapers for you.

Followin’ up. I argued earlier this week that TCU and Cincinnati were at least as deserving as Texas of that spot opposite the Tide in the BCS title game, and that the BCS should be as ashamed and despised this year as any year; for more in that vein, I highly recommend this pro-TCU post at TeamSpeedKills and this pro-Cincinnati post by Brian Cook at the Sporting Blog. As Brian says of the BCS: Burn it down.

And for those of you on the pro-Suh Heisman bandwagon (i.e. the Bandwagon of Sanity and Reason), I recommend this MgoBlog post and its well-deployed use of profanity and, of course, the Good Doctor’s hypothetical Heisman ballot.

Etc. I lol’d … I don’t know how many of you would be interested in reading a soccer blog during this agonizingly long  six-month run-up to the World Cup (wait, yes I do, two of you … maybe), but if you are, may I recommend the outstanding Dan Loney, who in the wake of the England draw suggests renaming tea as FREEDOM COFFEE (done!) and whose liveblog of the draw refers to France as “the Unmitigated Gaul” … Chris Low tells you things about Auburn’s season you already know, save for the fact that AU had both “a serious numbers problem and an even more serious lack of depth problem.” (?)