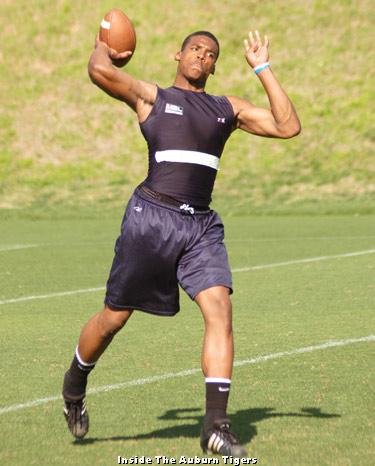 It’s official: Cam Newton has signed with Auburn. The BIG TIME athlete Curtis Luper promised didn’t quite arrive in time for Christmas, but hey, the tree’s still up. I’m not complaining.

OK, so before I hand out the party hats and kazoos, we need to mention the downside here. Yes, there’s downside, because even if you take Newton’s “I never stole anything” claims at face value, don’t expect the rest of the college football world to. He’s a kid who got arrested on charges of grand theft and obstruction-of-justice and subsequently got tossed from a Florida program that’s not exactly known for its hangin’-judge qualities. If he lands in hot water again at Auburn, all Chizik talk about character and family and doing things the Auburn way will sound like an awful lot of hot air. Chizik can always win his way back into (generally) good standing even if the Newton gamble turns sour, but that doesn’t mean he hasn’t wagered a good amount of his good guy-capital on Newton’s good behavior.

That said: this looks for all the world like a gamble you have to make. Newton was a top-ranked stud coming out of high school, he played for all the world like a top-ranked stud at Florida–he would be the Gators’ starter this coming fall if not for, you know, the whole arrest thing–and has continued to play like a top-ranked stud at national-championship-winning Blinn. At least, I think that throwing for 2,833 yards, rushing for 655, and accounting for 38 touchdowns (22 passing, 16 rushing, while throwing just 5 picks) qualifies. Disagree if you like.

And as much as I would love to see Neil Caudle finally get the chance he’s waited for for so long to be Auburn’s quarterback, the truth is that to this point he has not been a stud. Chris Todd has been better this season than I ever dreamed he’d be, but has he been as good as I would like Auburn’s quarterbacks to be? Against top-flight competition, not quite. And Caudle lost his job to Todd in nine practices last fall. (Not to mention that he couldn’t beat out Burns.) If Auburn’s coaches aren’t totally convinced Caudle can cut it, they’d be fools not to go after a recruit like Newton.  (As for Rollison and Moseley, the former got himself suspended within five months of arriving on campus and the latter was always going to need a couple years of seasoning. I don’t think there’s any legitimate complaining on their end.)

And so now Newton is on board, and as long as he can be reasonably accurate with his passing (60.7 percent completion rate at Blinn), it’s impossible to imagine a QB better suited to the Malzahn offense. A rocket arm for the copious downfield throws, 4.5 speed for the zone read and straight options, 6-6, 247-pound size for Wildcatesque red zone poundings. We’ve already seen what Malzahn’s offense can do with a quarterback who could be accurate in spurts but also habitually hung deep balls too high and short, who wasn’t remotely a threat on the zone read or the option, who couldn’t do much to make things happen when things broke down, and who didn’t even take any reps in the offense until fall practice. What on earth will it do with a quarterback who can do every one of those things and will be available in the spring?

Not to mention that Newton will have the benefit in 2010 of the country’s most experienced offensive line, the backfield firm of McCalebb, Fannin, and Dyer, LLC, and one of the league’s most productive receiving tandems returning intact with one of the league’s strongest (if not the strongest) classes at wideout. Caudle could still possibly beat him out (yes), but even if Newton’s the choice and there’s some SEC-level rust to knock off, the rest of the offense will give him plenty of slack.

I’m so glad 2010 starts tomorrow. Because I’ve never been more excited about what it holds for Auburn.