So: occasionally in the college football blogosphere someone will wittily refer to a fanbase “writing sonnets to” such-and-such superstar. Ben Tate’s having the kind of season where I feel like it’s time to make that literal, because there’s only so much stats and national rushing rankings do to explain how good he’s been. We’re at the point where poetry is needed. And while I have to admit that maybe this didn’t turn out quite as well as I’d have liked–oh, but my once-mad poetry skillz are rusty–but here it is anyway. 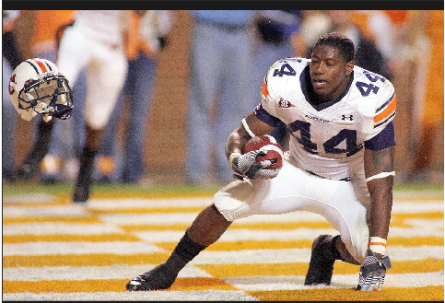 He takes the handoff running like his name.
He’s not a Percy, not a Knowshon, not
a Trindon. Watch his cleatfalls and you’ll spot
as many extra steps as extra-lame
soft second syllables are on his back.
A lowered shoulder blasts a pathway straight.
A tangle of arms: ignored. (Just like the hate.)
Each stride comes emphasized, each one attacks
the sod the way his moniker does when spit
aloud. (It’s always spit.) But even Ben
and Tate aren’t word enough for this: the men
gone sprawling, chasing air, the grass and grit
in a facemask, crowd alight, the yards burning
away to endzone, the legs churning, churning.