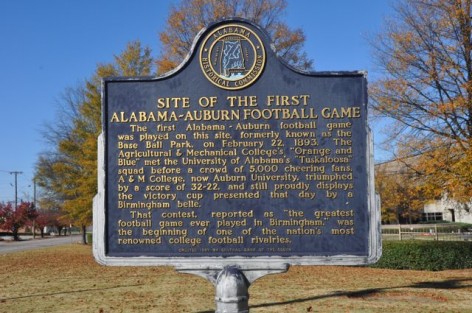 As some of you know already, I’m currently a pediatrics resident at Wake Forest.  Aside from the obvious joy of starting my final segment of training as a physician, it’s been fantastic to get down south, even as deep as North Carolina.  Having lived my entire adult life in Virginia (and Pennsylvania, if you count med school,) I missed the Sport.

Yes, the Old Dominion is technically and historically in the South*, but they just don’t know football there.  I can still remember when Auburn traveled to Scott Stadium and played the UVA Cavaliers.  We had some fantastic seats – right on the fifty – thanks to a UVA alum, so naturally we were surrounded by Wahoo fans.  My Dad struck it up with them and started talkin’ foobaw, and as the tigers started building a confident lead, my Dad started calling the game.  “Watch this,” he’d say, and then he’d predict the Auburn player’s number, the playcall, and the gain.  The Wahoos were flabbergasted.  “How did you do that?” they asked.  They didn’t come back after halftime.

That was no kind of surprise to me.  Having spent most of my elementary school in Georgia dragging my neighbors across their yards, through the fire ants and into the driveway for touchdowns, I was dumbfounded to find that “playing football” in Virginia was basically playing catch in the street with one of those lemon-sized plastic footballs with the long foam tail and the whistles.  It was tough.  My dad had me throwing a leather, college-size ball as soon as my hands were almost big enough, but he was pretty much the only one who’d throw with me in VA.  Pennsylvania wasn’t all that much better.  Sure, they have high school football on TV.  Sure, western PA is the birthplace of many a strong player.  But college football is still a peripheral, tangential, JoePa-still-coaching?-yep-sure-is affair.  My six-four, two-hundred-twenty-pound central-PA-bred best man’s favorite sports were swimming, volleyball, and racing wrestlers up ropes.  It was downright criminal that he’d never even tried to be a tight end.

And then, during med school, I did a rotation at Wake – a roundball school, mind you – where on my first day in September, a sixty-something lady pastor spied at the Penn State pin on my white jacket and said matter-of-fact, “Oh, Penn State.  Y’all won your game, didn’t you?”  It was my turn to be stunned.  I didn’t even know.  I was wearing the colors of a school I attended, but about whose team I honestly didn’t care.  And an old lady in the elevator called me right to the carpet.  Maybe I liked it.  It was high time to meet with responsibilities that had long languished in the cool blue north of Virginia.  As such, everything I own is emblazoned with huge, glossy Auburn stickers.  I now leave absolutely no room for misunderstanding:  War Damn Eagle.

Now, being that this is the first year of residency, I’ve been pretty swamped, and about a month ago things caught up to me with a vengeance.  I’ve literally not been able to see an entire game since the gut-punch in Fayetteville, and that game itself was pure luck (or, the lack thereof.)  That’s my way of saying:  sorry there hasn’t been much output since then.

But let me also say that a birthright catches up to you before long, and last week, it looked me right in the eye.  At present, I am working my month in the newborn nursery and as part of my duties, I visit the moms whose babies I’ve seen and examined.  Usually, I’ll just tell them their baby looks healthy and normal and if they’re about to go home, I give them some brief essential instructions on caring for the child.  Often, there’s family in the room, as there was last week when I stepped into the room of a certain baby.  I knew the parents already, having spoken to them the day before, but today there was an elderly couple with them.  Before I could even introduce myself, Grandpa grins and says “Oh boy, we might have a problem here.”  Having talked smack even with my fellow residents thanks to the enormous Auburn logo on my clipboard, I think instantly Georgia fans?  Florida fans? “Am I gonna have to turn around and walk out of this room?” I joke with him.

And then my brain turns the extra, critical gear.  Oh no, right before he confirmed my suspicions.  “Actually, we’re all Alabama fans here.”  Sure enough, there’s a circa-1993 desert-camo satchel with ROLL TIDE in crimson, rampant on the front.  I smile and say “Well, War Eagle anyway,” and launch into my discharge instructions.

To my credit, I smiled and retained the utmost professionalism, giving them the exact same spiel I give all the parents and answering their questions exactly the same.  But things had changed in that room.  Mom and Dad weren’t giving me the same reassured-yet-slightly-bored looks that most experienced parents exhibit.  There was a subtle concern in their eyes.  Not for whatever expertise I provided – to their credit, they didn’t blow me off – but for me.  One of “those people.”  And Grampa, honestly, was the only person other than me who could laugh about it.  Grandma?  Silent as a stone, with even less of an expression.  Dad didn’t speak another word, either.  I performed my duties, and exited the room.

In a sense I’m glad I met up with them.  The frost that descended on the room, the looks that told me “We’ll listen to you only as far as your MD reaches,” the child who did not know the fires over which he would soon be suspended… these were bona-fide Bama fans, the likes of which I’ve not seen in a long time.  Sweep aside all the Phyllises from Mulga, all the “Got 17?” yahoos, all the hangers-on and remoras and tiny-starburst-ed Sandra Bullocks, and these are they who remain.  The family with which we contest, who keep their hatchet proudly on the mantle, shined and sharpened.  It’s good to get back, down to the land where I can at least look ‘em in the eye, once again tasting that fearful symetry.

Because as Jerry rightly points out, college football is so much more than the minor league for the NFL.  The NFL is essentially Valhalla, a warrior’s afterlife to which those slain with valor are taken, a grand hall where each day the warriors feast on a nightly-resurrected beast, then throng into battle, are slain and resurrected.  Could the ancient Anglo-Saxons have envisioned the parity-driven state of professional football more perfectly?  Like James Dickey’s heaven of animals, they fall or fell, they slay or are slain, and they rise again purely because they do, harmoniously bloodying claws or going gently into an eternity of good nights.

College football is the true life, the period of earning and blood-giving and tale-writing before the long after of the NFL.  And thus it’s all the more meaningful.  Perhaps Valhalla is the warrior’s reward, but it’s only a reward for doing what is right, what is worthy, what is just, what is arduous.  It is a reward for knowing your enemy and staring him down on the goal line, for scattering his lines and bursting through the tackle and guard like a hot lance, for taking on all the towering expectations of those thousands and thousands of fans and carrying them yard by blessed yard.

Most of all those.  The uneasy, professional truce that stared from all corners of my patient’s room pulled me back to the bole of my ancestry, to the reason why this game ought to have a reward at all.  This is Auburn.  Others shy away from referring to their college favorite’s team as “we,” and for most teams that’s correct, even on rivalry weekend.  A rivalry is meant for the teams themselves, a rivalry is a competition between two closely matched equals who ever vie with each other for supremacy.  But that supremacy is its own reward.

my rage, my fury would drive me now to hack your flesh away and eat you raw — such agonies you have caused me

Again, how deeply saw the ancient sagas into the heart, the terroir that drives us howling on: for as Achilles in his rage was constrained by the gods, lest he defy fate and himself destroy all of Troy in vengeance, so too were our universities constrained from playing.  It could not last.  The cup of our rich and wrathful grape runneth over, and these young men are our champions, the avatars both of Alabama’s shameless arrogance and our righteous indignation.  They will feel it – Chizik will be sure of that.  They will know the weight of history upon them, know the eyes of the Heart of Dixie upon them.  They will fight.  It is precisely just that Auburn fights Bama, and it is for this bitter justice that our young men are to be rewarded.  Perhaps they will need a giant, jewel-encrusted sword to slay the demon that awaits them, but fight they must and fight they will and should we win, we will ride around their city not for nine days… we will march around their city walls not for seven days… but for three hundred and sixty-four.

The great so-named rivalries of our sport can battle over their reward, but battle is our reward.  Spit out the lukewarm, join me in the spirit that twists the sinews of our hearts, on eagles’ wings to aspire, elk’s horned heart in our bellies.  Let it stream snarling into the heads of our Auburn tigers who, no thing left to lose, can walk out into the pale November sun, sky breaking open, a lone pine crackling with crownfire.  Look straight into the eternal blue – we will rise beyond reason and spare no earthly thing**.

Give thanks today, then dig up your damn hatchet if you ain’t had it out all year.  The season begins this Friday, 14:30, at Jordan-Hare.

By God it’s good to be back.

* My folks were down in Florida recently and decided to visit an orange grove, waaaay out in the land of the lost known as central Florida.  They said it was like stepping back in time.  The owner of the grove said hi to my Dad and asked where he was from, to which he replied Richmond, Virginia.  “Oh, the nation’s capitol,” remarked the farmer, matter-of-fact.  “Oh well actually, DC is about two hours north of us,” began my father.  And then he thought Oh.  And then, Uh-oh.

** If you’ve never read James Dickey’s “For the Last Wolverine,” read it.