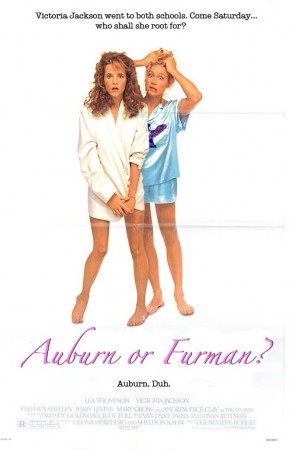 The Furman Paladins couldn’t have chosen a better time to slip onto the Auburn Tigers’ football schedule.

Sandwiched between a cathartic win over Ole Miss and next week’s grudge match against traditional rival Georgia, the Paladins lurk in easily overlooked ambush.

Furman sneaks in for Auburn’s Homecoming at 4-4 with wins over Presbyterian, Chattanooga, Western Carolina and Samford under their belts. Losses to Missouri, Appalachian State, Elon and The Citadel even out the slate.

The Paladins score a healthy 27.6 points and 151 yards rushing per game and could pose a threat to…

Oh, who are we kidding?

There is no real need to preview this game.

Auburn, on Homecoming, will turn the Paladins into an assortment of tin cans. Missouri bombed Furman 52-12 and that’s about how Saturday afternoon will turn out.

Oh, but couldn’t Furman catch Auburn napping, you ask? Sure.  The starters probably will be napping on the sidelines in the third quarter as Tiger Heisman Trophy Winner Bo Jackson once famously did.

The only kind of nap the Tigers could take that would be enough to change the outcome of this game is a magical one like the evil queen put on Sleeping Beauty. Do you know any evil queens?  Furman doesn’t either.

With little substantance to consider in regard to the outcome of the game, attention turned to the trivial.

What is a Paladin, for instance?  Is it a distant relative of the most attractive vice presidential nominee in American history?  Sadly, no.  There are no Palins in the Paladin family tree.

The Paladin were Knights of King Charlemagne’s Court. They fought in the Crusades and were featured in fairy tales from that era. So far as can be ascertained, none of them wore glasses, wore their hair in a strategically messy “up-do” or ever made any references to “hockey moms.”

Did you know that Charlemagne, King of the Franks and rival to the Byzantine Empire from 768 until his death in 814, could not write and likely could not read despite his efforts to promote learning, the arts and culture in his kindgom? He slept with wax tablets under his pillow in his later years, perhaps hoping the words written there would seep through in his sleep.

The Paladins have about as much chance of besting Auburn on Saturday afternoon as Charlemagne did learning to read by sleeping on books.

Another question: where is Furman?  An unscientific poll of the first ten golfers encountered on a course in the middle of Mississippi yielded the following guesses: Iraq, Tennessee, Wyoming, Scotland, Canada and Kentucky. Wrong on all counts.

Furman University is located in Edgefield, South Carolina where it’s been since 1826.

Steve Spurrier was surprised to learn this.

Earlier in the season, the Tigers roasted another cupcake, the Ball State Cardinals. At least the Cardinals had some outstanding alumni to profile.  There was Papa John, David Letterman and Janet from Three’s Company to name a few.

Furman? Not so much.

You’ve got Ben Browder, who’s apparently an actor on Farscape.  Has anybody ever seen that show?

What about Thomas Goldsmith, a physicist who helped pioneer color television? Thanks for that, of course, but who invented HD? That’s the question.

Of course current South Carolina governor Mark Sanford is a former Paladin, but how many “Don’t Cry for Me, Argentina” jokes can you make before it gets old?

Beth Daniel, Betsy King and Dottie Pepper are all Furman alumni. So the Paladins can turn out some quality LPGA’ers.

But in researching Furman history there was just one figure who stood out.

She didn’t stay a Paladin. After one year, Jackson transferred to Auburn.

She went on to meet Johnny Crawford, best known as the son of The Rifleman, whom she followed to California. There she embarked on an acting career.

She got her big break reciting poetry on the Johnny Carson show — while standing on her head.

Twenty Carson appearances later, she joined the cast of Saturday Night Live where she spent six seasons and was famous for impersonations of Cindy Brady and Sally Struthers.

Jackson had a moderately successful film career, most notably starring alongside Lea Thompson in the 1988 film Casual Sex?

She’s since become a conservative voice, speaking out against Democratic candidates in general and president Barack Obama, in particular, during the 2008 election.  Her outspoken nature and celebrity status led to interviews on conservative talk shows like Hannity and Colmes and The O’Reilly Factor.

The question that begs an answer, however, is how Jackson will cheer on Saturday?

Attempts to contact Jackson this week were unsuccessful so we’re left to guess to which side she’ll fall.

Will she shout “War Eagle” or “Hail the White and Purple”?

And will she do it while standing on her head?