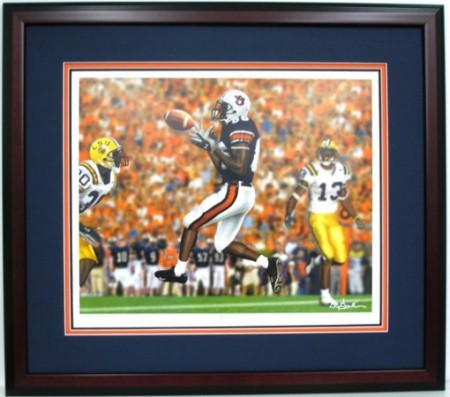 There will be a big upset this weekend in the SEC. Somebody is going down between Alabama, LSU or Florida. The conference has never had two unbeaten and untied teams ever so history says the upsets are going to come. I think that Auburn fans will be happy come midnight Saturday whether it is because of their own victory or the fall of the Tide to the Volunteers, one of them is going to happen. Of course, this is all based on what my astrologist* told me.

The Hogs are a surprising underdog here at about a touchdown. I figure the bookies think that Arkansas will have a big emotional letdown after they got screwed over against the Gators last week. Ole Mrs. had a tuneup game against UAB where the backups got at least a quarter’s worth of playing time, so the Rebs should be fresh for this one. Jevan Snead has been the biggest disappointment in the SEC this year but had a nice day last week and the light may be flickering. Arkansas’ supposedly bad defense has held the two best offenses in the league to 23 points each the last two weeks and match that with the offensive production they have been getting and you’ve got a good team. But will that loss in The Swamp affect their mentality? Is there still enough bad blood that the Hogs will be fired up to face their former coach? My mind is telling me Arkansas wins this one, but my heart is telling me Ole Miss wins it, 28-27.

“The Third Saturday in October” never seems to be played on the third Saturday in October. Jonathan Crompton’s proverbial light came on in the 4th quarter of the Auburn game. Since that time, he has been outstanding. Crompton is throwing for 482 yards and 6 TDs with only 1 INT and a 68.8 percent completion percentage while Alabama’s Greg McElroy has done the opposite in his last two games. They are like ships passing in the night and if THAT trend continues, Alabama could very well get beat Saturday. Both defenses are stout and Alabama’s running backs are similar to what Auburn had earlier this decade. As always, if the Tide gets a lead they can win easily, but if the Vols can get a score or two early then Bama is in trouble. I like the possibility of the upset here, but I think we’ll end up seeing 26-14 Bama.

If you’re not into the Bama game or it is a blowout, try one of these on the other games:

After an early derail, Clemson got back on the winning track last week when they blew out Wake Forest, but Miami is strong at home even though they had lapse last week by only beating UCF 27-7 without the backups playing much. The smart money is moving to Clemson, but I don’t buy it. Just like I wouldn’t buy a steak at Waffle Hous, which is what Clemson got when they hired Dabo Swinney. I’m taking Miami at home, 30-21.

Boston College is a bad team that somehow find themselves at 5-2. They have no passing game to speak of (1,197 yards) and their running game isn’t much better (1,087). Yet somehow they have only lost two games. That is the whacky way of the ACC, where Virginia can lose to William & Mary, Southern Miss, and TCU and then go undefeated (so far) in the conference. The Irish may be legit, friends, expect to see them in a BCS game if they can get past Stanford and Pitt at the end of the season. It is probable, even though they will be playing on the road, which almost never happens. The Irish wins, 24-17, in another heart-attack game with BC coming up short at the last minute based on pure crap luck.

Penn State @ Michigan
Line: PSU by 4 and holding
Saturday 2:30 CT on ESPN (unless we royally get screwed with the Miami game on 2 channels)

We have not heard anything from Penn State since their loss to Iowa, but they are still ranked 13th. Michigan is a solid team in Rich Rod’s second year and may put up a good fight in Ann Arbor, but Penn State will remind everyone why they were ranked so high to start the season. Nittany Lions win it, 31-26.

The Cougars’ knuckleheaded loss to FSU is the difference in them being a top 5 team. My pick to win the Mountain West this year is going to have their hands full with the Horned Frogs this weekend. TCU is where BYU thinks they should be but they are nothing alike. The Frogs play great SEC-type defense and grind you in the temple on offense, while BYU throws the ball all over the field and plays “hold on” defense. Last year, TCU embarrassed BYU and averaged 7 yards a play on first down, which will kill any team. That trend has to stop if BYU wants to keep its streak of home conference wins going (unbeaten since ’05). On offense, BYU needs to run the ball right at this defense and get rid of the ball quick to counteract the Horned Frogs’ speed on defense. Traveling from the Texas heat to a forecast 30 degrees in the mountains could help the Cougars win this one. I’ll say the home team wins, 37-32.

Get your popcorn ready because this is always a good game. I don’t care how bad Auburn’s defense has been in the last few games, they will be trying to knock people out in this game. Of course, LSU will be trying to do the same. Charles Scott may be the best back in the SEC but has not played up to his potential. This Auburn defense looks very tasty right now, but if Auburn can stop Scott, Jordan Jefferson is pure garbage at QB. LSU may have best wide receiver corps in the SEC but that is meaningless if your QB is only throwing for 169 yards a game. LSU is not equipped to get into a shootout with anybody, but Auburn’s once V12 offense is now sputtering on 4 cylinders. Ben Tate is the most underrated back in the SEC, but if QB Chris Todd doesn’t get back to form fast, Auburn is staring down the barrel of 6-6 after last weekend’s letdown to Kentucky at Jordan-Hare Stadium. The trend of high scoring affairs in Red Stick ends this year with a 14-6 win for the Tigers.