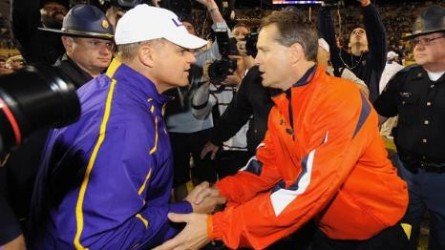 — It’s an ESPN2 prime-time broadcast, and that means  Mark Jones and Bob Davie on the call. Yes, the same Mark Jones and Bob Davie that against West Virginia produced what the WBE commenters–and writer–agreed was the worst call of an Auburn game in recent memory, and that includes the time the Mrs. WBE’s and my cat meowed at the screen for 10 minutes during last year’s Georgia game.

Speaking of cats, there’s some B-roll footage of Mike prowling his cage in the pregame, and while of course Auburn ranks second to no one-but-no one in mascot coolness, there’s also no doubting that keeping a live tiger on campus is pretty freaking sweet. I mean, it is a tiger. And we’re all partial to tigers, right? It’s not Mike’s fault he ended up being the wrong sort.

— Auburn takes over at the 26 and goes play-action on first down. Hey, that’s new! Todd has a ton of time but no one comes open and he scrambles for a couple. That’s not so new.

— Well, hot damn — Todd scrambles for five on a second consecutive play-action, Burns finds a big hole for the third-down conversion, and Tate grabs nine quick ones on first down. 2nd-and-1 just two yards shy of midfield, and I know it’s early, but the easy conversion here means Auburn will have already flipped the field at least and is driving and will have quieted the crowd and two first downs is nothing to sneeze at and maybe just maybe things are different from last week?

— They are–whereas against Kentucky Auburn failed to pick up third downs via the pass, they start here getting stuffed on 3rd-and-1 and then false-starting on 4th-and-1. Infuriating–not least because LSU jumped into the neutral zone to draw the flag on McCain. But the officials screw that up all the time and if you convert on 3rd-and-short, it’s not an issue, is it?

(Oh-by-the-way: on second down Burns throws the ball out-of-bounds looking for Fannin, and for the second time this year Davie explains that throws like that are why Burns isn’t the starting quarterback. Not that he’s wrong, necessarily, but trust me, Bob: we get it.)

— Davie says that Charles Scott “looked like he was shot out of a missile” on his first carry. I don’t think … that’s not what you … what?

As for the personal foul on Etheridge (you know the one) … I’d be happier if officials let that go more often than calling it. But 1. on replay it’s clear that even after the ball has hit the ground Etheridge takes two steps and nails the guy; whether you can expect Etheridge to see that the ball is out or not, I don’t know, but that’s going to be a flag 9 times out of 10 (in fact two different officials toss their hankies) 2. on first down McFadden wraps up Russell Shepard with the help of a quick grab of the facemask which the officials miss. In all honesty, Auburn should have already given up 15 yards and a first down (3 yards closer to the end zone, in fact) two plays later.

But also, in all honesty, the officials should drown in a pile of horse dung anyway.

— Auburn’s second possession, 3rd-and-1, Burns keeps … stopped. Excuse me while I go break something. Like my face, or something, I don’t know.

— LSU’s next drive starts with 15 more yards courtesy of Jake Ricks deciding the best way to help his team is to plant both hands in his blocker’s facemask and shove as the whistle blows. Los Otros Tigres drive to the Auburn 34 before a Bynes tackle-for-loss and incompletion force a 4th-and-6. LSU sends out the placekicker for a 50-something-yarder, and though this Jasper kid has been accurate I don’t know if his range extends to WHAT THE HELL IS GOING ON. Auburn has just been called for a “sideline infraction.” 5 yards. 4th-and-1. If LSU makes this first … holy hell, man. I don’t know what I’m going to do. Well OK, what I’m going to do is sit here and wish I could make the zebras’ hats catch fire with my mind, but still.

And … whew. Miles is usually adept at these kinds of decisions, but this time he opts for a 49-yard FG attempt over going for it–absolutely the wrong choice here–and Jasper misses by a foot or two. Bullet dodged.

— OK, so Auburn’s had two possessions of the “make quality gains on first- and second-down, fail inexplicably on third down” variety, I’m wagering this is a possession of the “negative play or penalty on first or second down to set up third-and-long followed by hopeless-looking failure of a pass play” variety.

Well, I’m almost right: Auburn doesn’t quite go backwards on their first two plays, picking up 3 on a check-down to Tate and a short Tate run, but hey, 3rd-and-7 looks every bit as hopeless as expected: a stunt finds Zimeba flailing and Todd is sacked. Fumble, LSU recovery, 1st-and-10 on the Auburn 16.

Your offensive performance by Auburn so far: three possessions, one first down, two failed 3rd-and-1 conversions, one failed 4th-and-1 conversion, one turnover inside Auburn’s red zone. WHEEEEEEEE. And hey, the defense has already given up two longish drives between all that FAIL and is trotting back out in a quick-change situation on their own 16. Odds this isn’t an LSU touchdown: slimmer than slimmerson.

— And there we are, though allowing the TD on a Jefferson scramble on 3rd-and-9 was an especially throat-punchy way of going about it. 14-0 as we go into the …

— Wonder of wonders, Todd actually hit Trott for 15 yards to salvage 2nd-and-12 just before the quarter ended. And now Todd picks up 9 on a 2nd-and-6 draw, making this Auburn’s first multiple-first-down drive of the game. Haha when’s the other shoe going to drop Chris haha ha.

DAMMIT I WAS JOKING, TODD. All day to throw, no one open, interception. Ratio of first downs to turnovers now standing at 3:2, not-so-coincidentally identical to the current odds I spend the second half putting on the dreariest emo album I can find, painting my fingernails black, and telling the Mrs. WBE I’m fasting for the next week because “what’s the point.”

— LSU’s first four plays go like this: offsides Auburn, pass for 12, pass for 19, Jefferson rush for 11. Then just to spice things up Auburn forces 3rd-and-8 before allowing a 7-yard pass (admittedly, this is against terrific coverage by Thorpe and an even-better throw-and-catch by Jefferson and Tolliver) and 4th-and-1 conversion. Just put us out of our misery, LSU.

— JINX! I was lying, Jefferson! Despite all the caustic sarcasm I still for some weird reason believe Auburn can come back in this game so in truth I’m happy you fumbled into the end zone! Nice try, but you so totally fell for that one. Aren’t you embarrassed. Yeah. In your face.

— Let’s see how long it takes for the offense to kill the buzz from the turnover. The answer: three plays, the first of which is a Tate option for 6+15-yard LSU penalty but the third of which is a failed Zachery reverse to set up 3rd-and-17. That play is a near-sack-and-fumble, of course, as the defensive end swats at the ball just as Todd lines up to throw. The offensive line (along with Tate, of course) has been the one thing that hasn’t fallen apart on offense the last couple of weeks, but the LSU d-line is eating their lunch at the moment.

— The Toro we expected to be The Toro has finally shown up tonight: on a first-down swing pass to Brandon LaFell he flies to the boundary and tackles for a gain of just 1, one of several strong plays he’s made in this half. Two plays later the secondary stiffens for what feels like the first time tonight and Jefferson’s called for intentional grounding as Coleman closes in in the pocket. What’s so absolutely Head Vs. Wall about this game is that if the offense could put a single touchdown on the board, this would still, impossibly, be just a one-possession game.

— Coleman’s down. Hooray. He’ll come back later, but this is where depth problems hurt even when your starter is out there–because he wouldn’t be out there if he had a capable backup. And next week, he’ll be even more banged-up. And so on.

— The LSU punt is horrible–27 yards–and Auburn takes over dead on midfield. Come on, guys. One score. Please.

Burns is in on first down and runs an option with McCalebb, who has the corner easily and a good block from Trott … and just sort of trots outside before walking out-of-bounds before even getting to Trott. A cut back behind Trott there picks up at least 3-4 more yards, and if McCalebb is this bothered by his ankle, I’m sorry, but he needs to sit.

— Burns rushes for 4 and–with the help of a previous LSU offsides–picks up a first down at the LSU 38. But as if just to drive home the previous point, McCalebb totally blows an outside blocking assignment that allows yet another LSU sack-and-fumble. Berry recovers, but it’s 2nd-and-19. A screen to Tate goes nowhere, 3rd-and-20. Todd has time and hits Emory Blake (!) in the hands (!!) for a first down (!!!) — dropped. Punt. Which Durst sticks out-of-bounds at the freaking 22 for a net of 26 freaking yards.

— At least Auburn’s defense has finally woken up: with the help of a first-down holding call and back-to-back tackles-for-loss by Coleman (one on a screen to Scott, one a sack) it’s an LSU three-and-out.

This is one of those games where by all accounts LSU should have delivered the knockout blow already, and by letting Auburn hang around you get the sense that just one good drive by Auburn might shift the momentum and AUUUUUUUGGGGGGHHHHHH a fumbled punt?!?! Seriously, Frenchy?! We have to start doing that again? Now?!?!? We don’t have enough to worry about with the offense performing the Tap Dance of the Rare and Elusive Two-Left-Footed Suck Stork and the defense hanging by a piece of used dental floss that can only dream of calling itself a thread? THAT’S STILL NOT ENOUGH FOR YOU? I can’t …