— First: apologies for no updates until now. Why my ISP likes collapsing on Saturdays as opposed to midweek, I don’t know.

— There’s not much to say. Disappointing–to put it as mildly as I possibly can–performance in all three phases.

— If you can’t convert 3rd-and-short, you’re never going to sustain drives, and for two weeks Auburn has seen 3rd-and-short as the best possible time to take aim at their own foot and fire.

— I didn’t think it was possible for Todd to post a yards-per-attempt figure as low as his 3.3 last week, and lo and behold he didn’t–he hit 3.4. At least he has the excuses of consistent pressure and another round of drops.

— Between turnovers and the horror of our kickoff coverage, LSU’s 2nd, 3rd, and 4th scoring drives cover a total of 82 yards … or one yard less than their first (penalty-aided) drive took all by itself.

— I’m in no way on the “Malzahn can’t hack it” bandwagon.  That party can get thrown without me. But forgive me, I just don’t feel like I’m seeing enough innovation, enough creativity, enough stuff that I haven’t seen to make me think our opponents are worried about seeing things they haven’t seen. If that makes sense. The bottom line is that his offense has scored 17 points (10 meaningful ones) in two weeks … and however little he might have to work with, that’s his unit, and those players have the skills to accomplish more than that.

Some things are too good not to share. One of them is this e-mail from reader Blake:

We live in angry, divisive times. When we’re not fighting, we’re preparing to fight or justifying our past fights or criticizing the
fights of others. We so constantly anticipate conflict that we have become dependent on it. In our business dealings, in our political process and in our personal relationships we accept this bitter rancor as the norm.

Let’s make today different. Just for a moment, let’s put aside our
petty squabbles and postpone our looming battles. Let’s forgo the preening and baiting to break the cycle of conflict. Let’s join hands and proclaim to this fallen world that we can rise above our self-centered status quo, that truth and beauty are worthy of our pursuit, and … that LSU fans smell like corndogs.

And your visual accompaniment: 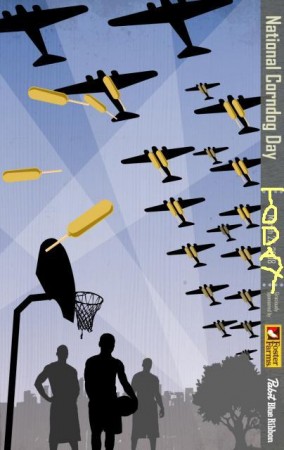 OK, now I feel ready for the LSU game.

Some links for your Gameday perusal:

— Busy couple of days here at TWER. Thor Burk is back with your essential Weekend Viewing Guide and an update on our former Tigers in the pros. Elsewhere, Kevin Strickland looks forward–kind of– to the LSU game and Auburn Elvis joins the crew here with the debut of a new feature, fAUllow Friday. And if you need yet another to swear eternal vengeance against LSU, here’s one.

— Personnel-wise, there’s nothing new out there. We know for a fact that Eltoro Freeman will play, but whether it’s in the special teams role we saw last week or at linebacker is still TBD.

— I don’t necessarily condone or encourage the vice of sports gambling … but that disclaimer aside, if you’re interested in the topic at all, a buddy of mine from Ann Arbor writes a college sports blog with a gambling emphasis named the Just Cover Blog, and it’s full of neat-o statistical tidbits. He writes about tonight’s game:

Auburn +7.5 at LSU, 7:30 …….. War Eagle has struggled in recent weeks, but they’ve covered their only time out as an underdog. I’m not so sure how much of this isn’t also a strict play against LSU. Under Les Miles, the Tigers are just 9-24-5 ATS in SEC play. They are on a 1-14 run as home favorites of a field goal or more in SEC play. I wonder how many people realize how much money has been made by betting against LSU, an alleged elite program, the last four years? That combined with a [Phil] Steele Dog in the room gives us one last primetime play.

So, yeah, Auburn might not win, but LSU would have to buck some serious trends to turn it into a two-possession win.

— Lastly, reader and former Auburn blogger Joe Blow did some research about last week’s 10-to-0 penalty ratio in Kentucky’s favor. The total number of games this season in which at eam committed zero penalties: two. Auburn-Kentucky, and Duke-N.C. State, in which the Wolfpack had none and Duke just 4. There have been only six occurences this season where a team has been flagged just once.

In other words: Kentucky caught a hell of a break, and Auburn’s due for some luck with the zebras tonight. Hopefully.

No Twitter this week, sorry, but I’ll be back just before kickoff with any last-minute news updates and again at halftime of the game. Enjoy your Saturday.