— This, first of all: the better team won. No team that scores 7 offensive points deserves to win in any way, shape, or form.

— Giving up 14 fourth-quarter points is tough, but when your offense spends so little time on the field in the first half, and your defense doesn’t have a second string to fall back on, that’s just what happens. Malzahn and the offensive staff had better be the ones getting the criticism from Auburn fans this week.

— Look, you can’t win throwing for 3.8 yards a pass. You just can’t. Until further notice Auburn is … well, a lesser version of Kentucky: a team that can run the ball OK, but can’t throw to save its life. Except that Kentucky runs it a little better, apparently.

— So much for the idea of Auburn as a second half team, huh? Fewer punts, I guess, but penalties in torrents, five possessions with no points, and the world’s worst-timed case of the dropsies. Bleah.

— I don’t understand our crowd. Huge swaths of empty seats in the lower bowl with Auburn tied in the fourth quarter against an SEC team. I know it’s cold. But it’s not raining, it’s not a blowout, it’s not some cupcake, those tickets are already paid for, and people for whatever reason aren’t there. It hurts.

— Obviously this is a tough, tough loss to take. But the season’s not over. Save a particular game at the end of the schedule, no one on Auburn’s schedule has been so impressive we can’t at least conceive of Auburn winning … and as 2008-like as this performance was, we still have a long way to go to hit those depths. It’ll take more than a year to make everything right again after that kind of disaster, and as much as we wanted to believe otherwise after those first five weeks, we’re just going to have to grit our teeth on nights like these and wait.

— Well, here’s the good news: Auburn’s been a second-half team and they’re ahead at the half. Can’t complain too much when that’s the case.

— So … anyone still think the defense needs more work than the offense? It helps that Kentucky is every bit as bad throwing the ball as we expected them to be, but still, holding any offense with that kind of line and those kinds of skill players to 7 points–after three straight three-and-outs–is a hell of a performance. Full kudos to Roof and the defense.

— Probably time to give Jay Boulware (or maybe Tracy Rocker?) some credit: one way or another, he’s figured out how to get our tackles through the middle of the line on placekicks. Auburn’s swatted two extra points this year and has now gotten 7 critical points out of a field goal block. Once is a fluke; this many times means something’s going right.

— The passing game is broken. Todd is 5-of-11 for … wait for it … 18 yards. And most of those came on Zachery’s broken tackles. Malzahn and Todd and the wideouts have to go back to the drawing board this week, because Auburn can’t survive going forward–and hell, may not survive this half–being as unbalanced on offense as they’ve been these  past two weeks.

— We’ve all been led to assume Auburn will after the half. But if they don’t, Kentucky’s going to win this game, because the defense is just too thin to hang on if the offense isn’t moving. We’ll see what happens. 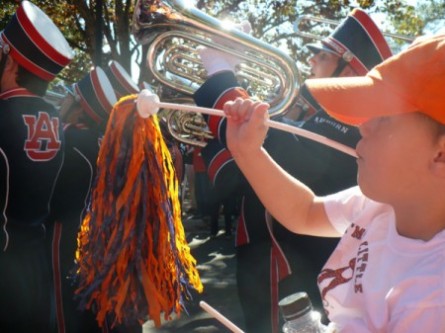 Click that for some other sweet submissions to this week’s photo contest, but if you’ve got time, there’s even more to poke around at here at TWER this morning: John Magruder looks back at the Arkansas game and updates his Spread Sheets with topography (!), Kevin Strickland previews tonight’s contest against the ‘Cats, and Thor Burk continues the Sunday sagas of Tigers in the NFL and beyond. Consume!

Update: I don’t remember the quote verbatim, but I’m in mind of the radio voices from Bill Murray’s alarm clock in Groundhog Day: “Hope you have your jammies on cause it’s cooooooooooold out there!”

Or at least that’s what the reports from Auburn are: it’s cold, it’s windy, there’s been some sleet. Yikes. I think this plays into Kentucky’s hands a little bit–they’re not going to want to throw the ball much anyway–but it should affect both teams.

Personnel reports from the above links:

— Walt McFadden is on the field, stretching, and looks capable of playing.

— Eltoro Freeman is back, and he’s getting the start at WLB. Did the time off help?

— In a bit of a surprise, Antoine “Hot” Carter will get the start over Michael Goggans. Carter looked good in his limited action last week; here’s hoping he keeps it up.

— Anthony Gulley is back from his concussion, but I can’t imagine he’s goign to see too much playing time.

See you at halftime.

Some other links for your pregame enjoyment and edification:

— Big recruiting weekend as a whole host of big-name visitors will be on the Plains (as an offensive lineman, Ed Christian might be the biggest of them) and Chizik knows Auburn’s got a lot of slots to fill between now and Signing Day.

— Phillip Lolley’s not that worried about Neiko Thorpe.

— Andy Bitter breaks down the game, and if you want even more from your humble Auburn Blogger, my answers to Tru’s questions are up at A Sea of Blue.

— Lastly, last night was a busy one for Auburn athletics: the Auburn men’s hoops teams got their practice on for the first time, and a star-studded Home Run Derby raised a buncha money for Lee County’s Boys and Girls Clubs. Make double-sure you check out the AUfficial site’s gallery of shots from the Derby.

I’ll be Tweeting all afternoon long as we follow the Red River shootout, Florida-Arkansas, etc. Whether you’ve signed on with Twitter or not, you can follow along here.

This post will be updated with any kind of late-breaking news if it, uh, breaks. Otherwise I’ll be back with some quickie halftime analysis as Kentucky and Auburn head to the locker rooms.