— Man, what a terrible, horrible, no good, very bad day* for Auburn. Just enough spunk there in that third quarter to make you think about miracles and whatnot, only for the offense and special teams to revert back to the same carnival of mistakes we saw in the first half.

— Major, major work to be done in the passing game. Todd was awful, the line couldn’t protect him, receivers couldn’t get themselves open downfield … and all against a team that to this point of the season has been one of the worst in the country in defending the pass. Right now it’s a pretty severe outlier for both teams, so I wouldn’t expect a repeat performance for Todd and Co. next week … but this is now two straight weeks Todd hasn’t been able to get his wideouts involved. It’s worrying.

— I do think, though, that’s really the only “alarm bell” to sound here–the running game got its licks in, the defense did about the best it could given what it faced in terms of field position/offensive collapse and the talent and coaching on the opposite sideline, and if you assume Fannin’s not going to be victimized by as pefect a strip as you’ll ever see a second time, Auburn was fine in punting, placekicking, and their own return game.

— Of course, kickoff coverage is still a massive, gaping wound. It’s something Arkansas’s particularly good at, but it’s also not like Auburn gets any relief in the schedule, either. Who’s excited about facing Derrick Locke and Trindon Holliday the next two weeks?

— What in the hell is up with Ben Tate in the red zone? If I’m not mistaken, he’s fumbled three times this season– and all three have come inside the opponent’s 10-yard line. Does Auburn have a sports shrink he can see? Becuase that seems awfully mental to me.

— I might not say something like this if the Alabama bloggers hadn’t already said it, but … Arkansas’s kind of a buncha punks, man. The uncalled leg whip in the first half. The chop block. Their defender grinding his helmet so firmly into Tate’s facemask his freaking helmet comes off. (How A.J. Green celebrating a potential game-winning touchdown is unsportsmanlike and that little maneuver isn’t is beyond me.) [UPDATE: That particular complaint is redacted. On second viewing the Arkansas defender’s helmet just stuck in the Auburn player’s facemask. There was no grinding. Apologies.] There’s no place in the game for any of that stuff.

— Auburn is still 5-1 and their one loss has come on the road to an explosive, well-coached upper-echelon SEC team. And although I don’t think anyone would dare argue that the Hogs weren’t the better team by a mile today, the game could still have been very different without a whole cavalcade of Auburn mistakes we just hadn’t seen from them the season’s first five weeks. Assuming SuperTodd comes back to us, the Tigers might not be the SEC contendahs we let ourselves hope they were for this past week, but they’re OK. They’ll be OK.

Enjoy the afternoon and evening games, War Eagle, and I’ll see you tomorrow.

— Oh there’s that other shoe. I was wondering when it was going to drop.

— Looks like there’s at least one thing still left over the Tubby regime: the ability to completely implode in early kickoffs vs. Arkansas.

— I’m not going to say a single bad word about our defense. We’ve known all year that the dam would break if the offense ever had the kind of half it just had … and not only did the offense have that kind of half, the special teams shortchanged them twice on top of it. Maybe against a Tennessee or a La. Tech we could get away with that. Not against a Bobby Petrino team on the road. As soon as Fannin fumbled, the game was over.

— As for the offense, it’s been a lethal combination of two things:

1. Todd has been disastrous.

2. First downs have been disastrous.

The result is that Auburn’s facing 2nd- and 3rd- and long and being forced to put the ball in the hands of a quarterback who’s having a 2008 kind of day at the helm. Put those two things together, and voila: 108 total yards at the break.

— Some credit is in order to the Hog secondary. Auburn’s helped out, of course (you can’t help but wonder how different this game would have been if Todd hits Zachery for that easy 6), but there have also been times Todd has dropped back, had time, and just had no one open. That wasn’t happening against Georgia or the Tide.

— I can’t think of an Auburn fan who before the season, presented with the option of being 5-1 after six games with the only loss to Arkansas in Fayetteville, wouldn’t have grabbed that with both hands. Yeah, it would have been nice not to be run off the field, but it’s not like we haven’t seen Auburn run off the field by the Hogs before and still go on to have a pretty damn good year.

— Goals for the second half: don’t get anyone else hurt, get Todd back in his previous groove as best we can, play hard to the final buzzer.

Courtesy of friend-of-the-blog Rod, a kind of second in a series: 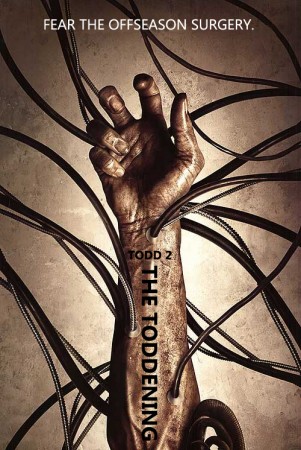 A lot us expected Todd 2: the Toddening to be some kind of horror film, and it has been … for Auburn’s opponents. Here’s to hoping Hog fans are watching through their fingers by the time things are done today.

— According to the Bitter Twitter, Byron Isom is with the team and on the field for warmups. I suspect he’s done what he has to do to be back in an Auburn uniform.

Having any linebacker–much less one that we all know has plenty of raw talent and energy–that can walk and chew gum at the same time absent is Not Good. News as bad as Isom’s return is good.

— Not much in the way of exciting previewin’ links to bring you this a.m., but did you know Tommy Thigpen has Arkansas roots? Also recommended: Dr. Jolley’s insistence here at TWER that the running game holds to the key to victory, and Kevin Strickland’s preview, featuring this absolute beaut of a line on Auburn’s defense:

Nobody’s saying the Auburn defense is akin to the 17th Annual Crimson Tide “As Good as 1992″ defense. It’s probably not in the same neighborhood at this point.

— See you at halftime for some analysis as instant as your coffee and oatmeal.