*** I’m having my breakfast with The Hag this morning (1981 concert at the Opry. Sign up at that site for some great concerts. You won’t regret it.) “Silver wingsssssss/slowly fading out of sight.” I love me some Merle Haggard. I’m in a good place for this game against LSU. War Eagle!

Someone needs to explore that one year of Victoria Jackson’s time at Auburn. What did she do here? Was she in the theater department? I need to comb through the Gloms.

Her’s an excerpt from her bio on that site:

Cheerleader.. homecoming queen.. attended Florida Bible College; received a gymnastic scholarship to Furman University, attended Auburn University one year, and ended up in Hollywood, CA via summer stock in Alabama, where she met Johnny Crawford (The Rifleman) who promptly put her in his night club act and sent her a one-way ticket to the show-biz capital.

*** That spring in your step last night? You guessed it – Auburn beat Bama in volleyball, beat them for only the second time since 1999. It’s like Bo went over the top or something. 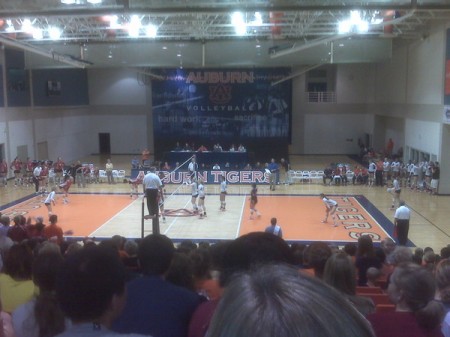