Picking up where we left off … 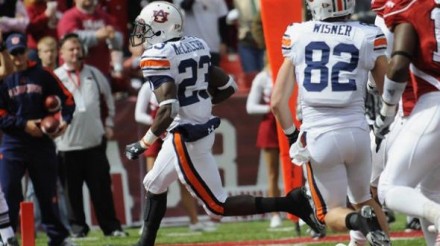 — Honestly, shouldn’t there be a rule that if one team is down 27-3 at halftime, that team should get the opening kickoff of the second half regardless of who got the ball first to start the game? Of course there should be, because forcing Auburn to kick off here already down 24 just seems cruel to this Auburn fan who’s sure all the Auburn fans would agree with this sweeping rules change right now.

— Fortunately, Auburn’s defense doesn’t feel as sorry for itself and I feel for them, and with a little first-down help from Mallett (who baldy misses a wide-open receiver) the Tigers force a three-and-out. Not bad. They say the longest journey begins with a single step, and maybe this is that step. (Of course, coming back from 24 down would be a Journey so Incredible we’d need to make two dogs and a drowned cat Auburn’s new mascots, but there’s no point in worrying about all that now.)

— Malzahn starts the half with the two-guard “buck sweep” for 9, and on 2nd-and-1 Todd goes play-action and finds Quindarius “Gasless Limo” Carr for 32 yards. Don’t think anyone’s going to accuse Dr. Gustav of twiddling his thumbs during halftime anytime soon.

— A second buck sweep gets Tate to the 8, and a third one should get him into end zone, but Zachery and a pulling Berry miss the same linebacker and Tate’s downed at the 3. (As you can see.) No worries, mates, Auburn’s got it rolling now and with three downs to punch it in, you can safely bet that AAAAAAUUUUUUUUGGGGGHHH TATE WHAT AAAAAAHHHHHH.

This game is stupid. Stupid game. At least Arkansas has to drive 95 yards for a touchdown.

— Arkansas drives 95 yards for a touchdown. 34-3. Somewhere Dave Archer blames it on the “sudden change situation,” and it’s time to head for the mental and/or emotional exits.

— Well … maybe I’ll just stand here in the mental and/or emotional breezeway for a minute, since Auburn’s got things going again: McCalebb for 6, pass interference flag on the Hogs (about time you made that up to us, jerkfaces), Tate for 6, Tate for 28, Todd to Trott for 9, Tate for 4, Tate for 3 to the 1 please don’t fumble Tate for TOUCHDOWN. 34-10. That’s two successful drives in two attempts this half, so it’s good to see that even today the offense isn’t totally dysfunctional–let’s just not wait until we’re down 31 points next time, eh, gents?

— An Abuurn blitz gets through to ruin the Hogs’ third down–it’s 3-and-out–and now Frenchy even makes a little somethin’-somethin’ happen on the punt return. Maybe I’ll just wander back to my mental and/or emotional seat for a minute.

(By the way: aside from Trott getting his usual great block on the edge, this play isn’t even particularly well-blocked–Berry whiffs on a linebacker he’s supposed to erase and just falls down, but as he falls down he forces a closing safety to hurdle him, and so the safety’s just off-balance enough that he can’t tackle when Tate somehow beats the linebacker to the corner. About time Auburn started getting those kinds of breaks this game.)

— Griese says the TD was scored on “the same play they ran three times last drive.” First: that was two drives ago. Second: no, this isn’t, this play had one pulling guard and the other had two. Maybe Griese also thinks spiders are insects?

— Eh, it’s the usual from the Arkansas offense: deep pass that Thorpe’s in perfect position to break up and doesn’t, 11-yard run for Smith, it’s 2nd-and-5 on the Auburn 33 … when Ricks bulls his way into the backfield for a loss of 2, Stevens somehow escaps a double-team and holds a screen to Williams to 2, and when Arkansas goes for it on fourth down, Blanc shucks aside a blocker and stuffs a draw! Auburn ball, and a touchdown here makes things  … well, maybe not very interesting, but interesting. Like, if the game was Discovery Channel, we’re watching the ant documentary now, we’re a score away from lionesses tracking gazelles, and if Auburn trims it to a one-possession lead, it’s Planet Earth time, baby.

— Burns and Smith combine to give McCalebb a huge hole over the right side and it’s a TOUCHDOWN! 34-23. 20 straight points, two-possession game. Of course, this is the problem–Auburn’s scored 20 straight points, and they’re still two possessions behind. The 14-point swing on the Tate fumble left them two mountains to climb: one just to get back in it, another to actually take the lead. One down, one to go.

— As dangerous as Arkansas’s return game is, as exhausted as our defense is, as many points as Auburn needs, maybe Chizik will think about an onsides kick? Nope, boom goes the kickoff, but at least Hull’s on his game today–it was a touchback last time and this one lands at the goal line.

And Dennis Johnson breaks a whole series of tackles before Hull ushers him out of bounds after a 70-freaking-yard return to end the third quarter. Thanks for stopping by, Momentum. Stay longer next time, would you?

— A touchdown here and it’s a three-score game again–even the ’90s Buffalo Bills would have a tough time making up that kind of deficit in that short an amount of time. So a stop, yes, would be awful nice, especially after 1st-and-goal on the 21 following a Hog chop block.

Less nice is an easy throw to Williams–Bynes lost him in coverage–that makes it 2nd-and-goal on the 3, and even less nice than that is the backup tailback waltzing in for a touchdown. 44-23, and the second mountain now looks positively Everestian.

— McCain and Smith conspire to let a blocker through unmolested on a first-down McCalebb draw; loss of 6. But Todd finds Trott for a few on second and Adams for a big catch on third that sets up 4th-and-inches. Auburn makes this, or that’s the game.

Todd … fumbles the snap. Of course he does. It’s like this game is being written out by some overly earnest creative writer, who wanted it to end on a note that forcefully drove home his point about how clumsy and mistake-prone Auburn has been today. Well, Auburn-Arkansas Game Creative Writer, I’m here to tell you that having Todd fumble the snap is way, way over-the-top. You’ll need to come up with something a lot more subtle next time, because that’s just too on-the-nose by half.

— Antoine Carter’s first sack of the year forces an Arkansas punt, but it barely matters–Auburn’s at the point where they’ll have to recover two consecutive onsides kicks and score three consecutive times to win the game, and though verily I have seen many amazing and frightful things in my many years of watching college football, I have never seen something so amazing as frightful as that.

(Starting at the 1 after the stupid Arkansas punter punted a stupid punt that stupidly died inside the 5 doesn’t help.)

— Todd gets Auburn out of the hole, but a sack and fumble ends the part of the game that’s even remotely interesting. To go back to the Discovery Channel metaphor, you’re now watching a metereology expert gesture towards radar readings on his computer to explain the weather patterns of Southwest Mongolia.

— The game ends 44-23. Auburn’s 5-1, and that’s not so bad, though getting a little more encouragement that Auburn would end up 6-1 rather than 5-2 in the process of arriving at 5-1 would have been appreciated.