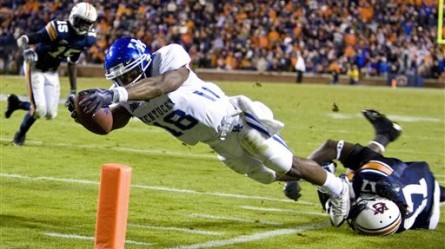 I haven’t read much of the media response–be it “mainstream” or “new”–to Auburn’s loss to Kentucky last night. It was one of those losses that makes you not want to think about college football for a while, so instead of following through on my plan to watch Ron Franklin call Oklahoma St. and Mizzou into the later hours, I sat through an episode of House on DVR, read a book for a while, and went to bed early. This morning I turned on a Premier League match in the background, poured myself a cup of coffee and then a second, and read some more. The wound, I’m afraid, is still tender.

So I can’t say I know that Auburn’s offensive displays through the first five weeks are being labeled as “a mirage.” But I would wager they are, because “a mirage” is usually the first term that comes to the sports media mind when a team’s perceived expectations, abilities, coaching wizardry, etc. disappear in the space of 60 minutes of football like so many cartoon oases.

But those first five weeks, I’m here to tell you, were not a mirage. A mirage is a thing seen that isn’t actually there, and the Auburn offense we all saw in those first five weeks was there. 459 yards and 5.5 yards a play gained in Knoxville, the strongest offensive showing made against the Vols yet this year. 400 yards and 34 offensive points against West Virginia, their roughest defensive outing of the season. Mississippi State has faced two of the country’s best-coached and most efficient offenses in Georgia Tech and Houston; Auburn’s offense performed every bit as well against the Bulldogs as either of those. It’s just not accurate, to say Auburn’s offense wasn’t any good all along, that we were seeing things that weren’t there. They were there all right.

They just aren’t there any more. Auburn’s offense was good. Now it’s not. Now it is bad, 7 points at home against Kentucky bad. It’s not that we’ve now seen the “real” Auburn offense; it’s that over the past two weeks we’ve seen the Auburn offense transform into something else, like Cinderella’s clock striking midnight and all the fabulous white horses turning back into the mice they always were.

Chris Todd is Chris Todd again. Darvin Adams and Terrell Zachery are the guys with two career catches between them they were when the season began. Andrew McCain is once more the fifth-year senior who’s never seen any meaninfgul playing time. Gus Malzahn arrived and like the college football fairy godmother he is, he waved his magic wand and turned the rotting pumpkin of an offense Tony Franklin and the Tuberville staff left behind into something magical. But in the end, even he hasn’t been able to keep it from changing back, hasn’t been able to alter its essential pumpkinhood.

So where does Auburn go from here? I don’t know. Malzahn may have a little magic left, and he won’t be under the illusion that his quarterback will be the fully functioning QB that led the way to 5-0; whether it’s because his arm is wilting again or his head has loosened a bit the way quarterbacks’ heads do sometimes or (most likely) some horrible, inextricable combination of both, Todd is not that same Todd. (More on this in a second.) But there is pride in that offensive line, power in Ben Tate, speed in Onterio McCalebb, determination in Zachery and still, I believe, potential in Mario Fannin. There are blocks here for Malzahn to build around, whether his fairy dust is working or not. And most of Auburn’s remaining opponents, while probably stronger than Kentucky, are not dramatically stronger. Hope is far, far from lost.

But if last night’s game put me in mind of  Cinderella, and the Disney version you’re all thinking of that gave us the iconic mice and the pumpkin and the godmother, it also reminded me of the original Grimm Brothers’ version of the story, which is something very different. There are birds that peck out people’s eyes. Cinderella isn’t just forced to do the chores, she’s set pointless tasks by her step-relatives just for the cruelty of it. The stepsisters cut off parts of their feet to fit the slipper and are given away by the blood that oozes from the shoe and soaks their stockings.

So in short: yes, Auburn fans, we’re going to have our happy ending some day*. There’s no reason to doubt that yet. But first, first come the long nights like last night, where there’s just nothing to do but sigh, applaud our team’s effort and sacrifice, turn off the TV, lie down, and dream of the better days to come.

— Man, what on earth do we do with Chris Todd? His yards-per-attempt mark in his last four games against real (i.e. non-Ball St.) competition look like this: 9.1, 6.7, 4.6, 3.8. Your QB-observin’ mileage may vary, but I’d say those numbers track exactly the subjective appraisal of how well he’s been playing: great vs. WVU, good-but-not-outstanding vs. Tennessee, poor vs. Arkansas, and then rock-bottom against Kentucky.

I’m of the opinion that however much he says otherwise, his arm is bothering him. The throw to Fannin last night–where he had time to set himself, plant, and throw to a wide-open receiver, only to leave it a full five yards short–looked to me for all the world like the throw of a quarterback whose arm just isn’t all there. And if his arm’s not there, it’s a good bet his head is worried about his arm’s not there, and thus isn’t all there either.

I love how much effort Todd has put into this program and the dedication he’s shown, I love that he’s given us the gifts of the West Virginia win and the bombs to Zachery and those great escapes against Tennessee, I love how he handled himself through the coaching upheaval and become the sort of player I’m glad to have at Auburn. But this offense–and by extension, Auburn–can’t succeed with him playing the way he’s played the last two weeks. It’s still too early to think about replacing him, but do I think we have to have that conversation if Todd fails to look any better against LSU this week? Yes, I’m afraid I do.

— I’ll have to rewatch to make sure, but I’m also fairly certain that’s been the worst outing for Auburn from a hands perspective. Adams missed more than one ball that he’s made a habit of bringing in this season.

— If a lot of us have been willing to give Gus Malzahn more credit for Auburn’s wins than an offensive coordinator would usually get, he also has to take more of the blame for last night’s non-showing than we’d give Chizik. The inability to get the passing game going, the lack of a sustained drive, and especially the killer pre-snap sloppiness–if Chizik’s not going to micromanage the offense, then those things are all on Malzahn, and it’s particularly disappointing coming off of a loss in which they were all already an issue. I felt like Chizik got the team’s overall focus and energy back where it should have been, and Roof’s unit showed some definite improvement. Malzahn didn’t rise to the challenge, and while we all know he doesn’t have a whole lot to work with when Todd and the receivers are playing the way they did, it’ll be a little worrying if the penalties and mental errors continue in Baton Rouge.

— 35.4 net yards per-punt. What’s going on here, Durst? (Oh, and 7.0 yards per kickoff return. I swear, Auburn’s special teams cannot take a step forward–in their kickoff returns, in the FG block–without taking one back, can they?)

Kodi Burns. Ran with more of a purpose than I would say I’ve seen from him yet this season–I know the 6.2 a carry average is a high–and completed his one pass.

The offensive line. I know, I know, the penalties were awful. But Auburn ran for 220 yards and averaged 4.5 an attempt without any big 60-yard bursts to distort the statistics; the longest run of the night was 19 yards. Especially with the passing game giving the ‘Cats no reason to back off, I don’t think we can ask for much more consistency than that. Zero sakcs allowed (again) is pretty cool, too.

Rush defense. Don’t care who we’re facing, 5.8 yards-per-carry is too damn much, and letting Cobb loose in the fourth quarter was backbreaker.

Drive-finishing. Auburn only had the one shot at the red zone and converted, but still, the Tigers also had drives of 30, 67, 34, 24, and 27 yards result in zero points. You can’t use the “the offense needs a first down to get going excuse” when it regularly got two or three first downs and then petered out.

And so we all end up right about where we thought we’d be to start the season: 6-6 at the minimum, hoping for an upset of LSU, Ole Miss, or Georgia to get us to 7-5. Given Auburn’s depth issues and LSU’s lack of offensive firepower, no time like the present, gents.

*Casting the Chiznick as Prince Charming is taking the metaphor a step too far, but at least he’s got the jaw for it.