Welcome to the SEC West Division

With half the season in the books, I figure that the stats should begin to show some relevance. How are things tracking so far? Take a look at the running adjusted yards per team, through game 6 (click to enlarge): Auburn and Alabama continue to lead the pack, with Alabama just a whisker ahead.  LSU, Ole Miss, and Arkansas remain clustered in the middle.  And while that loss to Houston really hurt Mississippi State, it looks like the continuation of a general slide.  Of note, not that many west division teams have played each other, outside of Alabama who’s pounded Ole Miss, Arkansas and Mississippi State, and Mississippi State, who have been pounded by Auburn, Alabama, and LSU.  Auburn, Ole Miss and LSU have three, four and three respective division games left to play, which should help sort things out.

Also interesting – see if you can tell where the Georgia game ends, where the Bama game ends, and where the Auburn game begins on the following chart of Arkansas’ season-to-date: I certainly couldn’t.  Not to imply in any way that Auburn isn’t responsible for the ugly loss… but maybe there’s something to the notion of regression to the mean.  I commented at the time that Arky played “miles” above their five-game level – in hindsight, that was a little hyperbolic.

You’re probably familiar with topographic maps, which indicate elevation changes either with contour lines, or by using a different color to represent each range of elevation.  They look something like this: 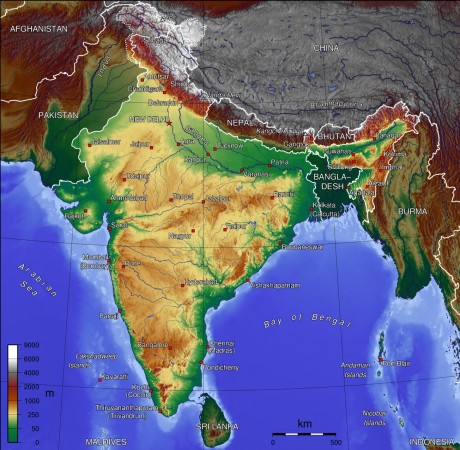 You get a pretty good sense of the three-dimensional shape of the sub-continent from a two-dimensional projection.  Pretty neat.

What’s nice about spreadsheets is that any data you have lying around can be extracted pretty simply, if you just put in the correct formula.  So, let’s say we wanted to know how our team has been performing over downs one through three, and in quarters one through four.  We could make a topographic map of the defense’s and offense’s performance, that just as we can topo-map India.  And that’s just what I did, using season-to-date data acquired in my usual methods.  Quarters on the horizontal, downs on the vertical, hot colors good and cold colors bad for both the offense and defense: This is an interesting depiction.  Our offense makes a lot of hay on first and second down in the middle portion of the game, and on second and third in the fourth quarter.  Third downs in the first half are a problem, and we’re not quite as hot on first down at the beginning and end of the game.  Seems to match up with how our team has performed so far.

The defense is significantly weirder, but patterns do emerge.  First of all, our defense bookends the game.  Auburn plays their best and worst ball in the first quarter, giving up ground on second down but playing significantly better on third.  The fourth quarter shows us that pattern again – if less drastically – with the Auburn defense playing decently on first down, not performing as well on second, and playing their best on third.  The middle half of the game basically reverses that trend, with our best overall play coming on second down.

Great.  So?
versus the wildcats

Now comes the reach:  with a half-season’s data behind us, what predictions can we make?  Maybe we can extrapolate from the available data on Kentucky and Auburn.  Keep in mind that Kentucky has already had a bye week (ouch) and for some unknown reason, ESPN decided that their first game versus Miami of Ohio wasn’t worth a play-by-play recap.  So we have data from four games, two of which are versus Alabama and Florida.  Here are the maps of how Kentucky has played so far: Kentucky’s offense is a tale of two halves, with the ‘cats playing better in the even quarters than in the odds.  That pattern is exemplified in the third and fourth quarters, with the third being a Bluegrass Nightmare and the fourth showing the ‘Cats to be bizarrely effective on third down.  I think our defense – at least, how they have played to date – matches up well against that pattern of play.  But if we get to the fourth quarter and the game is close, we could see some long drives and some very tired tigers.

In comparison, the defense looks kind of like our offense: Kentucky starts slow, has a big sweet spot on first and second in the belly of the game, and stand tall on third down in the fourth quarter.  Something’s got to give.

So how is it likely to pan out?  For each coordinate pair of down and quarter, I took one team’s offensive production and the other team’s defensive production, and computed a simple arithmetic mean.  For instance, when Auburn has the ball on second down in the third quarter, I averaged their usual production (10.3 adjusted yards) and the average yards given up by the Kentucky defense (1.5 adjusted yards.)  And then I graphed a topo map of that.  This method is a little more esoteric and also, a little more seat-of-the-pants.  But I think the theory is sound.  There’s a map for when Auburn has the ball and one for Kentucky, each map scaled identically: This looks like fun.  If each team plays as they have been playing, Auburn should come out of this one the clear victor.  If we let the ‘Cats hang around until the fourth quarter… let’s not think too hard about that.  My homerrific guess is that if the Auburn offense shows up itchin’ for a fight, we’ll be good enough that the comparisons between us and Florida and between us and Bama will be valid, at least for when we have the ball.  When Kentucky has the ball, it’s tougher to know how we’ll stack up.  Our defense is probably going to have to force turnovers, and it remains to be seen if they can get enough pressure to make that happen.

Should be a good game either way.  War Damn Eagle!