HAAAAAAAATE. Just in case we’ve got any LSU fans reading, they should know that this: 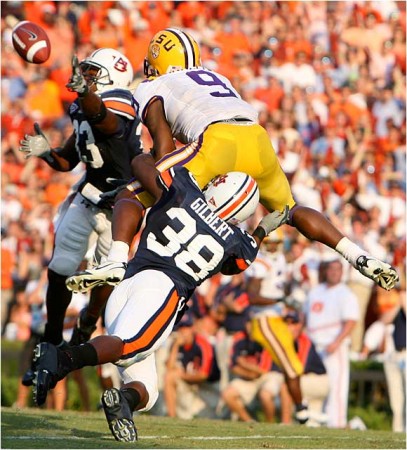 was absolutely the right call.

“There’s only one Tim Tebow in this world and I don’t really know what people want from (Pryor),” Posey said. “He’s going to get better. He really can’t do much worse” …

Posey went on to say Pryor will improve, although he was a bit unsure of when.

I offer this as a reminder, both to Auburn fans and to Chris Todd: things really could always, always, be so much worse.

Notes from the beat. Charles Goldberg offers a three-paragraph summation of why criticizing Auburn’s coaching staff for anything other than isolated breakdowns this year is kind of dumb:

The Tigers have 75 on scholarship while most every other team has 85. But even that doesn’t tell the story. Nine of the 75 are hurt and can’t play. Some others are being redshirted. Some others are special teams backups and simply don’t play.

Auburn is playing as if it is on probation, even though it is not.

And yet we’ve seen in the past week that somehow getting to 7-5–still Auburn’s most likely final record at the moment, if you ask me or even a neutral party–still won’t be enough for some Auburn fans. WE WANTED A PONY, DAMMIT.

On the injury front, we can probably stop holding out any lingering hope that we’ll see Mike McNeil this year. Burning a year of eligibility at this point–when it’s hard to see how he’d step in and immediately provide an upgrade over Bates anyway–would just seem kind of silly. Zach Clayton, you may have noticed, has been out with an ankle injury suffered in the later stages of the Ball State game–he’s “getting better” but it doesn’t sound to me like we’re going to see him this Saturday.

As usual, there’s a ton of info in yesterday’s Andy Bitter post, starting with Travante Stallworth’s and Quindarius Carr’s push towards claiming the No. 3 receiver spot. But I thought this tidbit from Trooper Taylor on DeAngelo Benton was especially interesting:

Wide receiver DeAngelo Benton, a native of Bastrop, La., has had an extra bounce in his step this week, with a game in his native Louisiana on the schedule. “I told him if he’d been practicing like this the whole time he’d probably be starting,” Taylor said. (Emphasis added–ed.) “I think he’s very level-headed and he understands that he takes every day day-by-day,” Auburn coach Gene Chizik said. “Just tries to contribute to our team. I’m sure he’ll be excited to go back to the state and play as anybody would be. I don’t think that that’s something that’s got him uptight or anything of that nature.”

Pretty straightforward why we haven’t seen more of him, isn’t it? At least Benton’s on Taylor’s radar–poor Emory Blake’s nowhere to be seen.

Elsewhere, the LSU game’s also a homecoming for walk-on Ashton Richardson–you’ve probably heard that by now, but Luke Brietzke has a little bit deeper look into Richardson’s story here. Andrew Gribble spotlights five Auburn players who haven’t been allowed the luxury of getting their quotes in the paper but are contributing all the same.

BlAUgosphere. Here at TWER, before breaking out the usual statistical wizardry–in case you were wondering, Ben Tate’s performance seems to have no bearing on how well Auburn performs, while Auburn lives and dies its statistical life with Todd–John Magruder isolates what he feels is the biggest worry of the last two weeks:

Look at WVU versus Kentucky.  For the most part, we were playing better last Saturday than versus the Mountaineers.  And yet, late in the game, we committed two awful false starts, killed our drive, and Kentucky ripped the momentum away.  Same thing versus Arkansas.  We hadn’t played as well versus the Razorbacks, but we were in a comparable position as we were in the fourth quarter versus WVU.  And then, we gave up that huge, jaw-breaking kick return.  Arkansas scored from the short field and we gave the ball up on consecutive possessions, one of which was a sure first down.  Earlier in the season, Auburn displayed real chops, that never-say-die fourth-quarter resilience versus West Virginia.  And in almost all the graphs of adjusted yards to-date, there has been an inflection point somewhere in the game where Auburn dug in, stopped a long slide, and roared away with all the momentum.  Lately, we get back in that groove in the fourth quarter only to get knocked out of it twice as hard.

This is troublesome as we prepare for an opponent that seems very likely to let us hang around into the fourth quarter. But don’t take my word for it–read the whole thing.

Elsewhere, holy crap, WarBlogle’s interview with Bret Eddins–Bart’s older brother, member of the 2004 team, sure you remember–is solid gold reading. But one example of many:

7. If you could have done one thing differently in your football career what would it be and why?

Really I don’t know if there is much I’d change. Maybe a few less injuries, but my time in the training room with guys like Demarco McNeil and Spencer Johnson are times I wouldn’t trade for anything. You learn alot about a guy when you are guessing which person on “Maury” that day is a real girl and which isn’t.

Agreed. I’m with Blutarsky–hearing an SEC official admit that he didn’t see the play in question, knew on some level he shouldn’t throw the flag, and still just couldn’t stop himself from reaching for his hanky is not reassuring. It’s about instinct–the first reaction should always be to keep the flag in the pocket, not vice versa.

Etc. Not a surprise–after 4/5ths of the starting lineup on what was already a relatively thin team graduated–that the Auburn women’s hoops team was picked to finish eighth in the SEC this year … Braves and Birds deftly skewers a recent Tony Barnhart offering … Well, good for UT’s freshmen … I have no idea why I feel the need to show this to you, but I do: 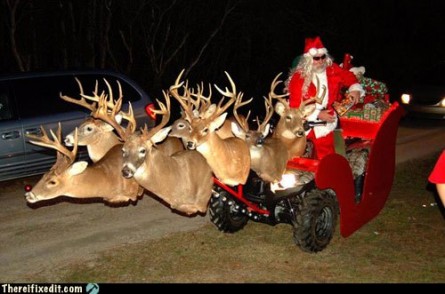