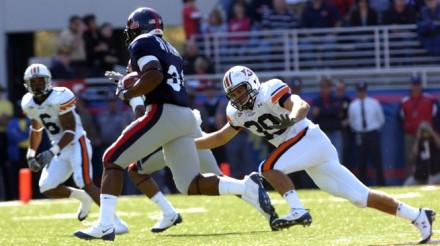 Hey, you know at which position Auburn would just love to have an experienced backup lost for the year? Linebacker, of course! And huzzah, wouldn’t you know it:

The Tigers might be without two scholarship linebackers for quite some time. Sophomore Spencer Pybus continues to have medical issues stemming from a preseason concussion and will likely miss the remainder of the season, head coach Gene Chizik said.

It’s time, unfortunately, to start worrying about Pybus’s career: I’m no doctor, but common sense tells you a concussion that has side effects this serious is a very serious thing indeed. Hopefully we’ll see Pybus continue his Great Story next year (remember, he was the ’08 version of Bates)–Lord knows we’re still going to need him–but I don’t think we as fans can quite count on it.

Making the situation even better is that Harris Gaston is also a great big question mark until further notice:

(T)he injury and playing status of linebacker Harris Gaston “could go either way,” Auburn coach Gene Chizik said Wednesday night … Gaston played in the first four games before suffering an undisclosed injury, so he’s past the point of being redshirted.

“He’s not going to play this week. We’ll see what happens once the weeks go on,” Chizik said.

So: Auburn’s current two-deep at linebacker looks like this:

3. One (not particularly hyped) true freshman

I probably would have said before the season that Pugh and Ziemba were the most irreplaceable members on the team; I would have said a couple weeks ago that Chris Todd had taken over that honor; but today, with the defense already seemingly held together by chicken wire and used chewing gum and zero even halfway-palatable replacements, I think it’s Josh Bynes and Craig Stevens. Auburn just does not have an answer if either of those guys goes down. Light a votive for them.

Your Weekly Sign of the Apocalypse. Chris Todd has been added to the Watch List for the Maxwell Award, given annually to the best player in college football. Chris Todd. Chris. Todd. Maxwell Award. Where is the looking glass? I’m sure we passed through it somewhere back there.

Gee, thanks. Well, no one’s going to accuse Tommy Tuberville of withholding his true thoughts on Auburn’s chances, are they? It’s not really surprising to hear that Tubby doesn’t think much of Arkansas’s chances–for starters, his players never seemed to think all that much of Arkansas’s chances when they took the field against the Hogs, did they? So why would Tubby start rating them now? Second, we also all know that what’s really important for Tubby on a college football team is their defense, and Lord knows Arkansas’s defense genuinely does not look capable of stopping a cold right now. He’s right about that.

Of course, why Tubby thinks Auburn’s defense is that capable of stopping the Hogs, I’m not sure. And now the Hogs have just that extra tidbit of motivation, that tiny little bonus bit of focus that might make a difference on Saturday. On one hand, why Tubby would want to give any kind of aid to Bobby Freaking Petrino is beyond me. On the other, he’s paid to offer his genuine opinion, and I don’t think anyone would have ever accused Tubby of being less than professional. Plus: I don’t doubt for a second he wants Petrino to lose by three touchdowns. I just wish that desire hadn’t clouded his prognostications quite so much.

PPL. Uh, it’s safe to say that Frenchy got the shot at punt returner last week out of desperation more than coaches’ approval:

This seems like a good time to point out that when Anthony Gulley did the same thing for a week, he got all those “baseball player = success” compliments from the coaches. PPL’s residency in the doghouse still looks as permanent as ever.

— Thigpen sounds confident that Mike McNeil will be able to take the field before the season out.He also has some very complimentary things to say about Ryan Mallett.

— Nosa Eguae is still working his way back from his injury, working out indoors rather than with the team outdoors. Rocker’s been on him to keep working hard. Honestly, as much promise as everyone agrees Eguae has, I’d rather just redshirt him and get four full productive years out of him.

— Nothing new on Isom, except that Bitter is amusingly tired of hearing Chizik dodge the question on him the same way.

Etc. It’s been a year since Tony Franklin got canned, so it’s time to compare where Auburn is now to where they were then … Auburn by the numbers, and the numbers compared with Arkansas’s … Chizik agrees that Malzahn will be a college head coach someday, but of course that’s as specific as he gets.