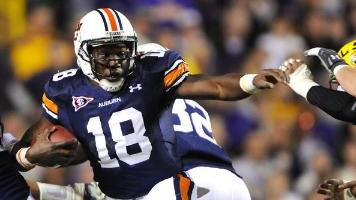 So, yeah, about that. As you’ve no doubt heard/bewailed by now, Gene Chizik apparently has no plans to replace Chris Todd as Auburn’s starting quarterback. However:

“We still think Chris gives us the best chance to win,”

isn’t the most overwhelming endorsement ever and

2. would you put it past Chizik to just flat-out lie to the press, start Caudle, and then say something to the effect of “After a strong week of practice for Neil and going back over the film, we felt that it was time to make a decision at quarterback that blah blah blah”?

The odds are overwhelmingly in favor of Todd starting and finishing Saturday. There’s no doubting that. But I’m leaving the door open a crack for something else, because at this point, I have an awfully hard time believing things are going to be different with Todd at the helm this week than they’ve been for the last three.

Confirmation. The other quote of note from Chizik’s Sunday press meeting:

On Onterio McCalebb: “We try to use him in the game some. He tries to make a cut and it hurts him. It has taken away a little bit from what we want to do.”

So, yes: McCalebb is definitively not himself, and that absence has definitively changed the way Auburn’s offense is being called and run. Aside from Todd’s collapse, McCalebb’s downturn is probably the biggest difference between the Auburn offense that drove all over the place at Tennessee and the one that drove over a cliff in Baton Rouge. (Remember: the wideouts were already mostly nonfactors in Knoxville.) A quote from McCalebb himself here.

Good to hear, and yeah, maybe I’m a sucker, but I believe him. I’ve pointed this out before, but if you remember the quotes in the wake of the 2008 Vanderbilt and Arkansas games, the stuff coming out of Auburn’s collective mouths is genuinely different this year. How much that will matter I don’t know, but it’s something.

— Roof said Auburn was mostly pretty good but gave up “five big plays.” That’s better than mostly giving up big plays and having five plays that were mostly pretty good–and I maintain that neither Roof nor Auburn’s defense have been deserving of the kind of scorn that so many Auburn wags have heaped on them–but it’s not like this is anything new: the D had the exact same problem against West Virginia, Miss. St., Tennessee. Whether you allow TDs via one 70-yard run or a 10-play, 70-yard drive, they count for six points all the same.

— Chizik and Malzahn have discussed getting Fannin more carries at tailback. Given that McCalebb isn’t himself: yes please.

— You can read about this elsewhere, too, but Caudle’s saying all the right cliched things about potentially replacing Todd. Say this for Chizik: he’s got his guys well-prepped to face the microphones, doesn’t he?

That does kind of sum it up. K-Scar on one fateful Auburn first-half possession:

First down: Ontario [sic] McCalebb tiptoed out of bounds after a short gain, leaving yards on the field. He can’t be 100-percent healthy.

Repeat second down: Kodi Burns ran for a first down, but got tackled for a short gain with lots of green grass ahead if he could make one man miss. He couldn’t. Burns didn’t look full-go, either.

First down: An LSU blitzer ran around McCalebb to strip the ball from quarterback Chris Todd, who doesn’t look fine, despite what Chizik says. Auburn recovered but suffered a big loss.

Second-and-long: A screen fooled no one.

Third-and-long: Todd floated a nice pass down the middle. It would’ve been a first down – had true freshman Emory Blake not dropped it.

Etc. Eric Smith will be charged as a juvenile in his assault case. Just so you know.