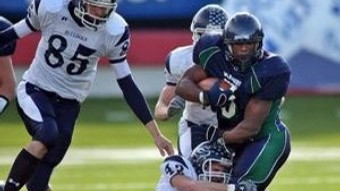 More importantly, unless Dyer has a remarkable flair for the theatrical bait-and-switch (uh, doubtful) there’s not going to be any shockers about his school of choice. Courtesy of Beaver, here’s an article from the site Vype.com (no, I’ve never heard of it, either) which may or may not lift from other sources but in any case is straightforward about where Dyer’s headed:

“I wanted to get it over with,” said Dyer, who had considered waiting until after the season to make the decision. “I wanted to commit, so people knew there was a school I was into.” (Emphasis added–ed.)

So that’s the awesome news. If there’s any less-than-awesome news, it’s that Dyer also adds that “the recruiting process will continue” and that he’ll visit LSU, Ole Miss, Tennessee, and Arkansas. Which is fine by me: if someone wanted to ship me all over the Southeast and look at all kinds of different college campuses, I’d take them up on it. And while there’s always the danger he’ll get snatched away by one of those schools, from where I sit that doesn’t seem too likely: not only has Dyer had Auburn as his No. 1 for months, he’s never even seemed to have a firm No. 2. It’s been Tigers first, Tigers second, and everyone else somewhere beyond that.

The standard caveat is that anything can happen between now and Signing Day, and that’s certainly true. But by every account we’ve had Dyer’s more-or-less had his mind made up for a while, and one visit to schools he’s never seemed that impressed with to start with shouldn’t change that. Gene Chizik’s about to receive a commitment from the No. 1 running back in the nation (thanks, ESPN!) — it’s no time for party-pooping. And while we might want to hold off on the kazoos and party hats until the LOI comes over the fax machine in February, going ahead and hanging a homemade banner that says Welcome and War Eagle, Michael wouldn’t be out of line.