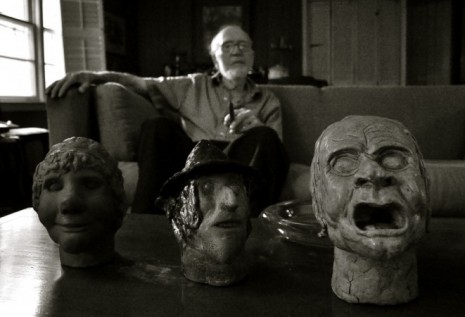 Out Wire Road, past the vet school, soccer fields and trailer parks lives a literary giant. A distinctly Southern writer whose book, “An Exile,” became a movie starring Gregory Peck. Someone who was pen pals with Flannery O’Connor. Someone whom former Poet Laureate James Dickey called “the greatest writer of his generation.” Someone who has books written about him.

His name is Madison Jones. He is 84. He has lived in Auburn for 53 years. A few weeks ago, on a Friday afternoon, I drove out to meet him.

We pulled into the driveway of his 41-year-old, gray-framed home at the same time, me in my truck and him in a car driven by his son. (He would later say “It’s hell not being able to drive.”)

“Yep, this is Madison Jones,” the son answers, pride in his voice.

The Joneses shuffle toward the garage door. I follow. So does Madison Jones’ dog who they just rescued from the pound.

“We thought she’d crawled off into the woods and died,” the son says.

I respond with a “Glad she didn’t” or a “That’d been a shame” and follow the elder Jones into the living room.

He sits on the couch. I’d been warned he didn’t hear well. I join him there.

He is wearing a green plaid shirt and dark blue pants. His shirt pocket holds several pieces of paper and an empty case for his glasses. His glasses rest on his nose. A white beard frames his jaw.

The walls are wood paneling and the carpet is a hue of red somewhere between blood and maroon. Sitting on various tables is an audience of clay and plaster heads. There is a Sitch. She’s sandwiched between the Zephyr and the Roman Soldier. She looks at me down her crooked nose. She cackles. 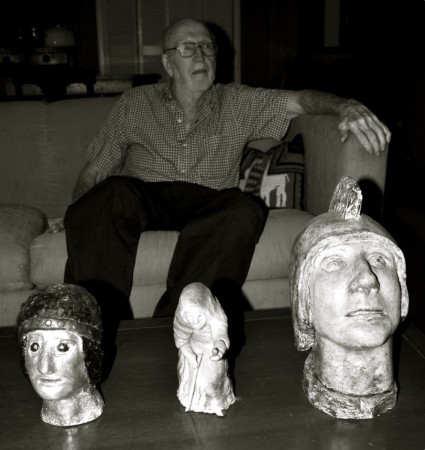 Since my interview experience consists of bar pickup attempts and awkward questions to fashion majors at a speech I covered for class, I start with something I know — Auburn football.

“I’m not a real jumping up and down fan,” Jones says, “but I’m interested. I don’t act like a fan. I never go to games. At the time, I was still a Vanderbilt fan.”

Jones moved to Auburn in 1956 to take a job teaching creative writing at the university. Naturally I ask him about the 1957 team.

“I remember I was here,” he says. “I went to see them once or twice. They had a right good little team. Nothing compared to what football became after that. A lot of homeboys played on the team in those days.”

The Bald Monk sitting on the end table next to the lamp looks at me with his wrinkled, accusing face. “Asking the esteemed Madison Jones about the barbaric sport of football?” he says. “The nerve.”

I shift to writing and to the agrarian movement and to Faulkner — stuff Madison Jones actually wants to talk about.

When Jones was a younger man, he thought he wanted to be a farmer. He even took a year and a half off from college to farm. During that year, he tilled and planted and learned the importance of words like “hard” and “work” at his father’s farm 25 miles north of Nashville in tiny Ashland City.

He talks about the beauty “up in the hills and the beautiful creeks and all, high bluff. That was the scene in my first novel I had in mind, that farm.”

“He’s so much better than the ones all the shouting is about,” that O’Connor once wrote.

The two became friends and Jones went to see her at her farm before she died. An Auburn professor who knows Jones told me that O’Connor gave him a peacock from her farm. Jones doesn’t tell me this, and I don’t see any peacocks, but it seems plausible. He seems like a man who would keep peacocks.

Pre-peacock Jones received a bachelor’s degree from Vanderbilt where he studied under poet and leader of the Southern Agrarians, Donald Davidson. Davidson was also a member of the Vanderbilt Fugitives, which later launched the career of Robert Penn Warren among others.

After Jones graduated from Vanderbilt, he went on to get his master’s degree from the University of Florida where he studied under Andrew Lytle, a giant of the agrarian movement in his own right.

Jones says one of the main reasons he got into writing was the encouragement of Davidson and Lytle. Their influence is evident in his writing.

So is the life he has lived in the South.

“I still kind of feel like I’m not so much an American as I am a Southerner.”

Jones worked at Auburn from 1956 to 1987. For part of his tenure, he was a university writer-in-residence. He taught everything from classic literature to poetry to freshmen English to creative writing.

“I got pretty sick of creative writing after reading all of those lousy stories all those years.”

He has written 11 novels and two nonfiction books. His most recent book, “The Adventures of Douglass Bragg,” was published last fall. He says it will be his last.

He considers his best work to be “A Cry of Absence” — a book concerning race and murder in rural Tennessee that Southern Magazine once called “the last pure tragedy written by a southerner.”

It was published in 1971 and was to be made into a movie. Jones even drove out to Holly…Wood (he drawls a pause between “Holly” and “Wood.”), but it never happened. Part of the reason, he says, was a negative review in Time magazine. He refers to the reviewer as “that bastard.”

One of his books, 1967’s “An Exile,” was turned into a movie. It starred Gregory Peck and Tuesday Weld and was renamed “I Walk the Line.” Johnny Cash did the soundtrack.

The movie released in 1970 to decent reviews. That they weren’t stellar? Jones blames the director for going on vacation during editing.

“Peck himself said there was a good movie lying on the cutting room floor.”

We talk for a good bit about his various books. At the time, I had only read part of his novel “Last Things.” I tell him that. He says it isn’t a good example of his work and that I should read “Nashville 1864” — a book loosely based on his father’s experiences growing up during the Civil War. I tell him I will.

We talk about his childhood. He was raised in a strict Presbyterian home. His father didn’t spare the rod, he says with this wry smile on his face. 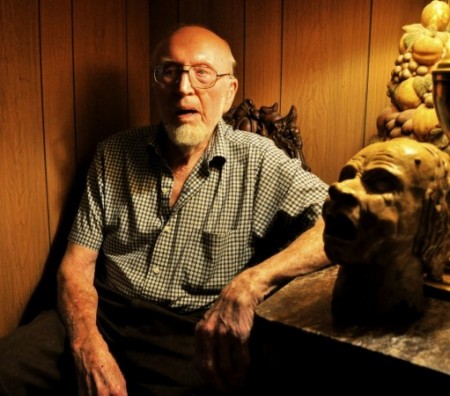 We talk about his influences. He mentions the Bible.

“King James in particular is a wonderful, wonderful book. Wonderfully written, wonderfully poetic. That leads to one characteristic of the South. The Bible was so influential, so much a part of peoples’ lives. Its very language found its way into peoples’ minds and thoughts.”

Sitting on a table to my left is Jones’ clay interpretation of Jesus. Maybe it’s a trick of light, but the face seems to be glowing.

“I’ve often been asked who influenced you most?” Jones says. “And I say Moses. Because Moses presumably wrote the first five books of the Bible.”

He talks about how society’s morals have shifted.

“A great deal of what they called sin when I was a boy is hardly thought to be so now.”

Dan Lattimore, an English professor at Auburn and a former colleague of Jones, and Judy Troy, Auburn University writer-in-residence and creative writing teacher, both had several “Madison Jones stories” to tell.

Lattimore told me of a party he and Jones both attended at a mutual friend’s house. Adult beverages were present. At the end of the night, the friend, decided to drive home. As things happen, he was pulled over and arrested.

Jones, angry that his friend was being held in prison, went to spring him.

He was arrested and had to be bailed out himself.

“There’s a quote about writing that says, ‘Good style and writing is just a series of little surprises,’” Troy says. “That’s what it’s like being around Madison.”

Hoping to one day consider myself a writer, I ask Jones some writing advice.

“Read a lot, write a lot, even if you don’t think it’s very good,” he says. “But take note of what good writers do. A lot of people would love to write, but they either get discouraged or sidetracked.”

I ask if there is anything else he wants to say. He shakes his head no. I offer a “War Eagle.” He smiles and says “War Eagle. I don’t go around War Eagle-ing that much.”

We both give a little laugh.

He takes a long look around the room, his gaze falling on several of his clay sculptures.

“No, I don’t think I am going to write anymore,” he says mostly to himself. 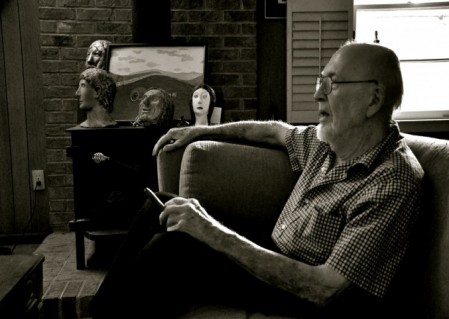 ‘I Walk the Line’ premiere photo via AU Archives.