Alice Fraasa, 21, the most recognizable girl at Auburn University, missed the first football game of her senior year. She wasn’t in town Saturday. She was in Seattle at a video game convention getting paid to be herself.

She grinned and talked and played “Halo 3” and performed other duties corresponding to her public persona while occasionally demonstrating the benefits of the A40 professional gaming headset and posing for photos with teenage nerds who know nothing about Auburn, but a lot about her.

“That’s, like, my fan group,” says Fraasa, an AU communications major. “Like, teenage boys. Video gamers. They love it.”

Which is why, as I sat on the steps of Samford Hall with a bag full of vintage Auburn T-shirts I hoped she’d be willing to pose in, I was so happy to see her round the corner in flip-flops and sunglasses, carrying one of the “Twilight” books, and already wearing one.

I was even happier that she knew why I was happy.

Frassa, the face (and body) of SnorgTee’s brand of mainstream hipster chic knows that dudes—students, alumni, fans—like imagining their school as home of the best. The best football. The cutest coeds. 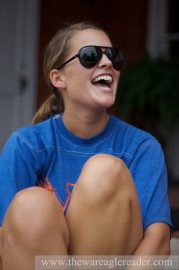 She therefore understands that certain people who know and care about her Auburn connection, like the dudes that asked for a photo with her when she worked at Brick Oven Pizza last year, or the commenter on the popular Auburn football blog The Auburner who suggested Fraasa as the site’s new mascot, might view her, a ‘Net-famous banner ad beauty, as a source of pride—a MOAB in the battle for Hottest List dominance or something.

She understands all that. It just doesn’t make any sense.

“I don’t know what it is,” Fraasa says of the clickable je ne sais quois that has, over the past three years, turned her into an Internet icon. “I really don’t.”

Dr. David Sutton can’t put his finger on it either. But he knows it’s there.

“She’s a hoot,” says Sutton, a professor — Fraasa’s favorite — in Auburn’s Department of Journalism and Communications. “That sounds a bit old-fashioned, but I think the word fits her.

“Alice is very photogenic. It must be her eyes and her smile.”

Last year, after realizing the eyes and smile of the girl from the T-shirt ad on The New York Times website looked familiar for a reason, Sutton called her out in class and announced her not-so-secret identity to a room of dropped jaws and “I knew its!” 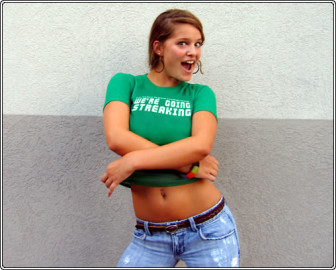 “Everyone in class was like, ‘Oh my God, that is you,’” she says. “And then I had him (Sutton) in a huge class, like a hundred people, and he did this thing about getting to know your classmates, and picked on me, and says, ‘Alice, is there anything interesting we need to know about you? Like, say I’m on the Internet …’ and there were like 10 people who were like, “Oh my God, that is you.’ A lot of times I’ll get looks that people recognize me, but I don’t want to be like, ‘This is how you know me.’ I don’t’ want to be weird about it.”

So frequently was she referenced in the comments on Wonkette, the popular D.C. gossip blog once threatened (only half-jokingly) to ban users who included the term “Snorg Girl” in their posts.

“She told that class that it freaks her out to see pictures of herself on the web,” Sutton says.

“I don’t understand the appeal with me,” she says. “To be perfectly honest, I don’t get it. But maybe that’s what the appeal is, I don’t know.”

She might be on to something. Because what other than natural beauty combined with an utter lack of self-awareness could explain the inclusion of your average, down-to-earth, tomboyish, babysitting, Auburn communications major in a celebrity gossip site’s list of the “100 Hottest Women of 2009,” a list featuring Sports Illustrated swimsuit models and Lohans and Kardashians and Angelina Jolies all bedroom-eyeing the camera in lingerie and thongs and wet T-shirts and birthday suits. And there, somehow, at No. 99, innocently sandwiched between a naked Eva Mendez in cowboy boots and a leather corseted Christina Ricci, is a picture of “Alice, The Snorg Tees Girl” sitting on a bench in jeans and a (dry) SnorgTees “I Love Lamp” Anchorman T-shirt, and, you know, holding a lamp. It’s practically prudish.

“She’s the only person on there that’s not a celebrity from movies and stuff like that,” says Walls, the 28-year-old Georgia grad and co-founder of SnorgTees, which is based in the Atlanta suburb of Marietta where he and Fraasa grew up. “And she’s the only one that’s not insanely Photoshopped.” 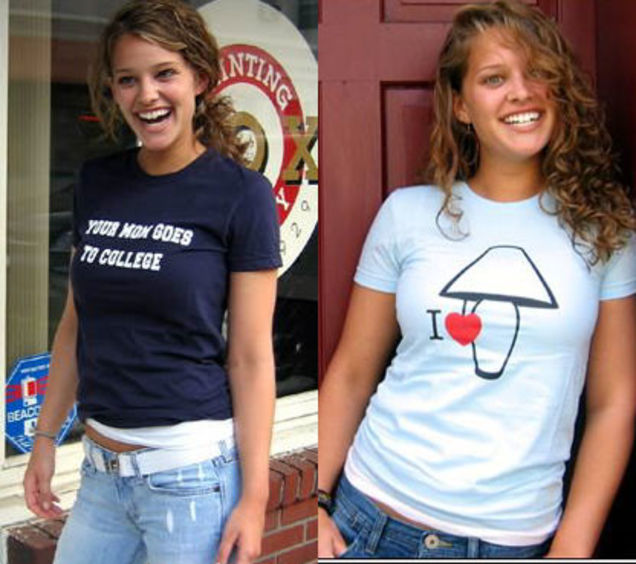 That the photos of Fraasa used by the company are the point-and-click results of Walls and Co. simply goofing off with their friend’s cute kid sister–she started modeling for them at 17–embodies the spellbinding amateurism that seems to anchor the Snorg Tees Girl phenomenon. So, too, that Fraasa is compensated only in keeping the shirts she poses in. She is not a professional. She weighs more than 100 pounds. She likes Auburn football. She likes Harry Potter. She likes the Braves. She likes food. She poses for pictures in T-shirts for her friends because she likes T-shirts and because they’re her friends.

“People are like, ‘Oh, I can’t believe they don’t pay you,’” Fraasa says. “But so much more has come from it” — last weekend’s all-expenses-paid trip to Seattle, for example — “that I really don’t care.”

Would she like to parlay the popularity into bigger gigs after graduation?

“I would love to,” she says in a way that suggests she doesn’t really think it could happen. But if it could? She likes sports, so maybe something “like Erin Andrews,” she says–minus the stalking.  (Andrews came in at No. 30 on the “100 Hottest…” list.)

The Snorg Tees Girl’s low-key, go-with-the-flow approach, and that she has yet to pursue publicists or agents or reality shows despite all the attention, is a recurring angle in the interviews that keep the attention coming. And there have been plenty of interviews — from blogs to alt-weeklies to a 2008 Associated Press story that ran in USA Today, the Chicago Tribune and the Tuscaloosa News.

“The Accessible Internet-Famous Jessica Biel,” Jezebel called her in a 2007 post attempting to explain the Girl Next Door appeal of “the most important thing on the internet right now.”

“She’s a compulsive smiler like Natalie Portman in ‘Garden State,’ only with the rack of ScarJo and the tan of …. a girl who works at a tanning salon.”

You can hear the gratitude in Matt Walls’ voice.

“We just kind of lucked out growing up down the street from her,” he says. “She really is the girl next door. To me, it’s like the girl every guy fancies themselves meeting and dating.” And, of course, getting to model for their once fledgling T-shirt company, which, according to a recent story in U.S. News and World Report, now sells $5 to 10 million of merchandise. 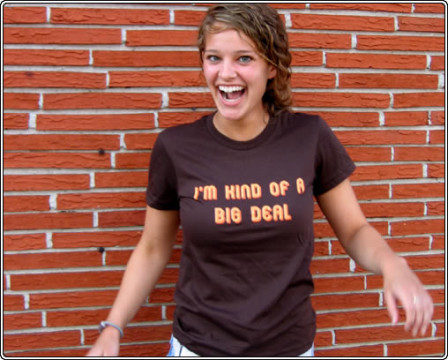 In April 2008, just four years after Walls started the company in his parents basement, Snorg Tees trailed only American Apparel and UnderArmour in terms of Internet advertising presence among apparel retailers. Their 249 million ad displays beat out companies like Levi Straus, Nike and competitors Busted Tees. Of that number, Walls said nearly half still featured Fraasa, despite the company’s now regular use of professional models.

“When we first started running some banner ads with her in early 2006 we were getting more than double click-through rates,” Walls said. “There were companies spending thousands of dollars trying to generate the best flash ads but all we had to do was put a picture of Alice up there and we were doing better than they were. We had other cute girls modeling, but I just don’t think [SnorgTees] would have generated the same [attention] without her.”

Neither would have the vintage 1987 Iron Bowl T-shirt she posed in for us against the War Eagle wall by J&M Bookstore a week before Auburn’s season opener against Louisiana Tech.

The man — gray hair, mustache, nice car — parked right in front of her on College Street, got out, and you could see it in his eyes and hear it in his voice: He was an Auburn man in Auburn, and wow, War Eagle–he couldn’t help himself.

“Now that,” he said, staring at the vaguely familiar Auburn vision in front of him, “is the calendar I want.”

Alice smiled her 100-yard, million-click smile and laughed for him as he walked away mmm, mmm, mmm’ing to himself, and then rolled her big eyes.

But she understands… Glory, Glory to ol’ Auburn and all that.