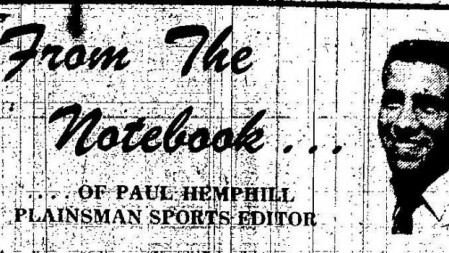 Paul Hemphill, noted newspaper columnist and author of “The Nashville Sound,” “Leaving Birmingham,” and “Lovesick Blues: The Life of Hank Williams,” died July 11. He was 73.

His last book, “A Tiger Walk through History: The Complete Story of Auburn Football from 1892 to the Tuberville Era,” was published in 2008.

Hemphill was a native of Birmingham and graduated from Auburn in 1957.

It was also a good year to be The Plainsman’s sports editor.

[you can read it in its full, antique glory here]

I’ll Remember…
What does it take to be the best football team in the whole nation?
Lots of things, friends, lots of things… more than you’d think.
Most of’em are obvious, like scoring more points than the guys at the other end of the field every Saturday, or blocking hard and tackling the same way.
Your Aunt Matilda – who’s never seen a football game in her life – knows it takes a lot of good football players and the same amount of coaches molded into a happy, winning machine.
But there are plenty of things making for undefeated seasons which never get into the headlines… some folks call’em “intangibles”… others name them “loyalty” and “pride” and “desire.”
This Auburn team, the 1957 one, the one that’s sitting right on top and looking down at everybody else in the football world, had those “intangibles.”
Maybe that’s why almost everybody calls it the best in the nation instead of just another good football team.
And maybe I’m too sentimental, but it’s gonna be so, so hard to forget the many little – yet big – things that happened in the fall of 1957 to the bunch that has to be called the greatest in Auburn history.
I’ll remember all the surprises that came along week by week… things such as Lloyd Nix’s brilliant quarterbacking that cold, wet, day against Tennessee in his first college game at that position…
And the sight of unknown Mickey Welch, jumping into the battle against Georgia Tech in his hometown and stopping – all by himself – the Engineers’ most serious scoring threat.
I won’t forget either the raw courage shown by Bobby Hoppe when he refused for three Saturdays to give in to two ribs broken in the opener against Tennessee… Nor the way 165-pound Tommy Lorino buried back into the fray against Kentucky minutes after being laid low by 240-pound Lou Michaels.
The same kind of stuff was shown all year long by Captain Tim Baker, who was so banged up even before the season began that he shouldn’t even have been in a uniform.
“Desire,” is the nice word they call that… it’s also “guts.”
And I’ll never forget the display of same rendered by loose-jointed John Whatley, long, lanky and almost-forgotten, when he threw off his parka that cold afternoon in Birmingham and replaced Jimmy Phillips in a manner described by the All-American as “better than I could ever have done.”
The sights in the Auburn dressing room after that come-from-behind win over Mississippi State are even more clear in my mind.
There was end coach Gene Lorendo, big, tough, and with the booming voice, so happy about “Ol’ John’s” (Whatley) golden moment that he was almost in tears. And outside the clubhouse, there was backfield teacher Buck Bradberry, who was telling writers – even before they asked – what he thought of his Tigers’ coming from behind for the first time.
That was “pride.”
And when you start talking about “loyalty,” you have to mention everything “Shug” Jordan did, everything he said, all year.
He showed it each time he was asked about one of his men. Never, not once, was there a word of criticism for a player who had obviously made a mistake.
Never did the savior of Auburn football portray any doubt that the men who played for him WERE men.
That, you have to call “loyalty.”
And never did Jordan’s loyalty and respect of his football players show more to this fan than last Saturday against Alabama in a fleeting incident that almost everybody missed.
It was midway in the second half when graduating Bobby Hoppe had prematurely ended his college career with a twisted elbow.
And as the gritty Chattanoogan sat dejectedly on the Auburn bench, head down and probably with a tear in his eye, his coach sensed the need for saying one last word of gratitude to the one who had exemplified the Auburn spirit throughout the football season that was almost endd.
I’ll never, ever forget the look of fatherly pride in “Shug” Jordan’s eyes as he cupped Bobby Hoppe’s chin in his hand and lifted his head to say a simple… “thank you.”
That was loyalty, pride, and respect.
And I’ll remember…