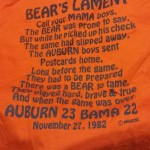 War Eagle! It’s time to turn our attention to the one thing we all love, and that is beating Bama. Let us harness the power of the past to slay the crimson dragon that dare enter our lair. The first two items are from my collection. Bear Bryant autographed Bo Jackson print: Yes, you read […] 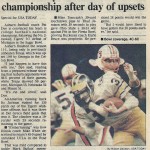 Members of the 1983 S.E.C Champions (and National Champions, as far as I’m concerned) Auburn team will be honored Saturday during the Florida Atlantic game. The ’83 team is my favorite Auburn team of all time. We all know the story from that year. Playing one of the toughest schedules in college football history, Auburn […] 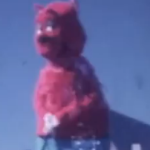 Since these silent shots of a giant tiger deciding the fate of a giant bulldog with a golf putter and of the real life-sized facade of the “Strip State Club” are almost certainly homecoming decorations, the “Circa 1961” description for this fantastic old video of Auburn’s campus is probably off circa a year. (Mississippi State […] 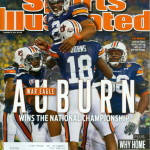 PREVIOUSLY: Is it possible (in both the physical and spiritual realms) for Auburn to ever have a better season than 2010?  PREVIOUSLY: Do the Knights of The War Eagle Reader Roundtable still thrill to memories of Tommy Tuberville? When will Auburn win its next national championship? Kelly Jolley: God knows.  By that I do not […] 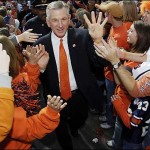 Previously: The Knights of The War Eagle Reader Roundtable ponder the possibility of (ever) topping 2010. “Knights of the TWER Roundtable”—it sounds good and it reads better, because these dudes know their stuff—they read their blogs and their Bibles and they, these dudes right here, that I’ve assembled and asked to answer hard, pressing Auburn […]