The 1920s were not kind to Auburn. API had been underfunded for years, and the president, Spright Dowell, spent most of his time focusing on the school’s financial struggles. He was known for favoring the Agriculture Department (and its interests in the state) over other college concerns. He especially opposed intercollegiate athletics, believing them to be a distraction from the college’s educational purposes. It was no surprise that Auburn’s football program began to suffer under Dowell’s tenure because he systematically removed the coaches’ ability to offer incentives to new recruits. This did not endear him to the students. 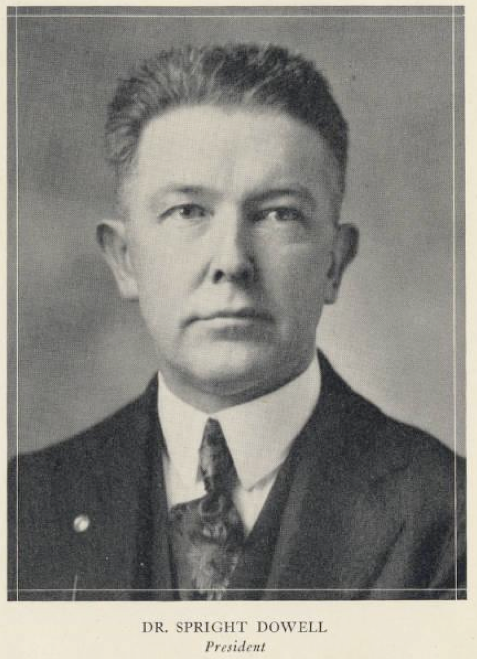 The absolute nadir for Auburn football came in 1927. Just before the season started, star quarterback Frank Tuxworth was booted off the football team (and possibly briefly expelled) by President Dowell for drinking and trying to sneak into the girls dormitory. Dowell was a strict Baptist who had enacted a strong moral code at API, and his contempt for college football and unseemly behavior both came to bear in what was later called “the Tuxworth affair.”

To make matters worse, Auburn began the season 0-2, with losses to lowly Stetson College and then to Clemson. Anxiety on campus reached a fever pitch. On the Sunday after the Clemson loss, a group of 24 juniors and seniors (“the Double Dozen”) plotted a course of action. They met with alumni across the South in an attempt to oust President Dowell. One student described what was happening as a “bolsheviki uprising.” The last straw, in many of the students’ opinion, came on the Friday night before the Florida game. In a dramatic speech at the pep rally, Coach David Morey publicly announced his resignation, which would take effect after the next game. The student body began to seethe, and the object of their indignation was President Dowell. School spirit turned into rage.

In a chaotic scene, a bonfire was started in the middle of the street at Toomer’s Corner. Apparently, a great deal of property damage was done up and down College Street while tinder was being gathered for the fire. Students went around campus posting placards that read, “To hell with Spright Dowell!” Several students caused mayhem on the trains passing through town. The next day, Auburn lost to Florida 33-6, their third loss in what would be Auburn’s first winless season. When word got out about what had happened at Auburn, the governor and trustees could not ignore the news.

The next Friday, a group of student leaders, including the editor of the Glomerata, Lawrence Whitten, and President Dowell were called into a special meeting of the Board. Whitten made an impassioned plea to the Trustees arguing that Dowell was ruining the school. “The cause of the unrest and disorder” was not football, Whitten claimed, but Dowell’s poor relationship with faculty and students. He did, however, mention “the Tuxworth affair.” Dowell, in his own defense, claimed that his opponents were primarily driven by football interests and should not be taken seriously. Governor Bibb Graves, unlike the previous governor, was not sympathetic to Dowell and within a month the president was forced to tender his resignation.

Speaking of tinder, while many local news outlets mentioned the uprising at Auburn, including the bonfire, one important detail was left out. In the students’ haste to make a fire big enough to demonstrate their displeasure, one of the beloved oaks—possibly this one—near Toomer’s Corner caught fire and burned. The Plainsman, however, made mention of it in a column condemning the “undertow of mob rule” that characterized “the wave of enthusiasm.” 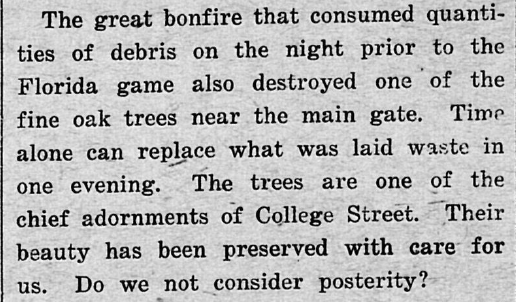 Whitten made sure to include a depiction of the riotous scene in the 1928 Glomerata. 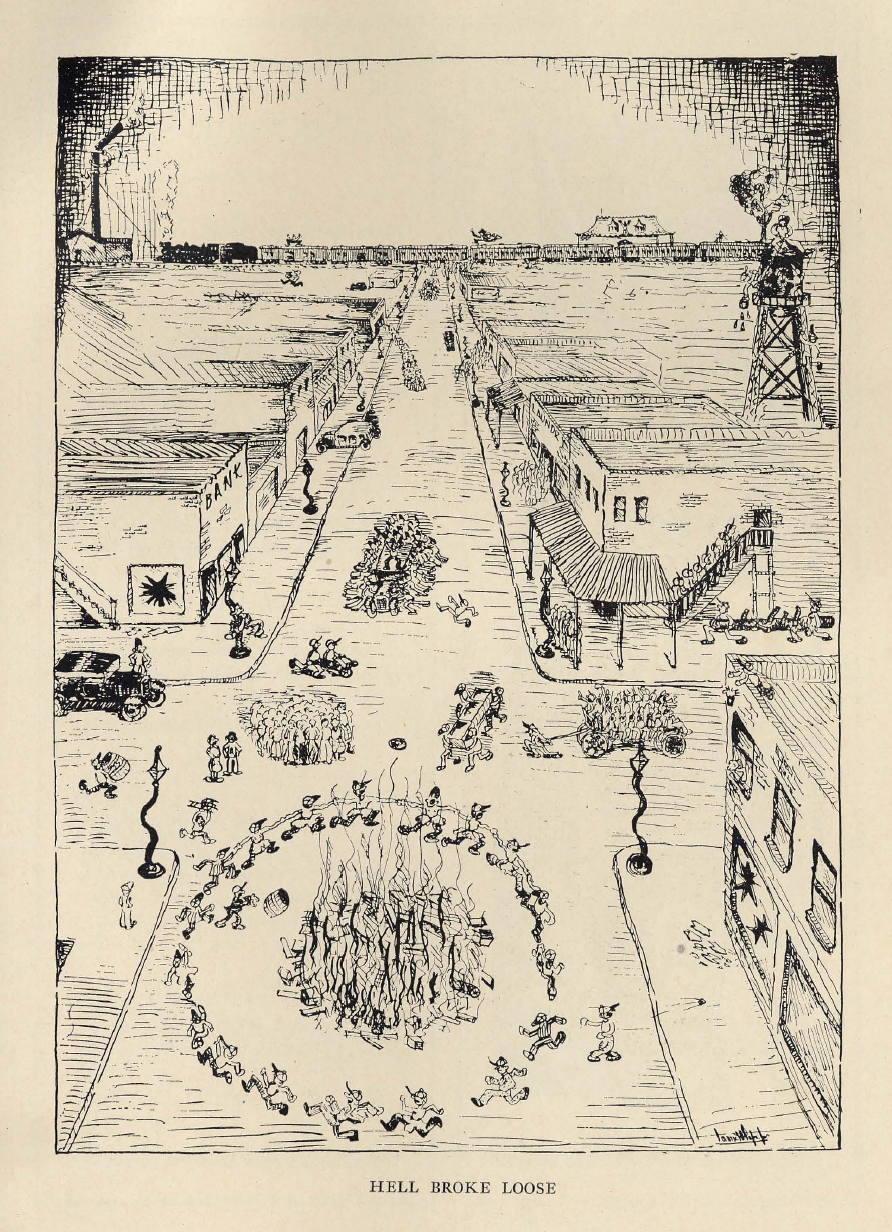 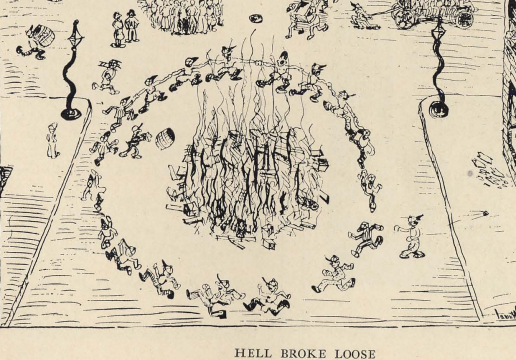 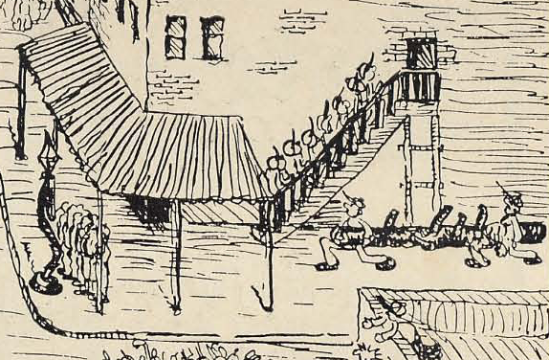 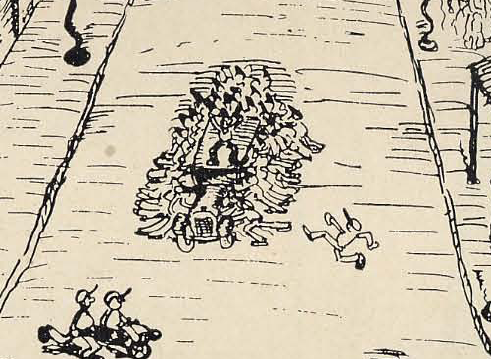 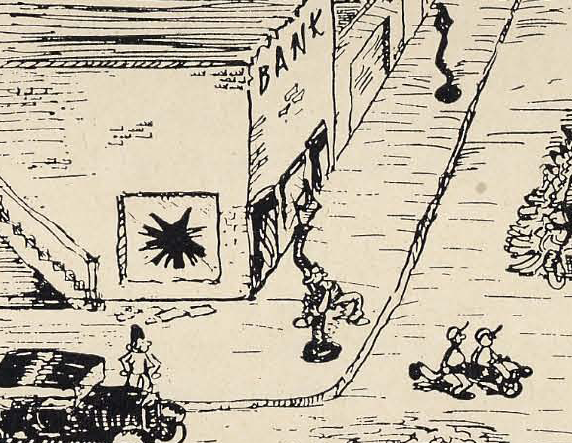 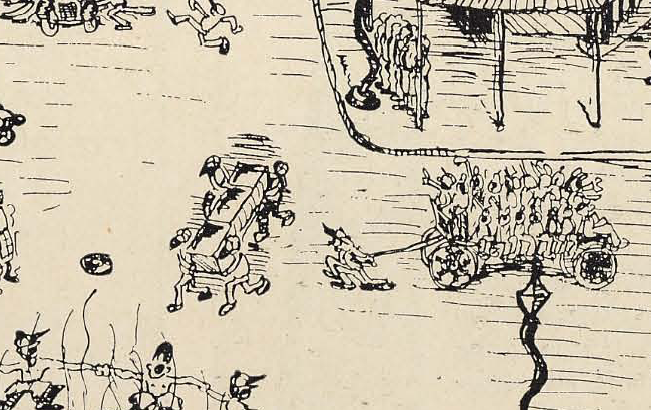 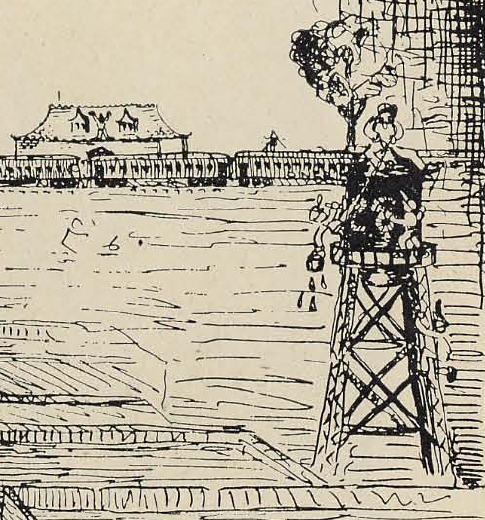 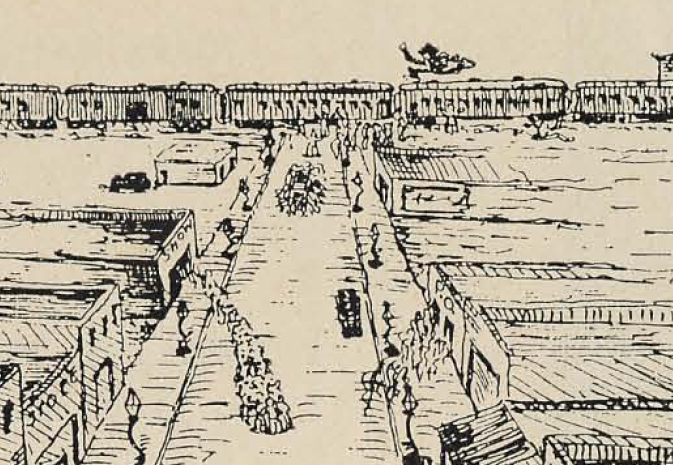 In the cartoon, it is obvious that the scene is drawn from the perspective of one looking down College Street toward Toomer’s Corner in the direction of the railroad tracks. I plan to post another story soon about the train incident alluded to in the Plainsman piece.

Thus, the 1927 season saw Auburn lose its starting quarterback, head coach, its president, and a Toomer‘s Oak. It was so bad that the 1928 Glomerata also included this joke:

Three more abysmal seasons would follow before the Tigers again had a winning campaign (thanks to the Iron Men).

Michael Strickland (AU ’97 & ’98) lives in Murfreesboro, TN with his wife, Mary (AU ’98) and three kids, all of whom merit multiple bumper stickers. He has a PhD in Theology from the University of Birmingham, England, (the other Birmingham) and is Assistant Professor of Theology at Amridge University. Michael is from Moulton, AL, where the finest Southern accents still reside. He has never destroyed a Toomer‘s Oak, although he might have had something to do with that maple tree at Concourse Apartments. He has a low-skill website: professorstrickland.com. He tweets at @stricm3, which was part of his old Auburn email address.

* The original capacity of Auburn’s Jordan-Hare Stadium was twice as much as everyone says
* The almost names of Jordan-Hare Stadium
* ‘Jeopardy’ contestant whose ‘Cheers’-referencing final response went viral wishes she’d written ‘War Eagle’
* Auburn and Virginia have ‘colorful’ history
* The G.I. Joe from Auburn
* War Eagle found not guilty
* John Travolta in an Auburn shirt