There was no question.When she was 16 and it came time to buy a new car and pick out a license plate, there was but one option. You don’t pass up an opportunity like that, not if you’re a Trekkie.

And 18-year-old Auburn freshman Tori Chancellor is a Trekkie. An almost-cry-when-you-see-Patrick Stewart-on-Broadway, take-a-cardboard-cutout-of-Spock-to-senior-prom level Trekkie. And this is her Tasha Yaris.

“When did it come to me for the first time? The first time I heard the name,” Chancellor says.

The Pre-Media Studies major from Montgomery is talking about the name Yaris, which apparently is an actual, real-life vehicle that Americans can buy. Her neighbor worked at a car dealership and told her parents about this wacky new car–not a new model, a single car–he had just gotten in that might be perfect for Tori. It’s the only car she’s ever had.

“The Yaris is very, very real,” she says. “Europe is crawling with Toyota Yarises (Yari?). I’ve never seen another one in America.”

And of course MYTASHA is a reference to Tasha Yar, the cult favorite Chief of Security on the Starship Enterprise who was killed off just 23 episodes into Star Trek: The Next Generation (1987-1994).

Chancellor has been watching Star Trek–pretty much all of them–for nine years. But the TNG episodes, those are her roots. Her step-father turned one on one day when she was 10. She was hooked, so hooked that Santa brought her 10 TNG action figures when she was 11. (Remember, this is, like, 2006.) 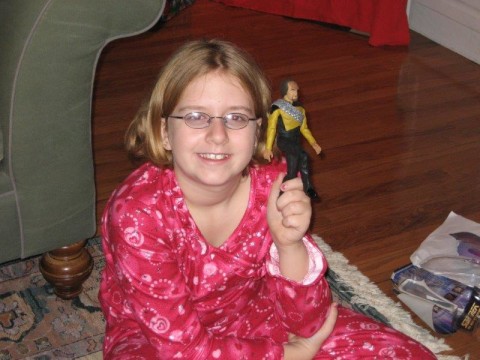 But despite what the vanity plate would suggest, Chancellor isn’t some Yarhead. She’s not posting Data-Tasha fanfic on Tumblr or anything. The only one of those action figures she still has (not counting the decapitated head of Troi she found while packing for Auburn) is ol’ Riker, who remains frozen in a place of honor on Chancellor’s dresser back in Montgomery. But after three years of driving her Tasha around, things between her and Tasha couldn’t help but change.

“She grew on me after I got the tag,” Chancellor says. “Now that my car has her name, I feel this sort of kinship with her.”

“It’s awkward when I have to go into an explanation because people look at me like I have to be institutionalized,” Chancellor says. “But I love it when people do get it (once she tells them–no one’s ever figured it out without hints). It just gives me really good feelings.”