Considering besties constantly swap clothes, especially when they’re on career-defining rock tours together, there’s a decent chance the Auburn T-shirt seen in the final episode of Taylor Swift: Journey To Fearless was actually T-Swizzle’s. You may have heard something about her rerouting the Fearless tour through Auburn to hug some guys; you don’t just shake something like that off. (Can’t see the video? Try here.)

If so, she wouldn’t be the only pop superstar to have her Auburn swag later caught on camera dozens of miles from the Plains. I think you know who I’m talking about.

Or it could just be her friend’s shirt. And from way back. Because, what do you know—said friend and backup dancer, Claire Callaway, is from Huntsville. And she’s an Auburn fan.  Like, even in 2012 she was an Auburn fan. At least for the season opener. Like, an Auburn pumpkin-carving Auburn fan. 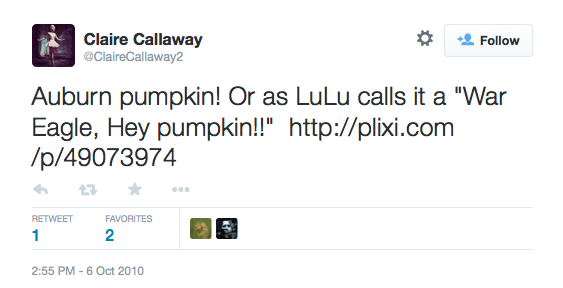 By the way, looks like our boys got a hug from Mama Swift, too. Here’s a clip from the second episode of Journey to Fearless. (Can’t see the video? Try here.)

And hey, since you can’t listen to this sick beat on Spotify anymore, just leave this page up and hit refresh whenever you get the hankerin’. That’s what I’m doing.