Adrian Karsten baited him—surely the Bama fans who called for his head, and the administrators that gave it to them, could see that.

Talk more about this crazy thing you did!

“It was hard, it was real hard to do because I spent four good years in Auburn and my heart’s in Auburn, but you know, I’m a cheerleader, and I’m cheering for my team.”

It was the last time Christopher Bailey cheered for his team, or any team.

Bailey, who had been Auburn’s head cheerleader the previous year, had transferred to Tuscaloosa in the fall of 2003 out of a desire to cheer competitively, something Auburn cheerleaders didn’t do, and to be closer to his girlfriend, who also cheered for the Tide.

It was a hard decision to make, but an easy angle for a story leading up to that year’s Iron Bowl.

“Coming back to Auburn to cheer at this year’s big game will be tough,” Bailey told the Plainsman in an interview the week of the game. “I know I am going to be nervous.”

The nervousness stemmed from wondering how he’d be received back in Auburn—by Auburn fans, not Bama fans. The Bama folks already knew he still had feelings for Auburn. He was a lifelong fan. His dad was a graduate. Bailey had spent four years there. It was only natural. And they were cool with it.

In fact, though Alabama’s cheerleading coach insisted to the Plainsman that the Tide did not poach other school’s cheerleaders, Bailey was basically recruited to Bama, and not just by a girlfriend who no longer wanted the hassle of a cross-state, cross-rivalry relationship (and whom he eventually married).

Bailey’s father, a 1970 Auburn grad, told the Plainsman that Bama had been trying to secure his son’s services for two years, which seems to jibe with a quote from Bama cheerleader Adam Rhoden: “I’ve been trying to get him to Bama for a long time.”

“I know he’s still an Auburn fan at heart,” Rhoden said. “Nobody here has a problem with that.”

The following Monday, after receiving a barrage of angry emails from Bama fans who most definitely had a problem with it, or at least with Bailey’s comments to Karsten (made while the Tide was down 16 points), University of Alabama Athletic Director Mal Moore issued a press release stating that Bailey, after learning “a valuable lesson in dealing with today’s media”, was no longer a Bama cheerleader. 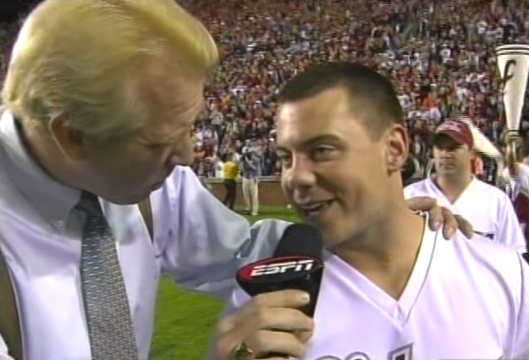 “He wanted to cheer competitively, and he didn’t want to give that dream up,” Bailey’s mother Cel told the AP when the news broke. “I guess it’s a dream he won’t be able to realize.

“He got himself in a jam. He didn’t really say what he meant to say. I guess he learned a life lesson here.”

Judging by the response the guy Adrian Karsten called “the most courageous man in the state of Alabama” gave to my interview request last week, I’d say he learned it well: “Hey Jeremy. Thank you for reaching out. I am going to decline on the interview. Take care and War Eagle!”