We have realized that in hindsight some of you were confused by last week’s column in which we showed a meat grinder logo and discussed Auburn’s schedule.   But after Saturday’s events in the SEC and Auburn’s domination of the boys from Red Stick, the lesson is clear:  The 2014 Auburn Tigers are the meat grinder and the rest of the SEC is going to be ground chuck.

What did we learn from LSU?

The 2014 Auburn defense has dramatically improved.   In the glow of making the national championship game many Auburn fans have forgotten how poor the 2013 defense was.  The 2014 defense isn’t the “high wire act” the 2013 defense was – relying on huge red zone stops of the opposing offense every time.  This year’s defense is much more likely to stop the other team before they get anywhere near the red zone.

Here is a snapshot of the 2013 Auburn defense compared with the 2014 version: 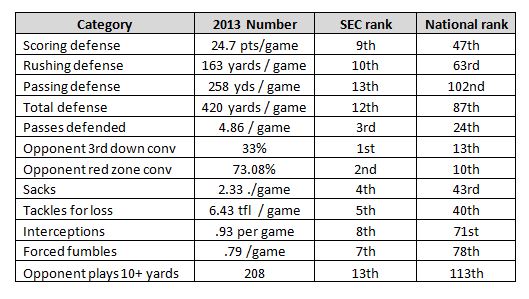 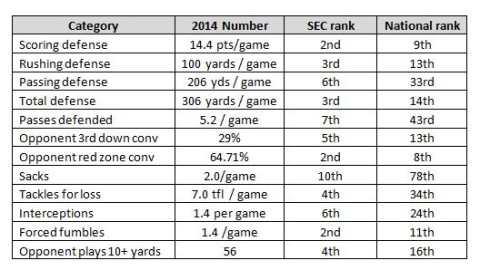 The defensive improvement is evident from the numbers above.   The one area where Auburn has declined is one that was predicable – Auburn isn’t getting as much pass rush and as many sacks.  But if the rest of the numbers hold up that won’t matter.

In its first two games against SEC opponents the Auburn defense faced 3rd down on 24 occasions.  The other team only converted TWICE in 24 attempts.  Forget everything you know about how great the Auburn offense is – that is championship level defensive performance.

Against LSU on Saturday night the Auburn defense confused a freshman quarterback making his first start and took away the running game.  The Auburn defense felt abused and pushed around after its mauling by Jeremy Hill last year in Baton Rouge and wanted payback.  They got it.

On offense the biggest spark was the return of Auburn receiver Sammie Coates to play maker form. LSU came into the game attempting to take away Duke Williams, who had become the security blanket of the Auburn offense.  But with Coates back playing well the entire offense started to click. It almost seemed as if he had been frozen and come back to life to save the day……

DOWNLOAD A HI-RES VERSION HERE. (Please don’t have Sammie America autograph it for you, not yet. Or at least don’t pay him to. Neckey could probably use a few bucks, though. Those shirts aren’t cheap.)

What do we need to know about MSU?

Van made a great comparison on our podcast this week: This game will be like the 2010 Auburn LSU game.  It will be a true heavy-weight bout with two excellent teams playing well and trading punches.  MSU is going to make plays against Auburn on both sides of the ball.  But the difference in the game will be Auburn’s passing game breaking out and the overall experience of this Auburn team in huge games and pressure situations.  Will it faze this Auburn team to be behind in Starkville with a bunch of MSU fans ringing bells at them? Not at all.  Auburn wins 27-24.

Auburn   (Bring it on Dan Mullen.)
The Very Good:

MSU (A reality check is coming, but reality just may be that this is the second best team in the SEC.)

Ole Miss (Will they have a letdown at College Station??)

Texas A&M (that South Carolina win looks less and less impressive every week.  And the defense is still awful.)

Arkansas (For one week we are all on Team Bert.)

Georgia  (Without Gurley?  We probably need to drop them down 2-3 spots.)

Missouri   (Your 2014 SEC East Champion thanks to Mr. Autograph Hunter)

Tennessee  (The checkerboard pattern in the stands was nice, anyhow.)

LSU (I guess the Jordan-Hare grass did not contain any dramatic insights?)

South Carolina (So it was all just Clowney?)

Vanderbilt  (James Franklin for SEC Coach of the Century.)