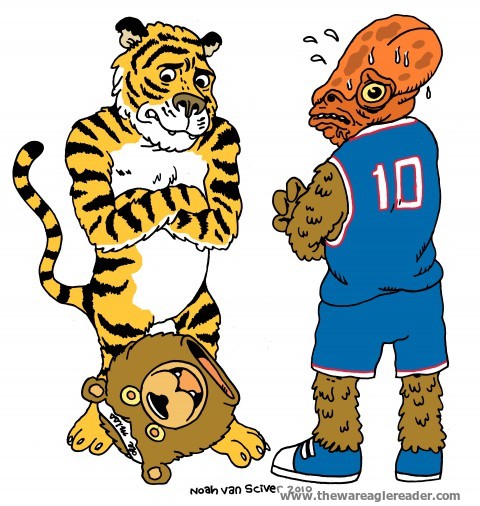 The South Carolina game – the good, the bad and the ugly:

The Old Ball Coach showed up in Auburn last Saturday night with his offense.  No, no “Steve Spurrier, everyone’s favorite comedic coach who runs the ball 55% of the time and wins with defense” but “the Fun n’ Gun Old Ball Coach who makes fun of Tennessee and likes to sling the ball around a little bit.”   As Van has pointed out this was vintage “Mighty Gators” Spurrier, and at least a couple of those Carolina TD passes looked like doctored footage from a 1994 Florida game.  (Where was Terry Dean when we needed him??)

And despite everything Coach Spurrier pulled out of his 1994 playbook, and despite Auburn’s woeful lack of a meaningful pass rush (even when the Carolina center was literally ROLLING the ball back to the QB), the Tigers still managed to find a way to keep scoring and win the game.

And for the third time in the last five Auburn-Carolina contests, the game ended with the Gamecock QB throwing the ball into the Auburn end zone and failing to connect.

It wasn’t pretty (at least on defense), but we will certainly take it.

We are obviously very happy with the initial rankings of the College Football Playoff Committee.  They said, that they were going to rank teams based on these criteria and they did so:

2) Who have you played? Where did you play them?

4) Are there any extenuating circumstances (injuries) in your losses?

5) Did you win a conference championship? (NOT IN THE RANKINGS YET)

Here are a few things the committee doesn’t give a crap about:

1) How well you are playing now.

2) How many games you won last year or over the last 10 years.

3) The name on the jersey (see Ohio State ranking).

4) How the other polls rank you or what talking heads on ESPN say about you.  Do not pay any attention at all to what Danny Kannel or any other “expert” is saying on ESPN – the Committee isn’t, so why should you?

The Manifesto on Playoff Ratings:

1) The system and the current situation is good for Auburn – win out and we should be fine even if we don’t win the SEC.

2) These rankings will be MUCH more fluid than the traditional polls and fans need to prepare now.   Auburn does not start at #3 next week – everyone gets re-evaluated from the ground up every week.   That is actually good for us because we play such a tough second half schedule.  But teams will go DOWN spots in this poll after they win (over a bad team) and fans of those teams are going to lose it.

3) The other wrinkle referenced above is that the actual end of the season rankings that really matter will have a different criteria added in that is not included now – bonus points for winning the conference.   The committee has been clear that they will do this.  Fans will freak out when a team moves up a spot the last week after weeks of being below another team – watch for it.

4) The real interesting thing to watch will be in next week’s ranking – the 2 loss loser of the Auburn – Ole Miss game as compared to many of the one loss teams from other conferences.  I expect the loser of the Auburn Ole Miss game to not drop further than 9th and will be ahead of one loss teams such as Ohio State or Baylor. A 2 loss Auburn still has better wins than a one loss Ohio State.

5) The bottom line for Auburn was the same as it has been all along.   The Kansas State win was the biggest non-conference road win anyone in America has.  We need them to keep winning.  Our incredibly tough schedule gives us a huge advantage under the new system because they care about tough schedules more than anything. Cheer for Kansas State every week.

7) The AP and Coaches polls mean nothing anymore.  Ignore them.

8) Who is ranked in the spots below #4 will still mean a great deal at the end of the season.  The Committee will decide who goes to all the major bowls based on those rankings – the bowls do not get to pick like the old days, the Committee will assign teams based on conference tie-in and the Committee rankings.  (So for the major bowls there won’t be any more “We will take Team X over Team Y because they will sell more tickets.”)

9) None of these Committee rankings matter until the very last one that sets the playoff and the bowl games. Until then it is just a window for us into their methodology and thinking – take it that way and not as any kind of life altering event.

Special teams have not been so special this season:

Auburn has been the benefactor of excellent and memorable special teams play the last few seasons.   While losing the kicker and punter off of the 2013 team led to some anxiety about the performance of the special teams, it is important at this point in the season to look at how they are performing and where Auburn needs to improve:

We included penalty yards in this discussion because Auburn has gotten worse in this category and these combine to create ‘hidden yards’ which Auburn has lost compared to how it performed last year.  They are ‘hidden yards’ in that they do not show up in the box score in the total yards for the offense or the total yards allowed for the defense – but if Auburn is doing a worse job in these categories, then the opposing team gets better starting field position and has an easier time scoring and Auburn gets the opposite.   If we did not count the huge increase in punt return yards from 2013 then Auburn is losing about 37 yards per game as compared to last year’s team.  Those are 37 yards given to the opposing team.  When the increase in punt return yards is included that number drops to about 20 yards per game difference.  For Auburn to reach its ultimate goals of winning the SEC and reaching the College Football Playoff the special teams are going to have been at least good (they don’t have to be great or the best but they can’t be a huge weakness either.)

What do we expect from the Ole Miss game: The Irresistible Force meets the Immovable Object? 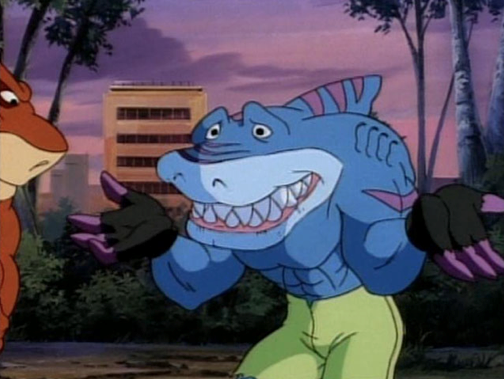 In this case the Auburn offense is the irresistible force, pitted against the Ole Miss defense in the role of the immovable object.  Auburn’s offense against South Carolina played at a very high level – as well as it has played since the SEC Championship game against Missouri.   Now it heads into Oxford to face the best defense in the SEC. Ole Miss has allowed 84 points in eight games which is amazing in this era of powerful offenses.

You know what not to expect?  Admiral Akbar on the Ole Miss sideline.

Can the Auburn defense get pressure on Bo Wallace and bring out the bad “Dr. Bo”?  In last year’s game Auburn was able to get six sacks and make fourteen tackles for loss.   Dee Ford and Carl Lawson each had two sacks.   That pressure on Wallace was a big element in Auburn winning this game last year.  But Dee Ford and Carl Lawson aren’t walking through that door. Auburn has had real problems generating pass rush this year, especially from the defensive end position.  We are concerned what could happen if Wallace is able to sit back in a comfy chair and leisurely choose his targets downfield while his offensive line deflects any efforts at an Auburn pass rush.

Which injured Ole Miss starters will play Saturday and how effective will they be? The Rebels not only lost at LSU last weekend—they lost some key players. How much of a difference will that make in the game?

To win the game Auburn just needs to execute and not make mistakes. If we need to punt the ball and play defense that is fine – don’t force something and give Ole Miss a short field.  LSU rushed for 262 yards against Ole Miss last week – Auburn can do better than that.

This week Gus Malzahn hinted at playing Cameron Artis Payne, Roc Thomas and Corey Grant at the same time.   ALL THREE ON THE FIELD AT THE SAME TIME. Do you know what formation Gus might use in order to involve all three players?  Oh yes.  THE WISHBONE.  (We’ve heard of it.)

MSU (They welcome Bert and his pet piglets to the Cowbell Emporium on Saturday. We reaffirm our vow to not pick Arkansas to win ANYTHING in the SEC until they actually win SOMETHING in the SEC.)

Auburn   (Get that force field up, because Admiral blACKBeAR is jumping in from hyperspace—err, Oxford—this weekend.)

Ole Miss (This year’s Waffle House Bowl pits the Committee’s #3 vs #4.  FOR ALL THE HASHBROWNS.)

Alabama  (Tuscaloosa is in meltdown mode with the Committee ranking them 6th.)

Georgia  (Just waiting for Mizzou to lose again to pretty much guarantee they will be in Atlanta regardless of what happens against Auburn.)

LSU (Glorious victory against Ole Miss which, based on the score, must have been played in 1956.)

Kentucky  (They gave MSU all the Dawgs wanted. That QB is very impressive—for a UK QB, at least.)

Arkansas (There are soon-to-be-juniors on this team who have never won an SEC game.)

Missouri   (They will likely finish second in the East, but wouldn’t be as high as sixth in the West.)

South Carolina (We will move the Head Ball Coach and his Fighting Nuggets up here at least for this week, given their strong effort in Jordan-Hare.)

Tennessee  (It’s like they want to be the Arkansas of the East. Hard to know what to make of this team at this point.)

Florida   (Waiting for the other shoe to drop—on Boom. Time for fire up the flight tracking software!)

Vanderbilt  (When you find yourself sweating that upcoming football game with Old Dominion, you know your program has issues.)