Five Areas of Concern at the Midpoint of the Season

As Auburn’s 2014 football season prepares to enter its second half (and can you believe that, already?), here are five areas of play that we of the Wishbone continue to regard with a wary eye. Note that these are not the dreaded “complaints,” but merely areas that we hope our fantastic coaches will address, if they haven’t already.

1. Inconsistency on the offensive line. From failure to opening good running lanes for Cameron Artis-Payne and the other backs, to allowing defensive linemen to bat down a disturbing number of Nick Marshall’s passes, the O-line has been a major concern throughout the first half of the season. We’re not expecting or even asking for late-2013-style “bulldozing,” necessarily—but just some consistent play in at least one phase of the game, giving the offense something dependable to hang its hat on, would be nice. To be fair, much of this is probably not the fault of the individual players. The line has by necessity been shuffled and reshuffled all season in response to injury. Stability would be great here; it would lead to the famed “jelling” that we always want a line to achieve, and that likely will be followed by greater and more consistent success across the board on offense. We hope the week off allowed the coaches and players the opportunity to achieve this, to some degree.

2. The Jet Sweep in general, and Corey Grant in particular, appear to be MIA. Grant had a total of two carries against Miss State. Most of his work this season—something like 80%–has been between the tackles. Why has the vaunted Jet Sweep vanished? Is it simply due to the preference of the coaches? Is it because of the inconsistent line play? Is it due to the substandard blocking by receivers as Grant comes around and turns upfield? Is it something Grant himself has done wrong? We don’t know, but the fact is the play wasn’t gaining much ground when it was being used, and often lost yards. It was such a big part of the team’s arsenal every previous year under Gus, its disappearance is troubling and raises more questions.

3. Over-reliance on Nick Marshall’s legs. The running game is clicking along, for the most part, yardage-wise—but a lot of that has come from Nick having to take off and run. The fact that he’s capable of doing so is great, but we’d like to see the backs raise their proportion of that total and take some of the load off of him. Right now Nick seems like about two-thirds of the offense by himself. Indeed against Miss State Nick had more rushing attempts than any of the backs, including Artis-Payne. (He also averaged a yard and a half more per carry than Artis-Payne.)

4. Trouble on first downs. The running game is more than a yard behind last year’s average on first down runs. This seems to be the first time all season that an offensive stat that we thought was probably lagging behind last year actually is lagging behind last year. Also, all three of Nick’s interceptions have come on first down throws. (And each was caused not so much by Nick making a bad decision as by the defense doing something to disrupt the pass.) This is symptomatic of the other things above on this list. We all know what happens to teams that can’t get “ahead of the chains” on first downs—they find themselves in third and long situations repeatedly—but this is particularly a concern for a so-called “rhythm offense” like ours, which relies on making decent gains on first downs in order to “get it rolling” with the hurry-up and the “tempo.” Mess Auburn’s offense up on first down and everything bogs down.

5. Vanishing receivers. Duke Williams, Sammie Coates and even Quan Bray have had their moments to shine during this season. Unfortunately, for whatever reason, hardly anyone else at wideout has made much of a splash. Marcus Davis is drastically down from last year’s output. Ricardo Louis is a non-factor, as is Tony Stevens. C.J. Uzomah has had one or two brief moments but otherwise been almost invisible. Jaylon Denson must have fallen off the planet after his injury at LSU—last season. Now Stanton Truitt, the freshman, is gone for the year with a shoulder injury. Receiver was supposed to be one of the major strengths of this team, but with the exception of the headliners—and even they have gone missing for long stretches this year—nobody appears to be making much of an impact.

Thoughts on Auburn vs. Spurrier 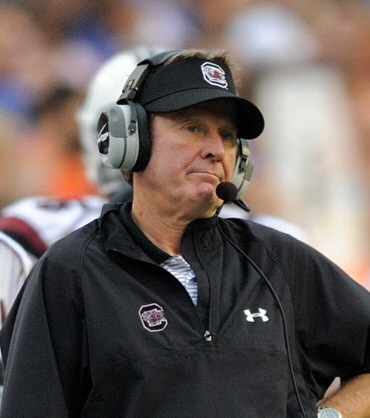 Steve Spurrier exploded on the SEC scene in 1990 and proceeded to shellac a top 10 Auburn squad in Gainesville, 48-7. Pat Dye’s squad had no answers for the Fun & Gun that night, nor did the rest of the SEC, for the most part, through the rest of the decade. Auburn actually had at least as much success against Spurrier’s Gators as anyone, beating them in 1993 at home and in 1994 on the road (both wins exciting and improbable, and both contributing to Terry Bowden’s opening 20-game win streak).

The year 2000 saw Spurrier beat Auburn twice in one year—once in Gainesville and again in Atlanta. Neither win was close. Few would have guessed, however, that those two games would mark the Head Ball Coach’s final wins to date against the Tigers.

In 2001 a cobbled-together Auburn squad that finished 7-5 somehow managed to put themselves in position to beat the Gators on a last-second Damon Duval field goal, just as the sheets of rain washed in towards Jordan-Hare. Spurrier left Florida after that season for the NFL, but of course soon landed at South Carolina, bringing with him a more run-oriented approach that has proven largely successful there. He also seemed to have mellowed a bit; gone was most of the (you’ll pardon the pun) cocky Spurrier commentary he’d exhibited at Florida. This somehow more humble yet still proud Spurrier became much more likeable to many fans, and along with that came also even greater respect.

Auburn’s win streak over the Gamecocks during Spurrier’s tenure (and before) is well-documented; suffice to say that it has included particularly memorable games in 2005 (a 48-7 returning of the favor from 1990, courtesy of Tommy Tuberville and Brandon Cox), 2006 (in which Auburn kept the ball away from Spurrier for the entire third quarter), and 2010 (a heroic narrow win courtesy of Cam Newton at home, and then an absolute road-grading of the Cocks in Atlanta).

If the Ol’ Ball Coach decides to hang up his spurs after this season, even with an Auburn win on Saturday, he can still boast a winning record against Auburn all-time. But it would be by the narrowest of margins, at only 10-9.

Steve, we’ve enjoyed following your career at Florida and South Carolina all these years, and will truly miss you when you are gone. Even when you were beating our brains in, you were always entertaining and never dull. And all your cocky arrogance of the younger days only made it that much sweeter to kick your butt. A tip of the visor to the Head Ball Coach—a one-of-a-kind if there ever was one.

What do we expect from South Carolina?

1. This South Carolina team is not good on defense. While not “Texas A&M over the last few weeks bad” this South Carolina defense is a big step down from the way they have performed over the last several seasons. How bad is it? The 2014 South Carolina defense is last in the SEC in yards allowed per play – worse than Vandy or Texas A&M. They are second to last in scoring defense and in the two road games they have played so far they have allowed 39.5 points per game. They are allowing 16 plays per game of 10+ yards – again, the worst in the conference. While USC has had time to improve (see below) some things don’t change and this is not a very good defense. Auburn’s offense should have a chance to break out and show definite signs of improvement in this game.

2. As with most Spurrier teams, the offense has not been the problem. With an experienced quarterback and an excellent running game this will be one of the better offenses Auburn faces this season. Unlike some other recent games Auburn’s defense cannot be one dimensional in this game – defenders need to tackle well in space and not over-pursue plays.

3. With a week off followed by a game against FCS foe Furman (the Purple Paladins!), South Carolina has had plenty of time to regroup for the second half of the season and to prepare for this Auburn game. We expect them to be well prepared and to have plenty of alignments / formations / plays that they have not shown in the first part of the season. Auburn will need to be prepared for anything in this game.

4. South Carolina pulls out a few new wrinkles early in the game to score some points. Auburn’s offense makes big plays early and often and the defense eventually settles down and locks up the USC offense.

Ole Miss (weird stuff happens in Baton Rouge after dark)
MSU (they will win – but they won’t look like the #1 team in the nation while playing on the road).
Auburn (South Carolina has never beaten Auburn as a member of the SEC – and that steak continues this weekend.)

Bama (They must get tired building and then destroying that Lane Kiffin statue each week.)
Georgia (Gurley will be back soon? “Time to start throwing the ball 40 times per game” thought Bobo.)

LSU (Have they improved or just beaten up weaker competition from the East?)
Arkansas (They lead the league in smiley face stickers for “most improved.” Just not in victories.)
Missouri (Please send ‘thank you notes’ for last week’s gift to Coach Muschamp.)
Kentucky (The new improved Cats will give MSU a good half or so of football.)

Vanderbilt (As dangerous as a lone cotton ball.)