With the SEC’s relaxation of the artificial noisemaker rule the officials at Mississippi State have made a few modifications to the plans for the stadium……..[rubs hands together and chuckles evilly………]

Expectations and dealing with losing

Which felt worse? Losing this MSU game last week or one or the Texas A&M loss in 2012? In some ways losing a game in 2014 feels worse because Auburn hasn’t lost in a while and because the stakes are so high – this Auburn team is a legitimate playoff contender.  While losing a game doesn’t eliminate a team as easily as it did during the BCS era, it still matters a great deal.   On the simplest level, Auburn’s basic goal is to win the SEC West and we are now game behind in that quest.

One of the wonderful things about the 2013 season was that Auburn fans were starved for winning.   After the dreadful 2012 season any Auburn win was greeted with halleluiahs and rejoicing.   And the manner of the wins in 2013 led to even greater rejoicing.   As fans we need to be careful to continue the attitude of appreciating and savoring wins, especially SEC wins, whenever they come.   As Auburn fans we do not want to become like certain fan bases who view those wins as a birthright.

Having said that, what are the reasonable expectations for the 2014 Tigers after last week?  The end goal of winning the SEC again and being part of the first ever College Football Playoff is still a real possibility.   This team has the talent, depth, experience and coaching to get those things done.  Does Auburn face the toughest remaining schedule in the country?  Yes, probably it does.  But we expect this team to improve after the bye week and play well down the stretch.   Not “2013 running game juggernaut well” but very well.   The 2013 Auburn offense was a once in a lifetime wonder and we should treasure that we got to enjoy it.   I am sure that Nebraska fans are always thinking “if only we could be like the 1995 offense again!”   This Auburn team has plenty of talent on offense to do what it needs to do – but it may be in a way that is different from the 2013 Auburn offense and that is fine.

What did we learn from MSU?

That despite a senior quarterback and a lot of experience on both sides of the ball that this team can play poorly on the road. This Auburn team has plenty of players that played at Texas A&M, LSU, Arkansas and UT too and that played in the Georgia Dome and the BCS National Championship game.   But in the first few minutes of the game last Saturday Auburn looked like a young, uncertain team on the road playing a veteran team.  Turnovers, missed assignments, poor execution and lack of composure plagued Auburn in the first 8-9 minutes of the game and at that point it was too late.  The chart below is courtesy of @millsGT49 and SB Nation – it shows the percentage chance that each team will win the game at any point during the game based on the score, time left, who has the ball, etc. If you are interested in the full explanation of how this works go here.

1.  The chart above shows the game slipped away from Auburn in the first few minutes but it also shows another key turning point.  As Van has pointed out this week multiple times the two series at the end of the 3rd quarter (right before the 45 line) and the lack of Auburn success on those series took a game that was starting to move back into Auburn’s direction and made it almost certain that MSU would win.  In those two series Auburn ran the ball three times, threw the ball six times, and gained 32 total yards at a time when the score was 28-20.  If Auburn was going to get back in position to win the game those were the two series to do it and Auburn failed to get it done on offense at that key point in the game.

2.  This stretch also happens to coincide with a recent disturbing trend towards cold stretches after halftime.  Auburn’s rushing and passing statistics are both the worst in the 3rd quarter.  Why is that? Shouldn’t Auburn’s excellent coaches be making adjustments that give Auburn an advantage after halftime? Shouldn’t teams be getting tired from Auburn pushing the pace for more than a half?  Why does this happen? 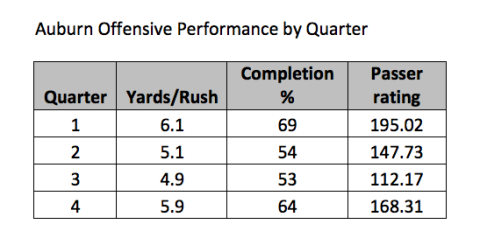 3.  Roc Thomas was a bright spot on offense with his carries.  And we look forward to seeing him play a larger down the stretch.   But let’s not go crazy.  He did almost fumble twice (once on a kickoff return and once on his big run), he ran the ball against MSU’s second string defense, and the coaches don’t quite trust him completely yet.  And yet he averaged 7.1 yards per carry every time he touched the ball and Auburn’s offense could use a few sparks at this point in the season.

4.  The Auburn defense has had an excellent season so far and has improved tremendously since last year but it did not play well against MSU.  And MSU tried to get Auburn back into the game with silly turnovers and a fake punt call that had zero percent chance of success.  In this game the Auburn defensive line could not get pressure on Dak Prescott and he made key throws to keep the game in MSU’s favor.   If anyone was wondering when the lack of Dee Ford or Carl Lawson would hurt Auburn, this was clearly the week.  For the day Auburn had four quarterback hurries and one sack.

5.  On the other side the MSU defense was in the Auburn backfield the whole game.  Nick Marshall was often running for his life and getting a pass off was an adventure.  MSU had three sacks and 13 quarterback hurries and those numbers could have doubled if Nick Marshall wasn’t quite as elusive.

6.  Auburn had a big advantage in special teams but didn’t take advantage of it.   MSU was without its starting punter and punt/kick returner and its field goal kicker is not great.  MSU also fumbled on a return.   But Auburn lost one fumble on a return and almost lost another, missed a field goal and missed a chance to block a punt on the first series of the game.  This was an area where Auburn had a real edge but was unable to leverage it to help win the game.

What do we know about this team at this point? What do we see going forward?

1.  We must let go of the 2013 Auburn offense.  As discussed above this offense may end up being the best in the SEC but it will probably be different from the 2013 hammering running game with a few basic plays.   The 2014 offense will be much more balanced and will probably involve more spreading the opponent out to run instead of pushing them out of the way.

2.  The schedule is still very tough down the stretch but not in the ways we originally thought.    The road game in Oxford now looms as the toughest game Auburn will play the rest of the season.   The South Carolina and Texas A&M home games look more winnable than they did before the season.  UGA is now without the best player in the SEC.

3.  The chances of anything making it through the SEC West without a loss are very low – and some very good teams are going to have 2-3 losses.  We expect the SEC West champion to come down to a tiebreaker scenario.

Bama  (The cure for what ails the Bama offense is coming this weekend – the A&M defense!)

Georgia  (Gurley or no Gurley, the SEC East Champion)

Texas A&M (Clearly the 2nd best team to join the SEC in the last five years.)

LSU (Can we play Jeff Driskel every week?)

Florida   (Fire up the airplane trackers)

South Carolina (Spurrier is spending the entire off week thinking about Auburn….while he plays golf)

The Wretched:
Vanderbilt  (Hey – Charleston Southern is one of the tougher Charleston schools!)