In terms of fame and publicity and all that, lifelong Auburn fan Leah Farrow probably thought being interviewed by, and having her work featured on The War Eagle Reader would be her crowning achievement (totally understandable, and she wouldn’t have been alone). But then Destin Sandlin, the science-loving star of the popular (nearly 2 million subscribers-popular) YouTube channel Smarter Every Day, walked through her door with his super-high-speed camera and filmed her tattooing people in super-slow motion and suddenly she’s the most famous tattoo artist in the world (or at least America and Italy, at least right now).

If you’ve never heard of Smarter Every Day, but remember every TWER post you’ve ever read, Sandlin may look familiar. He did an Smarter Every Day episode on Auburn’s pre-game eagle flight back in 2011. That’s been viewed 88,000 times in three years.

The video of Sandlin explaining (at, like, a million frames per second) what actually happens when needle meets skin at the Timepiece Tattoo Co. in Huntsville where Farrow works has been viewed more than 5 million times in a little over a day thanks in part to posts on BuzzFeed, Reddit, The Washington Post, Mashable, Salon. It’s everywhere. (Can’t see it? Try here.)

“He didn’t tell us who he was, only that he wanted to film with a high-speed camera,” says Farrow, who says the prospect of “seeing tattooing in slow motion” is what convinced her and her partners to agree to letting Sandlin do his thing. “After he left the shop I looked him up and was like ‘holy crap, this guy has millions of views.'”

In 2012, Farrow, who worked at Shenanigans Tattoo Parlor in Auburn from 2010 to 2013, began a half-sleeve of pretty much her own design featuring the Toomer’s Oaks, Samford Tower, a national championship ring, and the words of the Auburn Creed for none other than Lee Ziemba (I interviewed him about it).

“Patrick Miller has a 3/4 sleeve that we’re (currently) working on,” Farrow says.

Oh, and that giant Auburn Creed eagle chest tatt from late last year? Yep, Farrow’s handiwork. And lo and behold, it makes an appearance again at the end of the video.

“My client (Auburn grad Dustin Woodley) with the Auburn Creed tattoo just happened to walk in while he (Sandlin) was there,” Farrow says.

After recognizing Sandlin, Woodley exposed his “Petrie Pectorals” to the camera. 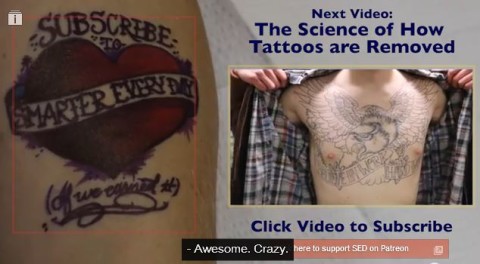 The word Farrow went with for all the attention she’s currently receiving is “insane.”

“I’ve gotten over two thousand new Instagram followers,” she says. She also did one of those Reddit AMA things on Thursday (it has 782 comments so far). And all because she said “sure.”

“Destin called a few shops and I think we were the third,” she says. “We were the only ones that said he could come by.”

Now they’ll probably be the first shop anyone in Huntsville calls for a long time.