Students returning to class at Auburn today are walking all over the Auburn Creed. Or at least the last line of it.

The final words of George Petrie’s 1943 love letter to Auburn have been etched into the walkway of Toomer’s Corner 2.0, which officially opened for pedestrian business Sunday night. 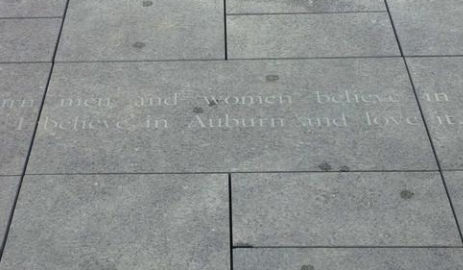 The line “…because Auburn men and women believe in these things I believe in Auburn and love it” can be found pretty much right between the pedestals of the main gate, which should soon have their no longer mysterious eagles back in place.