I lived in Mountain Brook for a few years as a kid and I was not the only Auburn fan. I just wasn’t. Everyone talks about Birmingham and Bama, and sure, Bammerham, I get it. But I swear it was probably half and half, at least in my neck of the woods, at least once upon a time. And you know, the excessive use of orange and blue markers in the stack of get-well soon cards I just found from that time I had strep throat really bad in second grade almost makes me think Auburn was a little ahead among Over The Mountain second graders in the mid-80s.

But the general perception being what it is, the point I’m trying to make is that it’s nice to see, hey, what do you know, this show about modern Brookies–I swear I’ve met the divorced best friend before, maybe we went to Brookwood Forest together or something–doing lunch at La Paz and other modern stuff with a kid named Max, who’s close to the age I was when I moved to Mountain Brook, and who in his one big scene from Monday night’s episode is wearing an Auburn shirt. That’s a show I can relate to! (Even more relatable: They technically live in Vestavia! Where did little Auburn shirt wearing me move to in third grade? Vestavia! And then I went back and played soccer some in Mountain Brook, just like Max! War Eagle, buddy!)

But that’s not the only thing that makes me confident in having “Auburn fans” in the title of this post. Because you’re right, cousins can leave Auburn shirts behind after sleepovers. Babysitters can just happen to have their friend’s Auburn shirt in the back seat as a perfect make-shift solution for an errant splash in an Overton Park mud puddle. And I haven’t looked around, but in 2014 Birmingham there are actually probably plenty of places that a trendy New Jersey transplant like Jamie Primak Sullivan, brand builder to the stars, could just pick up a faux distressed team logo shirt for $40 as something chichi rather than rah-rah.

But look, pause it right there–that’s an Auburn football dog toy. You’re not buying Auburn dog toys unless you’re fan enough to call yourself a fan. Which means, yep, there’s another Yankee Fish Out of Water in the Deep South Show With Auburn Stuff In It we have to start watching, A-U-B-D-V-R! 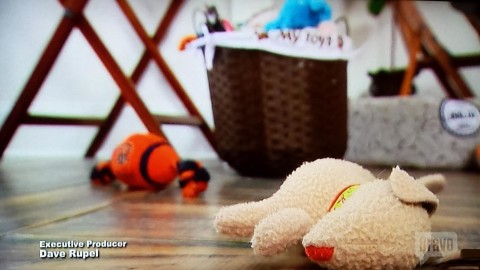 Oh, wait, looks like I’d probably have to keep an eye out even if Max–did I mention the dog I had (and the main character in the book I was reading) in second grade was named Max? This is uncanny—wasn’t playing fetch with a plush Auburn football. Haley Young, another cast member who also looks really familiar, graduated from Auburn in 2007 with a degree in exercise science and a minor in business management. So she’s pretty much living her dream, which allows her to do things like keep up with Auburn football in places like Santa Monica. 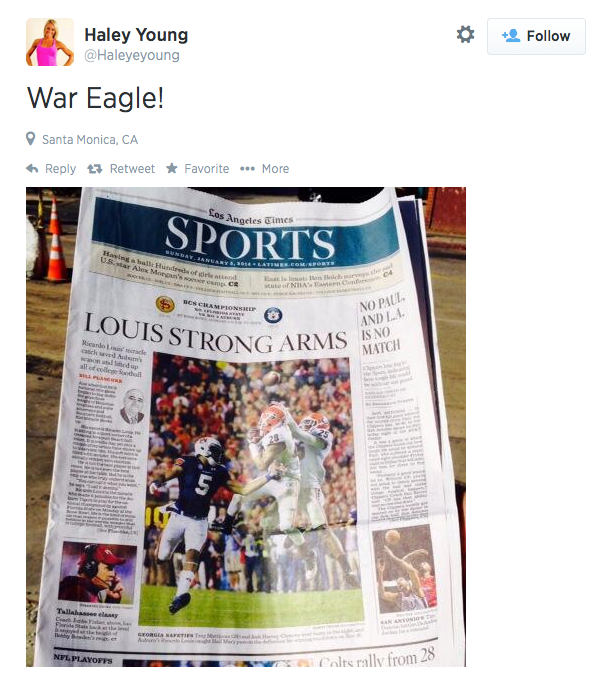