That was the second sentence of Robert F. Kennedy Jr’s October 1993 speech at the University of Alabama.

“I’m a big fan of Alabama football, and I’m not just saying that that. I hate Auburn. I hate it, not just the football team—the whole school, and I would say that if I was talking in Auburn.”

When in Rome, I guess…

Regardless of the reasons, Kennedy’s comments didn’t exactly sit well on the Plains.

To one Auburn businessman, it was a Tiger of an insult.

“I have respected the Kennedy family over the years for what they did in politics,” J&M Bookstore proprietor, and then Auburn city councilman, Trey Johnston told the AP.

“I was just disappointed that one of the members of the family said something like that. He should be more politically sensitive.”

Uncle Teddy was no doubt disappointed as well. And Uncle John probably would have been, too.

Preaching to the crowd is pretty standard for politicians and campus speaking circuiteers and such. George W. Bush opened his 2002 speech at Auburn with a Jumbtron-worthy “War Eagle.”  Alabama (the band) wore Auburn jerseys.

Nine years earlier, Ronald Reagan got boos in Tuscaloosa for praising Auburn. But that’s just what the Great Communicator did—he called it like he saw it. And what he and everyone saw in 1984 was that Auburn was rising—they’d just won a national championship and conquered space—while the Tide was rolling away. But Reagan’s comments were confined to the gridiron, not “the whole school.”

Kennedy eventually flip-flopped, said he was joking and stuff. The apology call to then AU president William Muse was probably painless enough. But the photo he sent (which we’d love to see if you happen have a scan or something)? With him in an Auburn shirt and hat and waving an Auburn pennant? For someone who hated Auburn and would tell Auburn to its face he hated Auburn in Auburn, that had to hurt. Especially after the Tigers won the national championship.

UPDATE: Ask and ye shall receive. Kennedy’s apology pic apparently ran in the papers, and TWER reader Mac Thurston clipped it out. I would have, too. It’s the most AU-kward photo I’ve ever seen. I’m pretty sure the “Officially Licensed” sticker thing is still on the shirt. Are we sure this isn’t a mannequin? What’s he staring at? 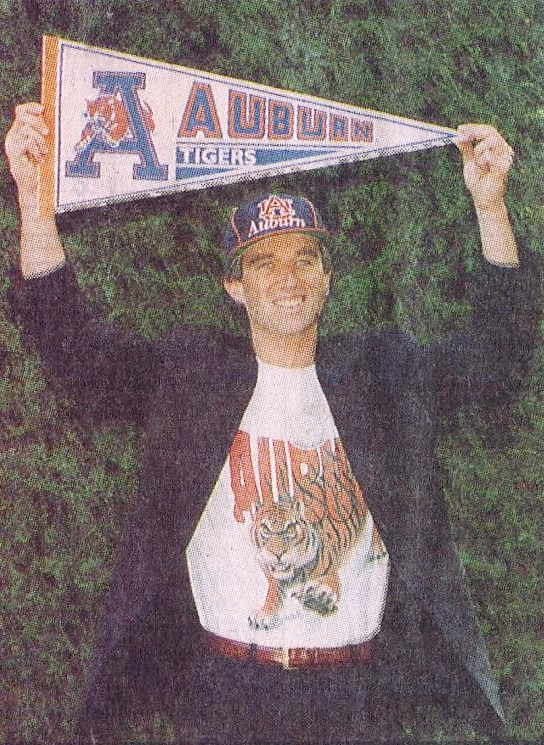 Related: Teddy Kennedy posing with an Auburn Tiger (with an elephant dangling from its mouth).