This go-round, John Carvalho looks at how sports journalism ethics have changed as technology has changed.  You can offer your thoughts as sports content readers below as well, and John will respond as appropriate.  He promises to behave too. 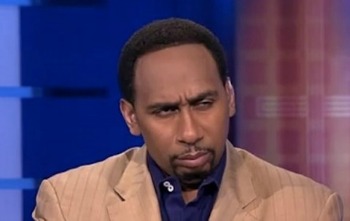 See if you can guess which ESPN personality made the following statement:

“[The] principles and the integrity associated with [print journalism] serve as the backbone for all that I’m about and hope to be professionally.”

Anyone guess Stephen A. Smith? Granted, the quote is from way back in 2007, in a textbook, Strategic Sport Communication. Even so, my students are always amused to hear that.

Smith still shows his reporting chops. He beat everyone (including his fellow ESPN-er Chris Broussard) on the Dwight Howard-to-Houston story. But that’s not what he is known for today

But Stephen A. is not that bad. Even he has to suffer through First Take with Skip Bayless. Smith gets more substantial offerings from the chunks that plunge through the ceiling in his Oberto Beef Jerky commercials than he gets from Bayless.

No doubt, Bayless (who also started in newspapers) and Smith have found a profitable shtick. Apparently ESPN has. But where does that leave sports journalism, particularly for the generation that will practice it in the next few decades?

We have been told that journalists must learn a variety of multimedia skills to survive. Do we also need to bring a variety of writing styles — news, opinion and everything in between, often in the same article? To what extent are we expected to sound like a smarter version of Bayless?

With social media, talk radio and traditional media, your favorite sportswriter has a lot thrown at him/her. It creates a professional minefield, where words written quickly under deadline pressure, then taken out of context, can easily come back to haunt.

When I joined Twitter and started blogging, I did so as an extension of my teaching and research, which centers on sports journalism, particularly its history.

My blogs address issues in sports journalism, often to criticize, it might seem, but more to instruct. I try not to drop random, pointless bombs, even when I’m harsh.

I could declare that on Twitter I do not troll, but given the response I got from some Auburn beat writers when I said that in class, I’ll amend it to, I do not intend to sound like an ESPN pundit, and I certainly don’t offer it as constant fare. Sometimes my wording fails me, and yes, rarely I will just drop something because I find it amusing.

What some might assume to be trolling is often a sincere criticism of something I’ve read. Often I’ll follow up by praising the writer the next time around, and folks will respond, “I thought you hated him/her.” My response to them is that I criticize content, not individuals.

Overall my guiding principle is, “Don’t be that guy,” and I commend the same philosophy to my students and anyone who asks. Even within the context of the previous grafs, I feel that I have upheld that principle. And I feel no motivation to move into Trollville, just to get more followers and clicks.

But those students coming up are getting mixed messages. And they are writing to audiences that include those who cache their columns and scan their LinkedIn profiles for shriek fodder.

In my 1970s student days, it was easier. You either wanted to be a sports cultural essayist like Paul Hemphill, a columnist like Furman Bisher, or a beat reporter like the ones you grew up reading. Now, students can aspire to be all three the same day.

And they do so serving a dangerously empowered audience. Readers/viewers have more choices. They know it, and the media outlets know it — particularly the local ones. Offend readers with basic shoe-leather journalism, and they will cry “hater” and find another site.

Fans always have somewhere else to turn, more than in the past. And it’s just another complexity that today’s sports journalists must face.

It would seem glib and useless to say that each sports journalist must simply set his or her moral compass and stay true to it, but even that is more difficult today. All of the choices were simpler back in the day, the moral options were clearer, and the profession — whether through ethics codes or our fellow professionals — helped keep us in line.

In that sense, Twitter has provided an unintended benefit. As Ty Duffy noted in his musings a couple of weeks ago, Twitter has brought journalists (perhaps more than other groups) together into a community that shares jokes, true, but also discusses issues. Sometimes it’s by direct message, sometimes readers join in for better or worse, but at least the open discussions are there.

Even so, the Venn Diagram has so many circles that I don’t envy the coming generation. They definitely have the technical skills to navigate the new media landscape. Will the way be as sure for them ethically as it was for my generation?

Probably not. But good writing will continue and readers will read. With that foundation, the craziness of everything else will have a harder time taking hold, as the long-term value of “that guy” and his drivel becomes clearer.