Scott Sligh, a 1995 Auburn mechanical engineering graduate, has a confession to make. He told his wife Andi after she found the photos and confronted him. Now, 21 years later, he’s finally ready to come forward publicly.

This is his story.

“It was a Thursday in November of 1993 and I was in Dr. Roy Knight’s Thermodynamics class. I had a pretty good handle on Thermodynamics, so my attention wandered, as it often does. I was sitting near the window that can be seen in the upper left hand corner of the two photos. Auburn was on probation, the Iron Bowl was going to be in Auburn in two days—it was a big deal. As I sat not-pondering thermo, I noticed that the tiles in the walkway outside the window were of a color scheme not unlike that of the team coming to town, and I pulled out a piece of green engineering graph paper and got to work.

“I shared my diagram (complete with instructions) with a neighbor friend of mine who was also in Dr. Knight’s class (he shall remain unnamed to protect the guilty), and at 1 am the next morning, we showed up at the walkway between the Aerospace and Civil Engineering buildings with crowbars and got to work. We only moved the tiles that were required for our project, and we chose to utilize ‘sux’ rather than ‘sucks’ in order to avoid having to pull red tiles from other sections of the walkway. We did have to move one red tile from another section—you can see the lone white tile that replaced that single red one in the bottom right corner of the photo that shows my friend and I posing with our masterpiece.” 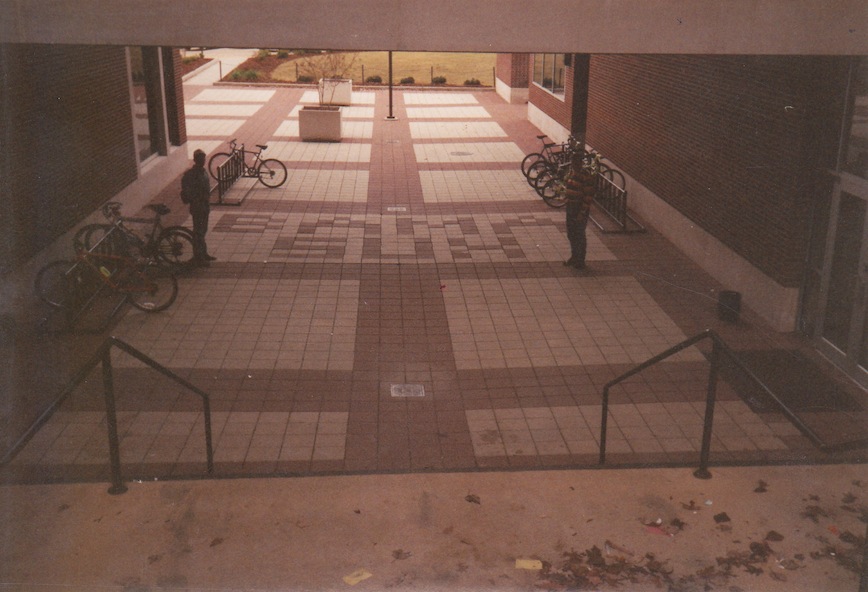 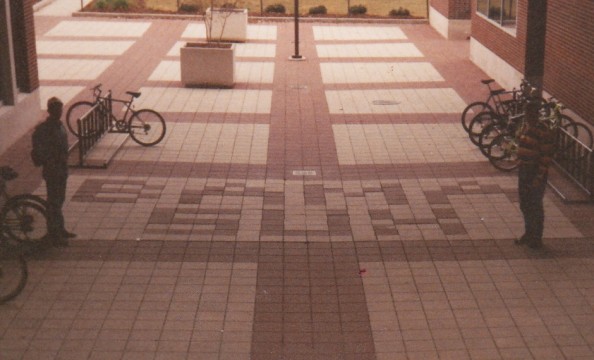 “When we arrived back on campus a few hours later on that Friday for class, the walkway was crawling with activity. People lined both of the glass connectors above the walkway, looking down at our handiwork. Everyone wanted to know who did it and when. We snickered to ourselves but kept mum.

“I was quite proud of our achievement. Proud, that is, until the following Monday morning when I once again sat in Dr. Knight’s class and saw the Auburn University Building Maintenance employee working to put everything back in place. I won’t say I regretted doing it, but I did feel a little guilty that I ruined his Monday morning.”

* Playboy Playmate sneaks into Jordan-Hare
* Auburn students (or someone) planted a giant winter grass ‘WAR EAGLE’ behind Denny Chimes before the 1961 Iron Bowl
* Auburn pranksters explain how they pulled off the great Samford Tower Mickey Mouse clock caper of 1977
* USA Today: 1896 Auburn prank on Georgia Tech second best in college sports history
* Ryegrass reminder of Iron Bowl score planted at Bryant-Denny
* Pat Dye Field violated with script ‘Ohio’ during 2009 Auburn snow storm
* Streaking at Auburn
* The legendary prank-play of Auburn’s most mysterious and winning-est percentage-est coach
* Back in the early 70s, there were bombs going off on Auburn’s campus