In the late, late, late 1950s, there was a revival of the sport that Mike Donahue brought to Auburn in 1912 and that the football players loved and that the students were warming to and that might have laid some deep roots at Auburn had Franz Ferdinand dodged the assassin’s bullet.

I’m not sure if it was organized in 1958 or 1959, but organized it was, to the point that by the early 60’s the Auburn Soccer Club was playing Arsenal—not that Arsenal, but still, the Redstone Arsenal team up in Huntsville had nothing but Germans on it, the smart NASA kind. Not only had they been playing the game all their lives, they were working to play it on the moon. Auburn said bring it.

Of course, at least in the revival’s early days, Auburn’s team was almost entirely international, too. We’re talking guys with first names like Wilhelm and Spiro. Last names like Castro and Nebuchadnezzar. Germany. Mexico. China. Greece. The Auburn Soccer Club was a veritable United Nations assembly dedicated to representing Auburn without their hands.

The club was granted temporary recognition by the SGA in 1960. Two years later, they were still trying to attract “new prospects interested in participating or spectating” i.e. “American students” with cake and punch and Valentine’s socials. It was working, slowly. The hometown column on the team’s roster started to include Dothans and Huntsvilles alongside Hong Kong and Leon (Nicaragua).

But it 1964, the club landed exactly the sort of classic American fan it needed to finally earn not just a tiny brief in the Plainsman but a photo: Miss Judy Breland, Auburn’s soccer’s first sweetheart. 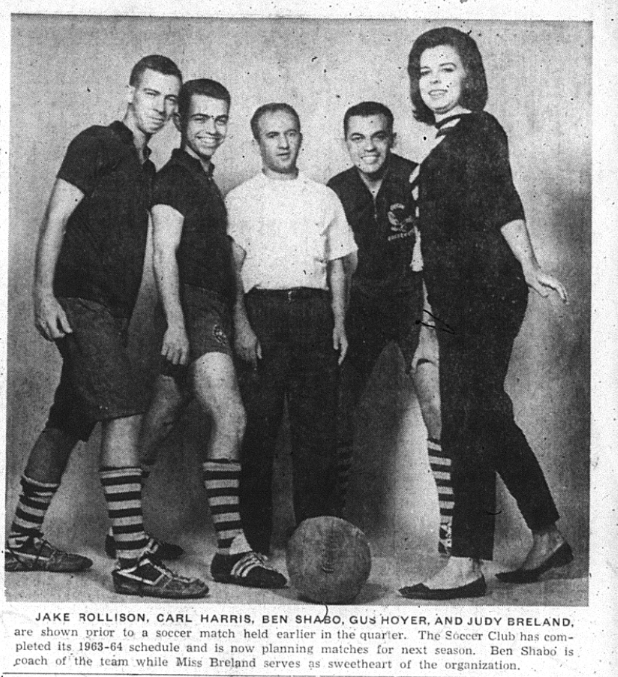 It’d take another six years for the Glomerata to devote any space to the sport. And of course, the year they did was the year the book was burned for being too hippie. But still, times were changing.

Next week, we’ll get to know Auburn soccer studs of the 70s. Matches and mustaches!