The June 27, 1982 flight of the Space Shuttle Columbia was the first ever shuttle flight piloted by two graduates of the same university. Two very proud graduates.

But that fancy copy of the creed may not have been the only Auburn thing astronauts Ken “Played by Gary Sinise” Mattingly (’58) and Henry Hartsfield (’54) carried with them into orbit. Leading up to the flight, the two were given personalized Auburn jerseys, and hat better way to scare off invaders from the red planet… you know what I’m sayin’… 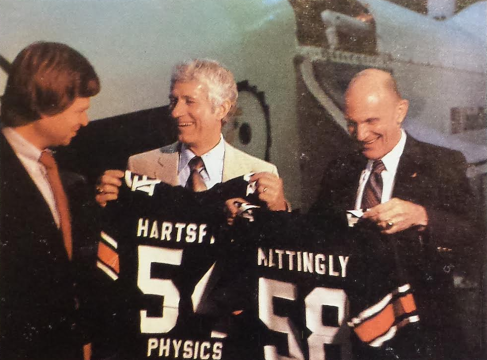 Just minutes before lift off, Richard G. Smith, the director of the John F. Kennedy Space Center who of course was an Auburn graduate (’51), told the thermodynamic duo “Godspeed and War Eagle!”

The Auburness of it all kept up even their return to this realm.

“And now it’s my pleasure to introduce to you two sons of Auburn,” Ronald Reagan greatly communicated.

More than 800 Auburn alumni were employed by NASA in 1982. Hundreds of others were contributing to America’s space program via contractors. More like AUter space.

Related: An Auburn grad was personal vet for Ham the Astro-Chimp, the first ‘American’ in space.