We’d seen the pictures. Tons of pictures. But that the game’s final second wasn’t just the moment when all of the photographers happened to snap their victory countdown shot, but an actual digital hanging chad that could have possibly forced if not a different outcome—Auburn still had possession, so no—than at least stunted the celebration, only became clear (thanks to a comment from Nick) after we posted video of Auburn players and coaches “thankin’ our people.”

“I remember watching the very end of that game, from Bo over the top through the end,” TWER reader Michael Val remembers. “Auburn took a knee on the last play and a Bama player called the last Bama timeout with one second to go. I remember being paranoid that something would happen with another snap. The people flooded the field as Bear and Dye met at midfield for the handshake. While they were shaking hands, the referee came up to Bear and pointed out that a timeout had been called. I remember being able to clearly read Bear’s lips, as he gave a half-wave hand gesture: ‘Just let it go.’ I guess that second never officially ticked off the clock.”

First thought: How in the world was that not revisited as a story angle during 2013 Iron Bowl coverage?

Second thought: Maybe because that’s not exactly the way it went down (though it would have been close enough for me).

Here’s a Birmingham News story on Auburn’s first win over Bama in nine years by Don Kausler that @AU_History found when we were wondering whether the eternal second was even on reporters’ radars. (It was.) 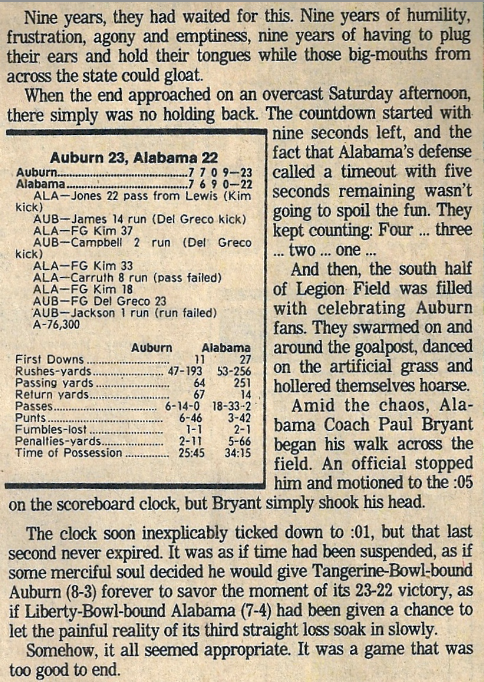 Related: Bloodlettin’ in Birmingham: Pat Dye’s prediction on the 1982 Iron Bowl as remembered by Jim Fyffe.