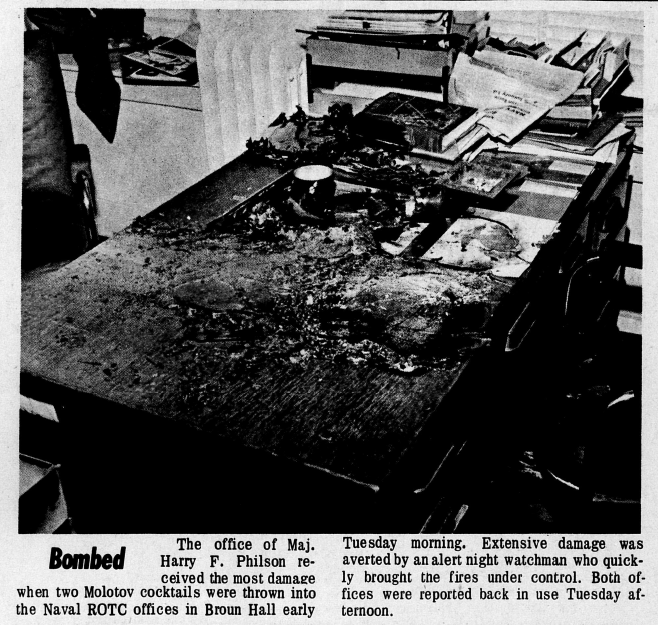 Yet another cryptic message scrawled in a bathroom stall? Man, forty years ago, they weren’t even granting the courtesy of a threat. They were just bombing.

Sure, it was technically a Molotov Cocktail, or “an incompetent version of a Molotov cocktail” as Maj. Harry F. Philson called it, but those are technically still bombs—bomb enough for The Plainsman anyway.

Your headline: “Bombs cause minor damage in Broun Hall.”

It went down at Jan. 26, 1971 at 3:30 a.m. A whiskey bottle “filled with oil and other combustible materials” was hurled through Philson’s ground floor office window. The top of his desk was burned. There was smoke damage on the ceiling. That’s about it.  Another Molotov cocktail made it into Capt. David Barksdale’s office, but only produced smoke.

“Extensive damage was averted by an alert night watchman who saw smoke coming from the building while making his usual rounds and took steps to contain the fire,” Herb White, Director of University Relations, told the Plainsman.

Now, Philson and Barksdale were both ROTC guys. Broun Hall was the ROTC building. But since compulsory ROTC, a pretty big campus issue at the time, had just recently been done away with (BUT WHY!?!), it was deemed just a prank, not a protest. (Most of the fire-starting AU campus protests of the era were actually the work of conservative students.) Still, the FBI got involved. And the State Fire Marshal.

(Someone I interviewed several years ago told me Philson said something to the effect of “They [the bombs] might have worked had the damn hippies paid attention in class.”)

Two years later, on April Fool’s Day (or, since it was 4 a.m, I guess technically April 2), another pretty intense prank went down that once again technically involved a bomb. This time it was Noble Hall.

“Someone threw a military-type smoke grenade into the second floor of the dorm, and the girls could see nothing but red smoke,” Auburn Fire Chief Ellis Mitchell said. “Someone could have easily gotten knocked out in a panic or become injured in some other way and could even have gotten killed.”

It was especially traumatic since an Auburn coed had the week before died from smoke inhalation in her dorm room trying “to extinguish a mattress fire started by smoking in bed.”

Auburn received what was possibly its first bomb threat in 1968.  Harper Hall (Dorm 1) was evacuated just before midnight on August 5 after a man who “sounded like he was crying” called the dorm asking to speak to the house mother.

According to the student who answered the phone, the unidentified caller said “that he had placed a bomb in the dorm and that we’d better get the girls out.”

The evacuation got rave reviews.

“There was no panic and the coeds even sang songs while they waited, said an eyewitness,” The Plainsman wrote. “‘The girls controlled themselves very well,’ added Chief Dawson.”

Dawson and Co. didn’t find a bomb. But one of the ground floor windows had a loose screen. So that was creepy.

Maybe he remembered that Machine Gun Sheila lived there and had second thoughts?

Related: Check out this sexy 1972 ad for Auburn ROTC.