Auburn Basketball got a surge of energy with the hiring of former Tennessee coach Bruce Pearl.

The two-time SEC coach of the year’s arrival on the Plains March 18 was almost instantly the stuff of legend. For David McKinney, left, it will live on in this photograph. 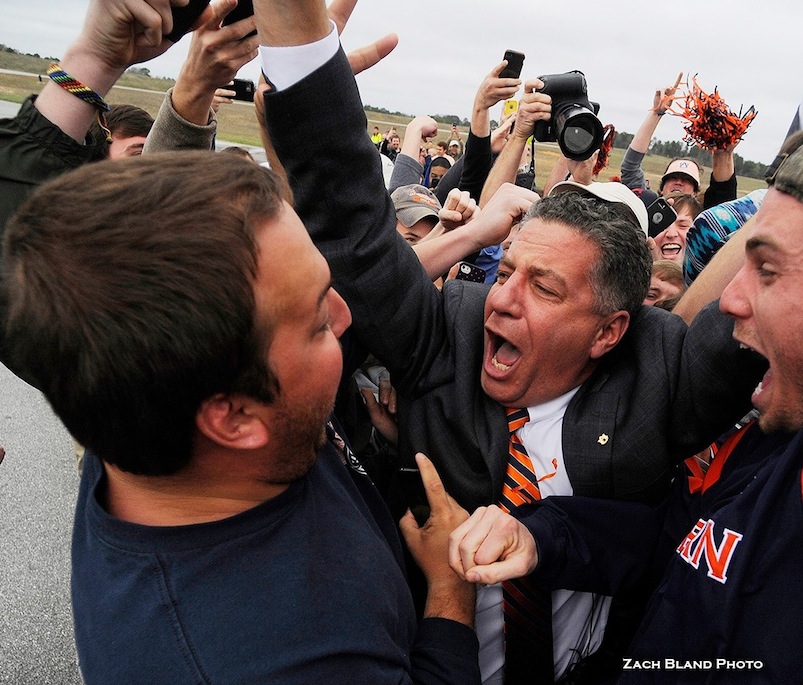 “I saw on Twitter around 10:30 or 11 in the morning that [Pearl] had been hired,” said McKinney, a junior in Journalism at Auburn University. “Auburn Athletics tweeted that his plane was going to land at 1 p.m. and that fans we’re encouraged to go out and welcome him. I’m a pretty big sports fan so I figured why not, I went to [Gus] Malzahn’s airport landing and I didn’t have any classes to go to so I thought I’d just go out there and see what happened. I know he’s kind of a wild card-type guy.”

Pearl, known for bringing a unique personal energy to the teams and schools he’s coached, arrived at the Auburn airport on his birthday to a throng of celebrating fans.

Emerging from the plane, Pearl waved to the crowd for a brief moment before sprinting into the crowd of fans and starting what some have called a mosh pit.

“I was standing kind of on the edge and he runs into this big group,” McKinney said. “I didn’t expect him to do anything like that. It was chaos. I just ran over there and started jumping with everybody and I guess it was just at the exact right moment for the photo to be taken.”

The photo, taken by Auburn Plainsman photographer Zach Bland, shows the exact moment that Pearl’s visit got up close and personal for McKinney.

“It’s probably the most exciting day in Auburn basketball since 1998-99 and we didn’t even play a game yet,” McKinney said. “I think I’ll print it out and get it made into a giant poster.”