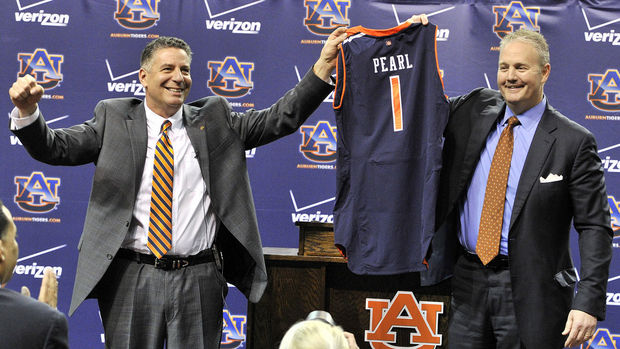 Jay Jacobs said “I just wish he had some personality.”

It took Bruce Pearl less than two minutes to point out Gus Malzahn at Tuesday night’s press conference in Auburn Arena introducing him as Auburn’s new basketball coach . It took him 17 minutes to get around to his wife. In between he talked about his son, his assistants and the need to have your family with you in life.

“Chances are you’re going to see me with my clothes on most of the time,” Pearl said, but that wasn’t the highlight of the night for a man seemingly full of highlights.

And when Jay Jacobs, caught up in the spirit of the thing, took a shot at the media, it was easy to wonder. When the crowd chanted for Gus, and you realized: these might be high water times in the athletic department, you could wonder, is this real? 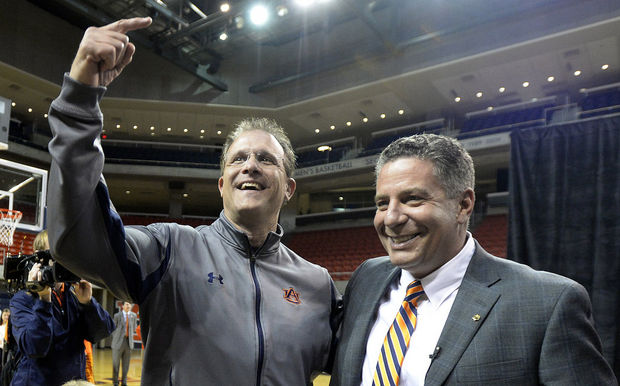 Pearl vowed his team would work hard. He said they wouldn’t be fun to play against. He reveled in the crowd’s adoration. He glowed when he mentioned his contract. He made a joke about whether he could teach a class on ethics. The high-energy pizza provider, the salesman, so pleased to step back into the game he loved said, yep, this is real. And real, now, not next year. Pearl made a point of that: “The players will not hear me say ‘When we get our own players.’ Those are my players, right there, and I’m their coach.”

The highlight of the night was perhaps when he said to the crowd and cameras that he is mindful, “as a coach and even as a father … I let a lot of people down … and so that’s why I still walk around with pain.”

It is hard to imagine Sonny Smith or Tommy Joe Eagles or Cliff Ellis running into a thundering mass of students and fans on the airport tarmac. But Bruce Pearl is saying to anyone who will listen that he is grateful and that he has been humbled. To Auburn folks, that seems real.

And you remember: Auburn loves a comeback. And they’ve got their next feature performer. That’s real.