Saint Michael The Archangel Catholic Church, located on N. College Street in Auburn, puts a new humorous quip or quote up on its marquee pretty much every day. God tells you He’s serious about that love they neighbor thing, Methuselah asks you to be kind to old people, etc.

The offering on Wednesday (which is hard to photograph because the sign was doing that wacky digital wave thing you see when you cameras are on TV screens)?

“Support the ban on slingshots.” — Goliath 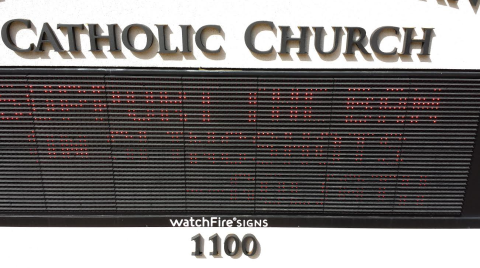 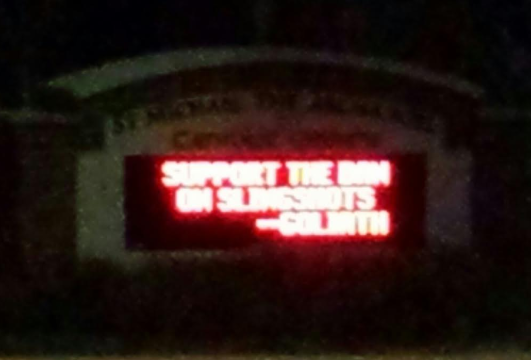 So was the joke, which happened to be selected the day before the NCAA’s football Playing Rules Oversight Panel was scheduled to vote on the ludicrous, T-shirt inspiring, John Heisman-blaspheming 10-Second Rule proposal supported by Alabama coach Nick Saban (and Alabama fans) a subtle jab at the great Philistine of football?

“I gave our secretary a bunch (of quotes) and that’s the one she happened to pick today, so I can’t take credit,” Skoneki said. “But it certainly fits today’s situation.”

“Coach Saban is a good Catholic, actually, a daily mass Catholic. But on the field, he’s more of a Goliath.”